I took the dogs for their morning walk a few minutes earlier than usual. The school bus hadn’t come yet and there were children waiting at the corner. Of course Lulu and Fritzi went berserk. It’s part of their charm, but only Donna and I appreciate it (any day now, I expect the neighbors to demand we not walk them before noon). Mister B kept his cool throughout the encounter, and to be fair, Lulu and Fritzi calmed down when the kids approached to give them pets. 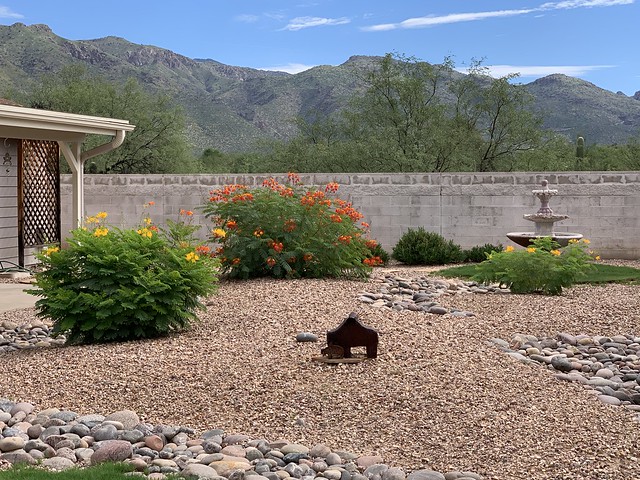 The Mexican birds of paradise Donna planted twenty-some years ago are in bloom again. There are a couple of smaller ones, grown from seeds dropped by birds — you can see one in front of the fountain and there’s another, with red blooms, hiding behind its parent. When we bought this house in 1999, the yard was flat and covered in grass. Landscaping was one of our first projects. We trucked in dirt to make mounds, which we covered in gravel, filling in the depressions with river rock. We left three little islands of grass to remind ourselves we haven’t always lived in the desert.

When Polly’s pet conure Skipper died a few years later, we discovered we couldn’t dig down through the caliche layer under the grass, and wound up burying her in the loose dirt under one of the mounds. The lonely oval rock by the tin javelina is her tombstone. The javelina itself stands over a cat’s grave, another of Polly’s pets.

The mounds are a little less moundy after all this time and the landscaping could use a refresh, but overall the job’s held up. First, though, we need new shingles. And double-paned windows. And solar. It never ends. But hey, having a mortgage payment is like having rent control … it’s our one monthly expense that doesn’t keep increasing!

We’re excited about the new federal ruling authorizing over-the-counter hearing aid sales, set to take effect in October, which should drive prices down. If hearing aids do get cheap, I know what we’ll be giving one another this Christmas. We’ve both lost significant parts of our hearing — no wonder, me being 75 and Donna 76 — and if you were to drop by for a visit we’d be embarrassed to turn on the TV because then you’d discover just how deaf we are.

We’re going to board our friend Mary Anne’s dog Anthony for a few days — she’s dropping him off tonight. Our dachshunds know Anthony pretty well, because he and Mary Anne usually drop by for dinner and a movie on Sunday evening. Fortunately, Mary Anne, while not nearly as old and decrepit as we are, has a bit of hearing loss as well, and doesn’t mind that we watch Veronica Mars with the volume cranked up to eleven.