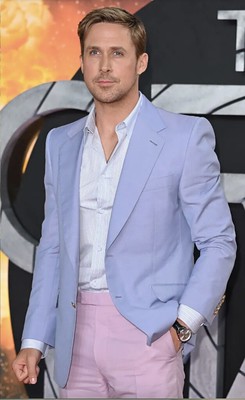 “Elsewhere, Ryan Gosling and Chris Evans were class personified … as they braved the London heat this week for The Gray Man’s UK premiere. While Evans was spotted rocking his beloved IWC Portugieser Chronograph, Gosling’s watch of choice was the talk of the film, literally. Sleek, sporty and elegant is one way of describing everyone’s favourite Ken doll, and the same description applies for the TAG Heuer Carrera Three Hands Gosling had perfectly poking out from underneath his crisp white shirt and lavender blazer. As classic watch poses go, you really can’t beat the Gos’s effortless cool.”

Thanks, GQ. That isn’t squirm-inducing at all.

I recently revealed my interest in wristwatches, obsessing over my modest collection on this blog and social media. Since then my Facebook and Instagram feeds have been flooded with posts from watch sellers and collectors. Seiko sends messages to my iPhone whenever it releases a new design (which is about once a week). Amazon tempts me daily with listings for watches and custom bands.

It’s getting worse: I’ve started to notice the watches actors wear in TV shows and movies. Last night I streamed The Gray Man, a new made-for-Netflix movie, a mindless but entertaining action flick in the Matt Damon/Jason Stratham mode. Even though his hands and arms are in constant motion, mostly beating the shit out of co-star Chris Evans, the camerawork somehow emphasizes Ryan Gosling’s watch.

I thought at first it was just me, more aware of watches people wear since I got into the hobby, but then I started thinking they were doing it on purpose. This morning I Googled “wristwatches in The Gray Man.” The very first link is to the GQ article quoted at the beginning of this post, titled “Ryan Gosling is the king of the Hollywood watch pose – but only just.” And just as the watch on the screen jumped out at me, so did this detail from the article, speaking of the one worn by the star of the show:

[The TAG Heuer Carrera] is also Gosling’s trusted companion in his role as a skilled (and pretty badass) assassin Sierra Six in The Gray Man. Whether or not the watch has Bond-like gadgets, there are no spoilers here so you’ll have to watch it for yourself. But it’s out now, so we recommend you give it a watch and not just for the Carrera’s supporting act — evidence of the beautiful fruits born out of TAG Heuer’s partnership with Netflix.

Yes, an advertising tie-in. Product placement. I should have known. And it was probably specifically directed at one Netflix subscriber, a consumer with a known interest in wristwatches. Me.

That may seem silly now, but get back to me in a few years. 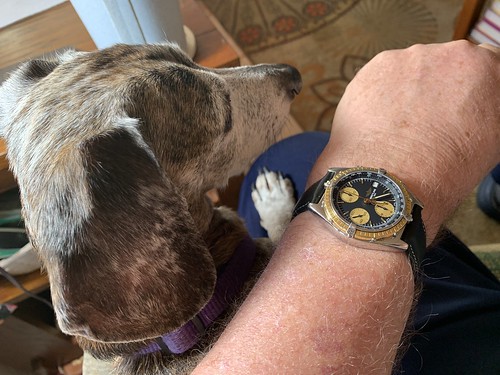 Meanwhile, I”d better stop posting amateurish photos like this and start concentrating on my Classic Watch Pose. Sorry, Mister B, you’re being replaced by a crisp white shirt and lavender blazer.