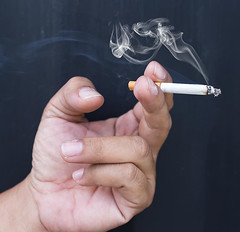 Saw this on Twitter, part of an exchange between people talking about how hard it is to overcome addictions:

“I keep alcoholism at bay by drinking expensive stuff. If I’m ever, by some chance, independently wealthy I’ll need a new strategy. I buy expensive liquor and trust that my inherent Scottish Protestant frugality is more deeply ingrained in my psyche than my desire to drink to excess. ‘Can’t drink too much of that, it’s expensive.'”

Boy, did that ever not work for me. Toward the end I was buying and drinking ever more expensive booze, stupid me hoping I’d achieve a more expensive and therefore more forgiving state of intoxication, smarter me knowing alcohol’s alcohol and hangovers are all the same. Smarter me won and I quit. Surprisingly easily, considering how much I drank. Smoking, now … damn, that was one tough addiction to break. I dreamt of smoking for years afterward and can still, more than four decades on, conjure up the comforting feel of a cigarette resting between my index and middle fingers (I quit smoking in 1978).

Our daughter was summarily kicked out of her apartment several days ago. The manager, accompanied by two large men, let herself in with a master key, rousted Polly out of bed, and ordered her out on the spot. Polly grabbed her cats and fled to our place, minus purse, ID, toiletries, clothes, and everything else. They changed the locks that morning and for the past few days haven’t let her back in to get her necessities. They’re allowing her into the apartment today to gather up what she can in a few hours. Habitat for Humanity is supposed to come by to pick up her furniture; she plans to get everything important, including an expensive sewing machine Donna had lent her, and bring it back here. She’s using my truck, and I expect her to fill it.

She’ll be with us, camping in the guest bedroom, for a while. She has to find another job before she can get set up on her own again. Yes, she’s a mess. The situation she created for herself is a mess. And yes, her mess is now our mess, too. So yeah, I’m kind of depressed. But that’ll pass. It always does.

As previously reported, Donna’s away on a long-planned trip to visit her sisters in Michigan and I’m holding down Fort Tucson. The dogs aren’t happy she’s gone, but they do enjoy the extra room on the bed at night. I’m betting Donna misses having one or two doggie butts pressed up against her side when she sleeps!

No aliens, no spaceships, no invasion of Earth. After reading this fascinating oral history* of the creation of Carl Sagan’s movie Contact, I wanted to watch it again. It’s available through a few streaming services, but at extra cost, so I bought a Blu-Ray DVD from Amazon and plan to watch it tonight. I’ve been going through the seasons of The Expanse on Amazon Prime (I’m on my fourth go-around with that series. still seeing connections and noticing new details in every episode) and devouring For All Mankind on Apple TV. I’ve been a fan of science fiction since my early teens, but I’m pickier now, unable to sit through trash SF (and lordy is there a lot of that). Go into the details and make me believe and I’m yours, writers and directors.

*So if it’s an oral history, how is it a written article and not a podcast, huh?