In 2010, when I started publishing banned book news roundups on this blog, other banned book bloggers rarely did so, instead concentrating on individual, high-visibility stories and reviews of books at the center of censorship battles around the country. That’s no longer the case. 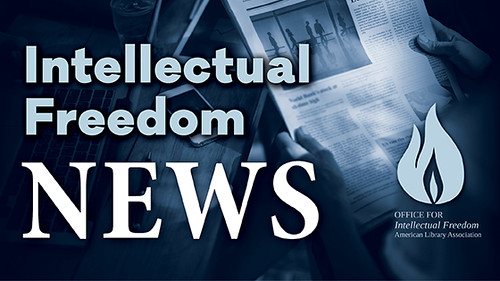 While I have plenty of company in the news roundup arena today, the gorilla is the American Library Association’s Intellectual Freedom Blog, which publishes a regular feature titled Intellectual Freedom News, a link-filled digest of news stories organized in categories: censorship; privacy & cybersecurity; First Amendment/free speech challenges; attempts to ban books and restrict education through legislation; access to books; academic freedom & campus speech; information literacy & disinformation; international news; local stories picked up from the internet and social media. The ALA’s coverage, curated by a paid staff, is exhaustive and frequently updated, so far beyond my puny capabilities I can only stand in awe and steer you in their direction.

I now feel free to do what other banned book bloggers have always done (and what I did in the beginning): read and review the books the banners are so afraid of, while occasionally focusing on banned book news of an especially egregious nature. I’ll also continue to write the occasional opinion piece.

Speaking of which … I see more and more mainstream media stories bemoaning the “divide” between book banners and the rest of us, like this one from the Wall Street Journal (probably paywalled): Battle Over Sex and Gender in Books Divides a Texas Town.

There’s a divide all right, but it’s nothing new. It goes at least as far back as the John Birch Society and the grass-roots opposition to fluoridation of the 1950s. Shit, farther than that: to the Civil War, and before that to slavery. Whether school board protestors and book banners say they’re against young adult novels that depict police as the enemy or transgender kids in locker rooms or teachers grooming kids or libraries hosting drag queen story hours or history classes that make white kids feel bad about slavery and the genocide of indigenous Americans, it always comes down to race and resentment, and if you scratch any of these mouth-breathers deep enough they start screeching the N-word. You know it. I know it. It’s time to gently usher them back into the closet they were in before Trump let them out; to make them ashamed of their retarded beliefs and embarrassed to give voice to them. I know we’re never going to change their hearts and minds, but I’ll settle for shutting them up again.

One last point: I hate the human tendency to see everything in terms of divides, because to posit a divide is to say there are two sides, and that leads to bothsiderism, one of our worst intellectual habits, where we treat all points as equally valid. Which leads to shit like this: Southlake School Leader Tells Teachers to Balance Holocaust Books with ‘Opposing’ Views.