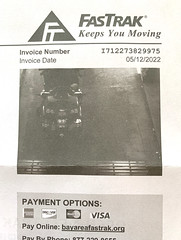 I sold my motorcycle in April. In May the state of California’s FasTrak agency sent me a license plate camera ticket. The new owner (I guess) had blown through an automated toll booth on the Bay Bridge. The bike in the grainy black & white photo was my old ride, but wearing a new license plate. Even though the plate was registered to someone else, my name and address came up in FasTrak’s system and I got the ticket.

I checked the box on back stating the vehicle in the photo no longer belonged to me and explained everything in an attached note. I mailed it back (which cost me a stamp because FasTrak didn’t include a SASE). Weeks went by and then the ticket came back, this time with an added fine for not paying the first time. This was in June. I came *this close* to writing a check … it was only $12, fine included … but then thought what if the new owner blows through another toll booth? So this time I checked a different box on back, the one for disputing the ticket, and included a copy of the same note I’d sent the first time. I mailed it back.

Yesterday, Donna handed me an envelope from FasTrak. I opened it with dread. Inside, a short form letter:

Damn, though, I have to admit I was starting to sweat this one!

I must say, I find this argument less and less persuasive, particularly when it’s couched in such a hostile manner: 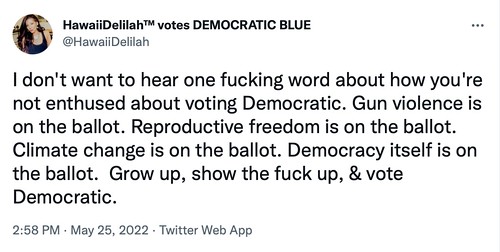 If you don’t count 1996, the year I wasted a vote on Ralph Nader, I’ve voted a straight Democratic Party ticket in every election — local, state, and federal — since 1968.

It’s increasingly clear the only real reason to vote Democratic is to keep Republicans away from the controls. When it comes to positive, proactive action on the very items @HawaiiDeliah cites, the best we can hope for from President Biden and the current leadership in the House and Senate is to dither and fret while Bush- and Trump-appointed judges and agency heads actively work to increase gun violence, strip away the rights of women and minority voters, hasten climate collapse, and gerrymander the system to ensure only Republicans can win future “elections.”

Right. Louis DeJoy is still sabotaging the U.S. Postal Service. Attorney General Merrick Garland isn’t going to indict any Republican leader, let alone Trump, for planning and abetting the attempted January 6th coup. President Biden has made a deal with Senate Minority Leader McConnell to appoint an anti-abortion Republican lawyer to a lifetime-tenure federal judgeship, and if that’s not enough to show you how establishment he is, he’s breaking the climate promises he campaigned on in 2020 to win support from Senator Joe Manchin (support you know he’ll renege on at the last second).

Meanwhile, the hundreds of thousands of voters who gave Al Gore the popular victory over George W. Bush in 2000, and the three million or so who put Hillary Clinton over the top in 2016? We’ve been told in no uncertain terms exactly what our votes are worth. It’s not going too far to say we’ve had our noses rubbed in it. By fellow Democrats, among others.

Yeah, we all know we’re going straight over the nearest cliff the second we let Republicans take the wheel again. But unless someone like Kamala Harris, Pete Buttigieg, or Beto O’Rourke gets the Democratic presidential nomination in 2024, voting Democratic won’t be voting *for* anything … it’ll merely be voting to delay disaster. Call it “Democratic Blue” all you want, it’s still the same old shit.

Agreed. Even less healthy? Being talked down to by fellow Democrats. Jesus, give us something or someone to vote FOR!