Kelly Yang’s “Front Desk” first came to my attention via an October 2021 news story about its banning at an elementary school in New York.

As a teacher read it aloud to her 5th grade class, a school administrator entered the classroom, made her stop, and confiscated the book. The reason? A parent had written a letter. This letter, later reproduced on Kelly Yang’s Instagram account: 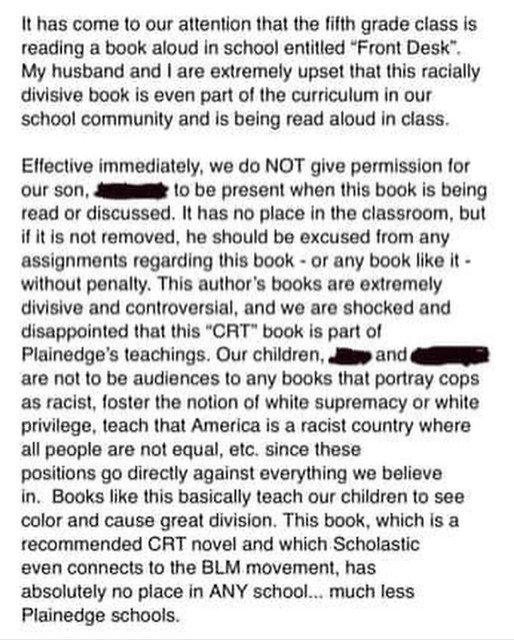 Several weeks later my daughter-in-law, a 5th grade teacher in Las Vegas, told me one of her student’s parents had sent a similarly-worded letter to the principal at her school, and that she’d been asked to stop reading and discussing “Front Desk” with her students. I should note that up until that point, the book had been an approved part of her school district’s 5th grade curriculum.

Since my daughter-in-law now had a copy of “Front Desk” she could no longer use, she offered it to me, knowing I read and review banned books. I jumped on it, and here we are.

Racism targeting Chinese and Mexican immigrants, as well as institutional racism directed against Black Americans, is indeed an explicit topic of this book, presented as the tale of Mia, daughter of Chinese immigrants working as motel managers in Anaheim, California. As a child, Kelly Yang lived and worked at a series of motels with her own immigrant parents, and much of Mia’s tale rings true. As an adult reader, I know the incidences of racism Mia encounters on an everyday basis are not only true but typical. Minority kids will know it too. How about the white kids exposed to this book? If they don’t know it, they need to learn.

This is YA literature, specifically written for elementary and middle-school children, and while some of the messaging may come across as heavy-handed to adult readers, teachers like my daughter-in-law say the book opens kids’ eyes to life as others experience it. The story Mia tells about her and her parents’ lives is filled with upsets and setbacks but is generally upbeat, and thanks to Mia’s pluckiness things work out.

I was surprised by one thing, though, and that is Kelly Yang’s (intentional?) reinforcement of a stereotype of Asians as money-mad Scrooge McDucks, which she does through her portrayal of the story’s villain, Mr. Yao, the cheating and conniving owner of the motel. For a children’s novel meant to help kids learn to see beyond the racial and ethnic stereotypes they’re exposed to every day, this struck a discordant note with me.