You Can’t Read That! is a periodic post about book banning, featuring news and opinion roundups, personal rants, and reviews. 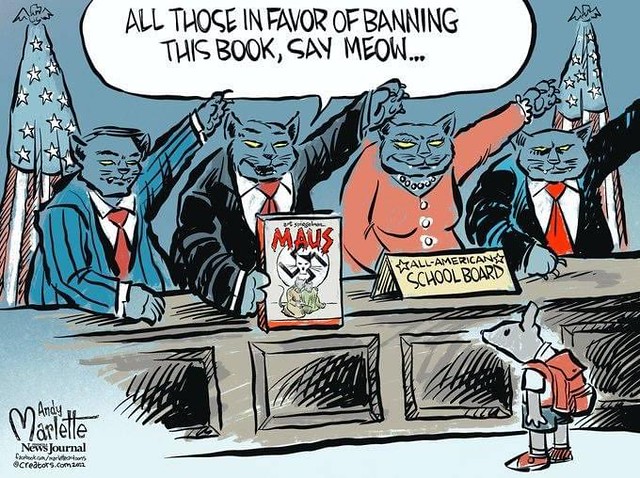 Opponents of book banning take comfort in the idea that banning only makes people want to read the books being targeted, particularly children and young adults, who are rebellious by nature. While it’s true that sales of Art Spiegelman’s “Maus” have soared in the wake of the widely reported banning by the school board in McMinn County, Tennessee, I suspect it’s mostly adults buying copies, not middle and high school students. Yes, a certain kind of student will go out of his or her way to read a banned book. Willow would. The Xanders, Buffys, and Cordelias I went to school with? No.

Book banners are after more than just books. Their protests and complaints, especially those instigated by organized conservative groups, are as much about amassing political power as they are about restricting access to targeted books. Whether or not they succeed in getting individual books banned, they win in other ways. And they keep coming back.

Plus it’s hell on teachers and school librarians. Late last year, a 5th grade teacher I know conducted an exercise with her students, having them act out a scene from an award-winning young adult novel, during which a boy voluntarily played the role of a girl character. That night one of her students told his parents about the exercise. The next morning his mother called the school principal to complain the exercise pushed transgenderism and the “gay agenda.” She went on to complain about the book used for the exercise and advocate for reading assignments promoting a more patriotic view of America.

The first my friend knew there was a problem was last week, when the vice principal demanded she show him all her daily lesson plans and a list of every book her students are required to read, despite the fact everything she’d done was part of the school’s approved 5th grade curriculum.

I read and pass on news story after news story about school administrators caving to parental complaints, end-running established challenged book review procedures, and unilaterally yanking books from classrooms and libraries. It hasn’t come to that pass with my teacher friend, not yet, but I’m pretty sure when push comes to shove, school administrators, despite assurances they’ve given her, will not have her back.

I also read and pass on news stories of educators winning fights over books. But even when they prevail, fights leave scorched earth in their wake. How likely are teachers to assign books or use class materials that might kick off another fight? Will my friend think twice about assigning that book or conducting that exercise next year?

As concerned for the teachers and librarians as I am, I keep thinking of the Xanders, Buffys, and Cordelias. They’re the ones who suffer most, whether they know it or not.

Comment from a YCRT! reader: “Flathead County Montana no longer has an accredited library. The all-Republican county commission has appointed members to the library board who are opposed to the ‘left wing’ American Library Association. They slashed the salaries of library employees and hired a new head ‘librarian’ with no credential (no college degree) who will make sure that the library does not contain any offensive material.”

“The politicalization of the topic is what’s different than what I’ve seen in the past,” said Britten Follett, the chief executive of content at Follett School Solutions, one of the country’s largest providers of books to K-12 schools. “It’s being driven by legislation, it’s being driven by politicians aligning with one side or the other. And in the end, the librarian, teacher or educator is getting caught in the middle.”

Writing While Black Under Scrutiny

Writing while Black in the United States is not as dangerous as driving while Black, but with the rightwing assault on anything that hints of Critical Race Theory, Black authors are facing censorship and book banning.

At Monday’s Hudson Board of Education meeting, Superintendent Phil Herman said “A Girl on the Shore” by Inio Asano will be removed from the high school library, “Lawn Boy” by Jonathan Evison will be returned to circulation and “Gender Queer” by Maia Kobabe will remain off the shelf while it’s being reviewed by a committee.

In what reads as a story we’re seeing frequently across the country, a school principal in Kent, Washington, has removed a series of books from Cedar Heights Middle School’s library in anticipation of potential publicity for those materials being made available to students. This “silent” or “quiet” or “soft” censorship has played out from Pennsylvania to Florida, Wisconsin to Washington, and because it’s so rarely reported, less attention has been shined on these stories than those where protestors show up to school board meetings.

Over the past year, as a nationwide campaign to remove books by and about LGBTQ people or people of color from schools has heated up, Black parents have been getting organized, pushing back against challenges to books that deal with racism and racial identity and calling on schools to reinstate previously banned books. While these bans often occur under the pretext that the books are teaching critical race theory, a decades-old academic framework for analyzing racism in the U.S., Walker said the books being targeted in her state have nothing to do with critical race theory.

Parental “Concern” over Masks, CRT, and Books Is Being Brought to You by Groups Who Hate Public Schools

We’re supposed to believe that these are grassroots efforts led by concerned parents who just want a say in their children’s education. That these groups they form are organic. That those participating in them are, in fact, actual parents in the school district they’re protesting in.

Of course, those of us who are hep know a large number of these people are not so much parents as they are Republican strategists, activists and think tank employees. That doesn’t mean that there aren’t parents who are “concerned” about these things — but it does mean that their outrage about them is being purposely stoked by professionals with an agenda.

“Funding for this year was being withheld until we removed what he called ‘homosexual material’ from the library,” Johnson told WAPT-TV. “His reasoning that he gave was that, as a Christian, he could not support that, and that he would not release funding until we remove the material.”

Book Banning: What Is This Nazism?

An exhaustive list of bannings of modern classics in the USA, including a few actual burnings. Examples: