Our niece Rebecca is home in Bremerton. We had a great visit. She’s a remarkably accomplished young woman, loads of fun to talk with. Her trip home began with a Sunday morning handoff. We drove to the Biosphere, located in the desert north of Tucson. Her friends from Phoenix were there to meet her. We chatted, took some photos, said our farewells, and drove home. Rebecca toured the Biosphere with her friends, stayed with them in Phoenix through Monday, then caught her Tuesday return flight to Seattle. 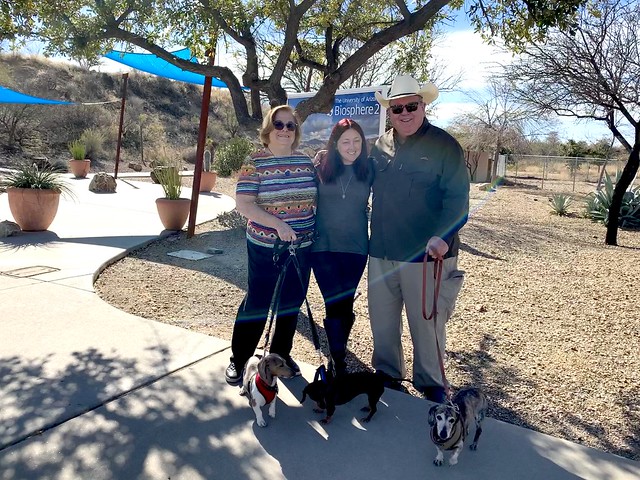 The pups came with us on the Biosphere run, an hour each way; a shakedown cruise for the new girls, Fritzi and Lulu, prior to a much longer drive to Las Vegas we’re planning in March. They did well, initially content to ride in the back seat but later insisting on riding shotgun in Donna’s lap. My lap, of course, belongs to first officer Mr. B. A two-hour car ride with a half-hour break in the middle doesn’t tell us much about how they’ll handle an eight-hour, four hundred-mile trip, but at least we know they don’t get carsick.

When I walk the three of them, the new girls never poop or pee. Mr. B knows what walks are for and always does his business. Fritzi and Lulu haven’t figured that out yet. When we drive to Vegas we stop every couple of hours for Mr. B to take potty breaks. Will the girls understand what the stops are for? I guess we’ll find out in March.

I ordered free Covid-19 home test kits from Uncle Sam this morning. Quick and easy. Now we’ll see how expeditiously the holdover Trump postmaster general* delivers them. Before the week ends, I expect we’ll be able to order free N95 masks, and we’ll take full advantage of that as well.

I don’t see much point in taking a home test unless you’re experiencing symptoms and can’t decide whether it’s a cold, the flu, or Covid. As for taking one simply to say you’re tested and negative, what does that really tell you or anyone else? You can test negative and an hour later catch it from someone else, and that seems to be happening to a lot of people today. New Omicron infections appear to be trending down, at least in cities that report such data, and that’s probably good news, but I think Donna and I will keep masking in public no matter what. Neither of us has been sick … not so much as a cold … for the past two years. That right there is reason enough to keep wearing them.

*Speaking of Louis DeJoy, it’s become clear President Biden never really intended to get rid of him, which means he’s on board with Trump’s kneecapping of the USPS. Meanwhile the Senate is busy failing to protect voting rights, as designed. Biden and his Justice Department could do something to countermand the erosion of voting rights in red states, but they won’t, and that’s probably part of the plan as well. It gets harder by the day to justify voting, when this is what you get when you vote for Democrats.

Meanwhile, the dogs. They woke me at 0545 so I could let them out to pee. I fed them breakfast and they crawled back under the covers with Donna at 0600. Now they’re curled up on the office floor between Donna’s desk and mine. Once I shower and shave, we’ll take our morning walk. Looks like it’s time to toss their bedding in the wash. 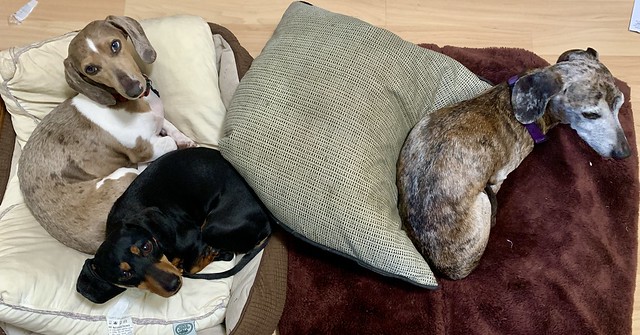