You Can’t Read That! is a periodic post about book banning, featuring news roundups, rants, and reviews. 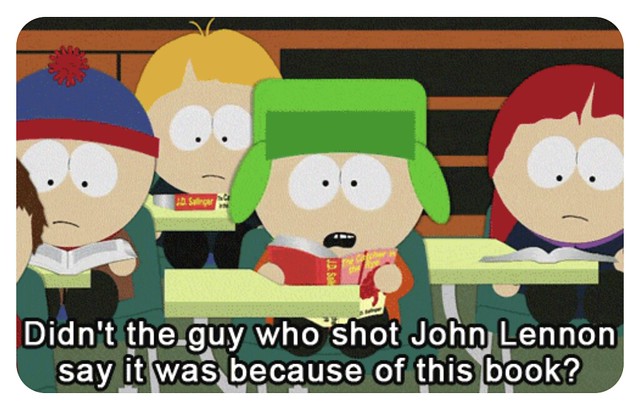 “I wanted to give teens access to books that could be personally relevant or interesting, and prevent groups in the community from pointing out what we could and couldn’t read. It was, “Joslyn said.

“I was worried about censorship in our community after seeing the banned book in Texas and my experience in the Central York School District,” said her mother, Lisa, who helped set up the club. “Unfortunately, we see a group of our community starting to propose a ban during a school board meeting.”

Comment: I hope “The Tale of Scrotie McBoogerBalls” and “The Poop That Took a Pee” are on their reading list!

It appears that the school’s principal removed the book due to his own personal dislike. By violating the District’s regulations, the principal has not only set a poor example for students, he has also deprived the school, and its students, of the advantages of the District’s very sound book challenge policy.

Many parents … cite the novel’s language as the primary issue.

“The book … has 89 instances of the f-word. That is not counting all the other swear words,” one parent said. “This language should not be brought into the school. If every kid walked around the school and said exactly what is being read in this book, do you think that is appropriate? Because I know the Code of Conduct doesn’t think so either.”

This same parent printed out several copies of chapter 23 and underlined every sentence that used a swear word.

“Stop cramming curse words down our children’s throats in order to meet the diversity education,” another parent said. “There’s got to be a better book.”

Incoming Virginia Governor Glenn Youngkin — he’ll be inaugurated Saturday — rode a wave of school board madness to electoral victory in November. Now the situation’s only getting worse. Monday, during its first meeting of the new year, the Spotsylvania County School Board elected Livingston District member Kirk Twigg as the new chair. This is the pleasant man who wasn’t satisfied when the school board voted unanimously a few months ago to have books with “sexually explicit” material removed from school library shelves. No, he wanted them literally burned.

LGBTQ and Antiracist Books Being Review Bombed by Book Banners

A somewhat new factor in this war against antiracist and LGBTQ-inclusive books is review bombing. Review bombing is when a large group of people (or a small group of people with a lot of accounts) leave targeted negative reviews of a product online. When star ratings are involved, this can tank the item’s average rating.

Many of the books that have been challenged the most this year are also getting review bombed, especially on Amazon. These reviews are over-the-top and misleading, and can easily lead consumers who know nothing about this ongoing battle to be scared off purchasing, especially for their kid.

Comment: it’s interesting to look up some of the mentioned titles on Amazon and Goodreads — the review bombs are prominently displayed, and now I wonder why I hadn’t noticed them before.

Officials at North East Independent School District in San Antonio, Texas, have undertaken an extensive review of their school library book collections based on a list of titles circulated by State Representative Matt Krause. The National Coalition Against Censorship is concerned about how that review is being conducted, and has also offered our assistance in helping the District to update its challenge regulations. NEISD is one of Texas’s largest school districts and the first to publicly respond to State Rep. Krause’s investigation into over 800 book titles. Based on media reports and the district’s own statements, it appears that the District has repeatedly violated its own policies when conducting its review.

Perez, a former high school English teacher, says the inspiration for writing the book came from her students, who often lacked reading material that reflected their realities.

“I think, in this moment when marginalized teens are already struggling, it’s imperative that we send a message of inclusion, not of exclusion,” Perez says. “When you say this book doesn’t belong in our libraries, you’re one step away from saying kids with identities like these don’t belong in our schools. And that’s a dangerous message.”

During the meeting, multiple people questioned where and how the line could be drawn should the district begin to ban books in response to objections from a group of concerned parents.

One Kelly Walsh High School student who argued against the banning of the books noted that banning books from schools doesn’t change the reality kids may face after the bell rings or after graduation: “The world is not censored or protected.”

What happened in Eatonville, according to extremism trackers, is bigger than a small-town upset. In recent years, far-right groups have been moving away from national organizing to focus on building grass-roots support, harnessing conservative outrage to influence school boards and other local offices. That effort was stepped up after the Jan. 6 attack on the U.S. Capitol left much of the militant right under federal scrutiny and in operational disarray.

“You can go down to any public library — the public libraries are disasters. They’re actually evil organizations now, because they’re run by the American Library Association, which is a wicked organization at its roots. And so I turned in my library card years ago, and for a homeschool mom to turn in her library card it has to be pretty serious, you know?

“But I went down there and said, ‘No. Your bathrooms are not safe for my children anymore. The books that you’re putting […] up on the shelves for little children to read are dishonoring to the children, and dishonoring to parents. And they won’t tell parents what’s inside these books, so the kids are sitting down and they don’t understand that they’re slowly being lulled into a completely backwards way of thinking.'”

Dear Attorney General Garland: This Is a Crisis! (re: Pornography in Minor-Accessible School Libraries)

“I write now on an urgent public elementary and secondary education matter that has now edged into depravity actionable under the law. It is the availability of pornography to children in schools and libraries, provided to them under any of a number of false covers, including
literature and health education.”

“Minors are the intended audience for obscene and plainly pornographic content and visual graphics found in various book forms, in online curricula and library systems, in open resource material used by teachers without any check or balance, and many other forms of access which in some cases are designed to evade scrutiny, particularly scrutiny by parents and guardians. Into this latter category fall many access points designed to shape children into embracing and then normalizing crudity and adult-minor depravity. Regularly offered in the “safe” and innocuous setting of the classroom or library, graphic sexual information ultimately desensitizes children, in turn causing grave and dangerous confusion in resisting predation.”