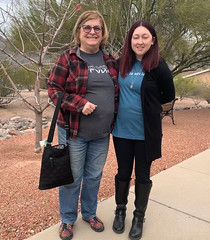 Our niece Rebecca is visiting from Washington. She’s the daughter of Donna’s sister Kathy, whom we haven’t seen in decades, alas. We stayed with Rebecca and her husband Nate at their home in Bremerton in 2015, when we visited the Pacific Northwest for a Hash House Harrier event. She appears not one minute older to us; we’re not going to ask if we look older to her. Speaking of older, though, she wanted to go out last night, and we’re all like What? Go out? What is this “out” you speak of? Too bad her Aunt Polly flaked on us … she’d have taken her clubbing in style.

Rebecca’s hooking up with friends from Phoenix later today, then heading home. We’re driving her to the Biosphere, about an hour away, to hand her off. They’ll take the 1 PM tour after we say our farewells. We’re bringing all three dogs … it’ll be Fritzi and Lulu’s shakedown cruise in the truck. If they don’t piss or shit on the upholstery, we’ll take them to Las Vegas with us in March, when we plan to drive up for our son Gregory’s birthday.

Donna’s brother-in-law John, husband of her sister Robin, broke his neck less than a year ago when he dived head-first onto a submerged rock. Last week, snowmobiling in northern Michigan, he hit a tree and was airlifted to a hospital, where he was treated for internal injuries, including several broken ribs and a ruptured spleen. Donna’s standing by to fly to Michigan if Robin needs her, but it’s starting to look like John will recover. He has the luck of a cat, and as many lives.

Not so lucky, Donna’s two-years-younger brother Chick, who died last week. Chick lost his wife Patty a few years ago and had surrendered to the alcoholism and not-giving-a-shitism that dominated his life over the last decades, so his death, while sad, was not a surprise. Donna and Chick weren’t estranged, exactly … Donna stayed with and cared for him during his recovery from prostate surgery a few years ago … but Chick had withdrawn from the world after Patty’s death and isolated himself from family. Meanwhile, one of Chick’s daughters is involved in a Ponzi scheme and is recruiting new suckers on Instagram. Family or no, I blocked her. Hope she figures out what she’s gotten herself into and gets out before she loses everything.

Reader, I confess to checking on my sisters after Donna’s rough week. As with Donna’s siblings, mine are all younger. Our sister Sue, next in line to the throne after me, died of lung cancer in October 2017, but my other three sisters, Mary, Cecelia, and Charleen, are all well. There’s no cat DNA on our side, so we have to be careful.

“Call it a clan, call it a network, call it a tribe, call it a family: Whatever you call it, whoever you are, you need one.” — Jane Howard