I don’t know, @ColonoscopyToday and @olympusamerica.com, if you want to encourage people to get screened for colon cancer, you might reconsider that photo. Me, I’m running screaming from the very idea of someone snaking one of those up my rear. 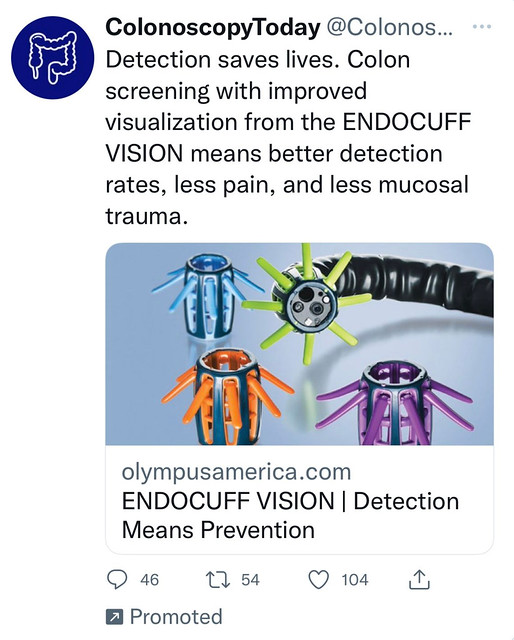 This jumped out at me from a news article: “The issue sat on the backburner.”

What bugs me most isn’t the error itself but the fact that the writer didn’t see the error, or, if he or she did, didn’t care enough to fix it.

There’s a rule for compound words (think breakup or takeoff): they’re one word when used as a noun, two words when used as a verb. “The breakup wasn’t my fault — she broke up with me.” “We didn’t take off until an hour after the scheduled takeoff time.” Most native English speakers know this instinctively and don’t need to consult the rule to get it right. But more and more, I see professional journalists using compound words incorrectly, and I despair. As a former president and war criminal once asked, “Is our children learning?”

Yesterday, as part of the leadup (see what I did there?) to carpal tunnel surgery on my right wrist, I went for an EMG test. I had an inkling what it might involve and wasn’t looking forward to the experience. It turned out to be exactly what I feared: the application of electrodes to my hand, wrist, forearm, and elbow to stimulate nerves, similar to what they did to Mercury astronaut candidates at the Lovelace Clinic in Albuquerque in the 1950s, zapping them so they’d involuntarily clench their fists over and over, sometimes two to three times per second, an image from Tom Wolfe’s “The Right Stuff” that came unbidden into my head the second I learned EMG stands for electromyography.

As I endured the sharp shocks, my hand and arm violently twitching, my fist spasmodically clenching, I kept telling myself to be thankful it was just electrodes pressed against my skin, not the electrified needles they stuck into John Glenn and Alan Shepard’s muscle tissue back in the day. And then the doctor finished with the electrodes and started the second part of the EMG test. The part with the needles.

Yup, they still use ’em. Not the horse needles they used in the 50s, thank goodness. They’re smaller and thinner today, more like acupuncture needles. In fact, the needle part wasn’t as bad as the electrode part. Still, I was glad when it was over.

Earlier, in the waiting area before they called me to the testing room, a lady showed up for her appointment and we sat together for a while. She started talking to me and the receptionist. When we ignored her she talked to herself. It was compulsive; she was clearly frightened. I figured that like me, she didn’t know exactly what she was in for but had a pretty good idea it wasn’t going to be pleasant. When I came out after my session, she was still in the waiting area. “Hey,” I said to her as I walked out, “that was kind of fun.” She’s probably cursing me today.

Meanwhile, I’m cursing myself for succumbing to relentless social media PR and watching “Red Notice” on Netflix, a movie apparently made for children. And that’s all I’m going to say about that.