You Can’t Read That! is a periodic post featuring banned book news roundups, rants, and reviews.

Challenges to school library books, as well as books and instructional materials used in classrooms, have risen sharply over the past two years and show no signs of leveling off. Almost every school and school district in the USA has an established procedure to follow when challenges are received. Typically, it dictates that challenged materials remain in use and on library shelves until a committee formed of teachers, librarians, administrators, and parents has conducted a review and decided whether the material be retained, restricted, or removed. Usually (but not always) the review process results in retention of challenged books and instructional materials.

Unfortunately, principals and supervisors sometimes bypass review procedures, pulling and banning books the moment challenges are received. This has always happened, but it’s happening more frequently now that outsiders (adults who don’t have children in the schools and districts in question, politicians, organized conservative and religious groups, even gun-toting militias) have become involved. These individuals and groups don’t just disrupt school board meetings, they publish and share personal identifying information on teachers, librarians, supervisors, and school board members, subjecting them to harassment and death threats.

Again and again, though, after frightened principals and administrators end-run review procedures and remove challenged books and instructional materials, teachers, librarians, students, and concerned parents react by demanding that established review procedures be followed, and the original decision gets reversed. This too has always happened, and I’m happy to see so many reports from around the country that it continues to happen.

I sense, though, the opening of a new front in the war on books and ideas: attacks on, and attempts to rescind, the review procedures themselves. After all, who formulated them in the first place? Egghead educators and librarians, that’s who, with legal and organizational help from well-known commie outfits like the American Library Association, the American Civil Liberties Union, the National Council of Teachers of English, and the National Coalition Against Censorship.

Oh yeah, it’s coming. And I’ll be keeping an eye out for it in future YCRT! news roundups.

A mix of alarming and heartening news from around the USA:

New headlines virtually every day tell the story: across the country, there is an unprecedented spike in attempts to ban books from schools and libraries. And while efforts to remove books from schools and library collections are not uncommon, librarians and freedom to read advocates warn that this current spike in challenges is different, as it appears to be part of a broader political strategy.

There Were 155 Efforts To Censor Books in Us Schools and Libraries, Group Says

In a statement, the group’s executive board said a few organizations have pushed the idea that “the voices of the marginalized have no place on library shelves” by falsely claiming some books are subversive, immoral and induce people to “to abandon constitutional principles, ignore the rule of law, and disregard individual rights.”

The statement from the library came after students in the North Kansas City School District last week spoke out against recent efforts by a Northland parent group to remove books from the school library. The students urged district leaders not to be swayed by attempts to censor reading that speaks to race and LGBT issues.

“While a portion of the book may be sexual in nature and offensive to some within the community,” John LeMaster, the sheriff’s general counsel wrote, “it fails the third prong of the test” laid out in state law. “Specifically, the third prong requires when taken as a whole, [that the book] be without serious literary, artistic, political or scientific value for minors. This book is a widely recognized award winning piece of nonfiction which deals with difficult subjects of both social and political issues impacting this age group. The book is readily available online and in public libraries. This book does not meet the legal definition of harmful to minors.”

The list of books initially barred from checkout included classics such as “The Handmaid’s Tale,” “Fences” and “The Bluest Eye,” as well as contemporary bestsellers such as “The Hate U Give.”

The rubric for determining which books should be removed from Carroll classroom libraries asks teachers to grade books based on whether they provide multiple perspectives and to discard those that present singular, dominant narratives “in such a way that it … may be considered offensive,” according to a copy of the training document obtained by NBC News. The guidelines are based in part on a new Texas law that prohibits schools from teaching lessons that might make students feel “discomfort, guilt, anguish, or any other form of psychological distress” because of their race.

The York School Department has received a request to remove a book from the York Middle School library from a person who does not have children in the town’s school system, a statement from Superintendent Lou Goscinski said Monday.

An interesting story unfolding in Arizona (next two items):

“As part of the Horizon High School Junior 5-6 Advanced Placement Language Arts class, ‘So You’ve Been Publicly Shamed’ by Jon Ronson was included as an option for summer reading along with ‘Fast Food Nation’ by Eric Schlosser. Students were asked to read one of the two books over the summer in preparation for a classroom writing prompt, which took place in August. ‘So You’ve Been Publicly Shamed’ has since been removed and is no longer an option in the class.'”

Since Arizona’s Family first aired a story about the book in early November, Horizon’s principal has been put on leave. Morton says that’s a fair move on the district’s part. The principal’s leave could also be the reason there were a lot of substitutes on campus Tuesday — the last day of class before Thanksgiving. 34 teachers were not at work, almost a quarter of Horizon’s staff. Some students think it was a show of support for the principal.

Lest anyone think book banners ever intended to stop with K-12:

The backlash against Gender Queer continues:

The books will stay put on library shelves, pending a formal assessment by a committee whose members Toback will appoint. He declined to give an opinion on the issue, saying the review process supersedes his own feelings.

According to media reports, Harrisonburg City Public Schools in Harrisonburg, Virginia, may have violated district policy by removing the award-winning graphic novel, Gender Queer by Maia Kobabe, from school libraries without following any district procedures. NCAC wrote to the school board to return the book to library shelves until the challenge can be properly reviewed and take steps to ensure that the challenge is adjudicated in an unbiased manner, and in accordance with District policies. However, it seems that the book is currently not on shelves because a parent has refused to return it to the library. The district has ordered a replacement and will complete an official review, as required by their policies.

It appears that the District did not follow its book challenge procedures in this case. The complaint about the book was brought directly to the Board, rather than being filed at the school level, as is the norm. NCAC and several partner organizations have written to the District to urge them to return Gender Queer to library shelves until it can be properly reviewed. 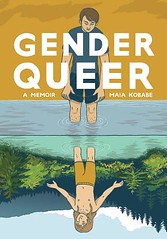 “Gender Queer” is much in the news, with parents, right-wing and religious organizations — even the white supremacist Proud Boys — storming school board meetings to demand its removal from libraries. I read it to see what the fuss is about.

Book banners group “Gender Queer” with other LGBTQ-themed works for young adult readers, a category of books they view as tools for grooming children, subversive propaganda designed to tempt girls and boys to explore and adopt alternate gender identities and sexual lifestyles. But they have a more specific issue with “Gender Queer”: the single page of Maia Kobabe’s 239-page graphic memoir they’ve actually read contains two panels they claim are pornographic.

Viewed in context, however, say by someone actually reading Kobabe’s graphic memoir and not just focusing on drawings forwarded to them by email, the illustrations depict a definitional moment in the memoirist’s life: as a lover pretends to fellate her, she realizes the sex play they’re engaged in isn’t at all what she imagined it would be; there’s no feeling, it isn’t real, it isn’t what she wanted after all. In context, the panels are anything but pornographic.

Some young adult readers will be on paths similar to the one Maia Kobabe took toward recognition and self-acceptance. Like Maia, those readers probably feel isolated and alone. “Gender Queer” will help them find validation, surely a good thing. Hey, it’s not just me, after all! Other young adult readers, working out gender identity and sexuality in different ways from Maia’s, will find validation as well. If Maia’s way isn’t for them, at least they’ll know others their age also struggle to discover who they are.

The key word in “young adult readers” is “adult.” Because that’s what these readers are, and part of adulthood is defining and accepting ourselves. I know it’s anathema to conservative and religious parents, never mind outside agitators looking to impose an authoritarian theocracy on the rest of us, but adulthood begins in high school and high school libraries ought to offer books to help students become adults. Including LGBTQ-themed ones. Even ones that mention blow jobs.

Colbert I. King, in a Washington Post column dated Nov 17, 2021 (link), offers these thoughts, which I very much take to heart:

Kobabe’s book is not just for the benefit of gay, lesbian and bisexual youth. Or high-schoolers working through trans and nonbinary identities. It’s also for so-called enlightened folks such as myself who once had no clear idea what people discussing transgender and nonbinary issues were even talking about.

p.s. I tried to avoid using conventional pronouns in reference to the author, who prefers gender-neutral ones. But I am old and can’t get past the cringiness of the singular they, let alone e, em, and eir.