I’m riding over to Ed’s garage this morning for a bit of moto maintenance on the Goldwing. Just two small things to set right before I post it on Cycle Trader and Craigslist; with luck Ed and I won’t go crazy like we did that time a couple of years ago. 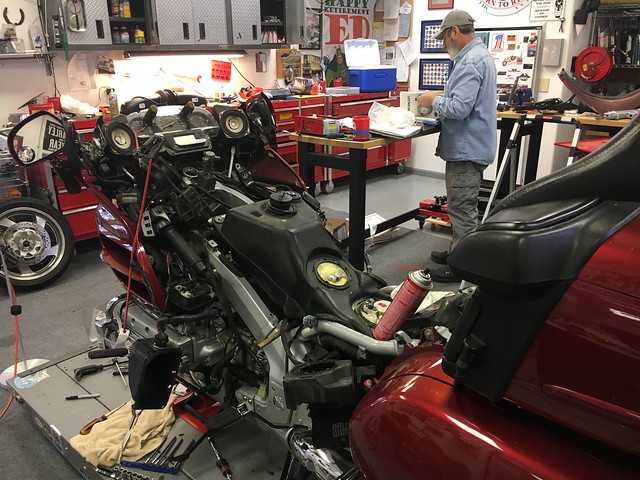 Yeah, that time. So what’s wrong? I can find neutral with no problem — it’s right there between first and second gear where it’s always been — but I have a hard time getting the shift lever in just the right position to close the circuit that activates the green neutral light and enables the starter, and have to wiggle the shifter with my left toe until it does. That would be a major turnoff for any prospective buyer and I want to set it right. Ditto the second issue, an intermittent flashing ABS warning light. Way it’s supposed to work, the ABS light stays on after engine start, then goes off as soon as you start riding and hit 5 mph. Sometimes, after the bike has been parked for a few days, the light starts flashing when I get rolling. If I stop, turn the ignition off, then restart the engine, the light goes out as soon as I’m underway again and everything’s fine. We think it’s a dirty sensor. So that’s what we’ll be up to this morning, and I’m hoping we’ll be done by lunchtime.

A while back a friend who lives in our neck of the woods asked if I’d help her out on October 6th. She wanted me to drive her to the medical park where her husband was scheduled for cataract surgery. He had to be there very early the morning of the 6th and planned to drive himself so she could sleep in. The idea was, I’d drop her off at the clinic about the time her husband’s procedure was supposed to be done, and she’d take them both home in the car he’d driven over. I was planning to pick her up at 9 AM. Her husband was supposed to be done at 10 AM.

So of course the clinic calls her just before 7 AM, telling her she needs to be there during surgery or else they won’t do it. She called to see if I could come get her right away. I threw on some clothes, drove over to her house, and ran her across town to the clinic. With morning traffic, it took an hour to get there. I stopped at a Starbucks for a to-go latte on my way home, so getting back took another hour, making it a two-hour trip, but hey, it was good for the old karmic debit card, which showed insufficient funds last time I tried to use it.

Getting from one side of Tucson to the other is always a pain. The only choices are surface streets, with stoplight after stoplight. There’s a dry riverbed running east to west across the northern part of town that’d be a natural location for an elevated crosstown expressway, but rich NIMBYs have ranchettes by the riverbed and it’ll never happen. Phoenix is a two-hour drive from Tucson, but if you live on the east side as we do it takes three hours and change. Why yes, I’ll have some cheese with that whine.

I know, if we had a crosstown expressway, Tucsonans would start driving across town more often (buying more cars to do it with) and in no time the expressway would be as clogged as Grant or Speedway during rush hour. I have to remind myself that Tucson traffic is a fraction of what people put up with in Phoenix.

Meanwhile, my doctor finally agrees I may have carpal tunnel syndrome in my right wrist. I’ve scheduled a consultation with a hand surgeon later this month. It’s been a problem going on three years now, but lately the fingers and thumb on my right hand have become numb. As a result of that, I have trouble buttoning shirts and picking up small things: pills, keys, coins. Far more seriously, with working zippers. I’ve had to train myself, when I have to go to the bathroom, to reach across and work the zipper with my left hand. Between that and the shirt buttons, I’m getting a lesson in what life’s like for the left-handed. Clothes aren’t made for them.

I walked into the home office the other day in my skivvies, and there was Donna on a Zoom session with the ladies in her sewing guild chapter, the camera in her monitor pointed right at the door … and me. I backed right out, of course, and now I’m looking for one of these to install in the hallway above the office door.

Facebook was down earlier this week, the outage lasting the better part of a day. I managed to read most of a book I’d been pecking at between social media breaks. I think a lot of us, me definitely included, are spending way too much time checking into Facebook and Twitter, and I’m going to try to pull back. That’s my early new year’s resolution. Your mileage may differ, but I think it’d be good if we all did the same thing.

Wanna share every detail of your life with other people? Get a blog!