The U.S. Air Force says it has a pilot shortage. Journalists, and much of the pubic, take the declaration at face value: OMG, the USAF doesn’t have enough pilots to fly its planes!

What’s really going on is somewhat different. The USAF can’t keep experienced mid-ranking pilots, senior captains and majors, from leaving the service. It’s not that it needs them to fly aircraft: the USAF wants those officers to fill pilot-coded non-flying desk jobs, of which there are thousands — at least as many as there are actual cockpits to fill. In fact it’s the threat of having to go to three- and four-year non-flying desk jobs that drives many experienced pilots out. That’s how it was when I was in. Maybe things have changed and there are actually USAF fighters and bombers sitting on the ground with no one to fly them — but I’d be very surprised if that is so.

At any rate, the Air Force wants to train more new pilots and pump them out quicker. Perhaps if there are more pilots available at the senior captain to major level, enough of them can be induced to stay to fill all those desk jobs. To achieve this goal, it’s making changes to its pilot training program.

Before addressing those changes, though, I should explain how USAF pilot training works.

If prospective pilots pass IFT, they go on to undergraduate pilot training at one of four UPT bases: Columbus AFB in Mississippi, Vance AFB in Oklahoma, or one of two locations in Texas, Laughlin AFB and Sheppard AFB. UPT is a 54-week long program consisting of academics, simulator training, and hands-on flying training. All students spend approximately six months flying the Beechcraft T-6A Texan trainer, then move on to six months of specialized training. Students, depending on class standing and demonstrated aptitude at the six-month mark, will finish their training in either the Raytheon T-1 Jayhawk (if they’ve been selected for tankers or airlift aircraft) or the Northrop T-38 Talon (if they’ve been selected for fighters or bombers).

It’s not until student pilots graduate from UPT that they become pilots and put on their wings. At that point they are indeed USAF pilots, but there’s a lot of training ahead before they become qualified in the aircraft they’ve been assigned to.

I know fighters, so I’ll limit my remarks to fighter training. Upon graduation from UPT, new pilots assigned to fly fighters go on to the Introduction to Fighter Fundamentals course, which is conducted at either Randolph AFB or Sheppard AFB in Texas, or Moody AFB in Georgia. In IFF, they learn air-to-air and air-to-ground fighter fundamentals in the AT-38, a modified version of the T-38 used in UPT. IFF, at least in my day, was a one-month program — I don’t believe it’s changed much since then (oops, just checked — the USAF says 40 days).

From IFF, fighter pilots go on to a flying training unit, where they learn to fly and employ the A-10, F-15C or E, F-16, F-22, or F-35. Not only are they learning to fly aircraft far more advanced and sophisticated than the trainers they came from, they learn for the first time to use radar and other complex systems, employ offensive and defensive air-to-air and air-to-ground combat tactics and maneuvers, aerial refuel, navigate and terrain mask at low level, and put weapons — guns, bombs, missiles — on targets. FTU programs, generally six months long, produce fully qualified, mission ready fighter pilots for operational squadrons in the USA and overseas.

So let’s see. So far our new fighter pilot has spent two months in Colorado at IFT, 54 weeks at another base going through UPT, 40 days somewhere else doing IFF, then six months at yet another base going through FTU in his or her assigned aircraft. And that doesn’t count side trips to Florida for water survival, Washington state for SERE school, or Alaska for Arctic survival. Let’s say two years altogether. There’s a similar training process for new pilots assigned to fly airlift and tanker aircraft, and I imagine it’s even longer for new bomber pilots, what with nuclear certification and all.

So why is the USAF making changes to its pilot training curriculum? Well. Budgets and flying hours are always being cut, which affects not only UPT but also the FTUs. Pilots in the training pipeline have to relocate, with associated change of station costs, several times before arriving at their first operational squadron. T-38s are nearing the end of their service life (the last ones were built in 1972) and arguably don’t prepare pilots to fly the current generation of fighter and bomber aircraft. The T-38’s replacement, Boeing’s T-7A Red Hawk, has been delayed in testing and won’t start showing up at UPT bases until late 2023 (more likely not until 2024). 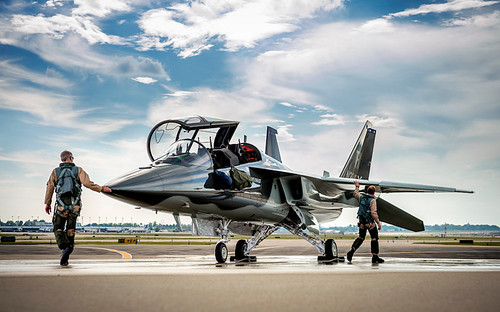 What if the USAF could cut UPT flying time by adding virtual reality training and more simulators? What if it could cut the length of UPT from 54 weeks to half a year? What if it could get enough T-7 Red Hawks to not only replace T-38s at UPT bases but also put a bunch of them at FTU bases so that new fighter pilots could complete IFF and FTU at the same location?

These are all things being considered, and (minus the T-7s, which aren’t ready) put into practice. There’s a test program underway at select UPT bases called UPT 2.5, where student pilots on the fighter/bomber track stay in the T-6 trainer the entire time they’re at UPT, then graduate and go straight to a fighter FTU. Under the 2.5 curriculum, UPT lasts just six months, not a year. The USAF says increased use of virtual reality training and simulators makes this possible, but that’s where opinions differ.

A lot of USAF pilots, in and out of the training command, are worried pilots graduating from the new curriculum won’t be as well-trained as before. So far, UPT 2.5 is an experiment, and I don’t think there’s enough information yet to say whether it’s working, but the USAF is pressing ahead with it.

The USAF has always pursued the idea of cutting UPT flying hours by increasing simulator hours. It was the same when I went through UPT in the mid-1970s. Back then our simulators had neither visual nor motion cues and were essentially glorified cockpit trainers. The instruments on the panel worked, though, and the sim was a great place to practice instrument procedures and approaches. Today’s sims are more sophisticated, with 360-degree visual panels placed around the cockpit, but only a limited number offer motion as well. What’s different is VR training, with comparatively cheap headsets and hand controls that can link two or more students and instructors together for formation training.

Can VR training and better sims replace hands-on flying? Procedures are one thing, but what about the realities of flight? Smells, sounds, sensations — not just motion but choppy, turbulent air; changing crosswinds on final; random radio calls constantly coming in when you’re trying to focus on tasks at hand; other aircraft ahead of and behind you in a crowded traffic pattern; the play of light and shadow passing over the canopy when you fly in the soup; vestibular and visual miscues that give you the leans; the reaction of your inner ears and lungs as you climb and descend?

And then there’s the notion of pushing ever more training tasks onto the FTUs, which, as mentioned, suffer from the same flying hour and cost constraints affecting the UPT program. Will a UPT 2.5 graduate who has flown only the turboprop T-6 trainer transition as readily to an F-15 or F-16 as a traditional UPT graduate with six month’s additional experience in the T-38 jet trainer?

Will pushing more training onto the fighter FTUs lead to more disasters like the one at Shaw AFB in 2020, where a new F-16 pilot, somehow sent from the FTU to an operational squadron without ever getting any aerial refueling training, was sent out to do it for the first time ever on a night mission and was so flustered by his failure to get on the boom he botched his landing and was killed?

These concerns, I think, are what the MILAIR community, USAF UPT and FTU instructors in particular, worry about. That as UPT pumps out new pilots with less training, the burden will be passed to the FTUs tasked to check them out in primary weapon system aircraft (fighters and bombers, but tankers and airlifters too — there’s even talk of retiring the J-1 Jayhawk and substituting simulator training only for UPT students finishing the T-6 Texan phase of training and moving on to tanker and airlift training). The fear is that the FTUs will in turn pass critical training tasks on to operational squadrons, which even now are beginning forced to take on less than fully qualified mission ready pilots.

By the way, it’s not just the USAF looking to make cutbacks to pilot training.

I blame Star Wars. George Lucas made it look like just about any young farm boy from the sticks, given a light sabre and a bit of VR training, can hop in an X-wing and score a shack on an Imperial Death Star.