All Over the Place

The internet says mourning dove squabs start to fly 11-15 days after hatching. I could swear it’s been only 10 days since the two on our patio hatched, and we saw one fly this morning. It didn’t go far … just to the top of our backyard wall (where the cat claw vine is in bloom). More free internet knowledge: once the squabs fledge, they’ll stay close to the nest for two weeks while their father feeds them. After that they’re on their own!

Huh. Maybe instead of taking parenting lessons from Dr. Spock, we should have listened to the birds.

West Point decided to punish 50 cheating cadets by forcing them to repeat a year. U.S. Military Academy alums are outraged, because the honor code famously demands immediate expulsion for lying, cheating, and stealing.

Gotta say, though, the first words I heard after showing up for officer training at Lackland AFB in 1973 were “cooperate and graduate,” and they followed me through a 24-year Air Force career. There’s no way to polish the turd … “cooperate and graduate” boils down to cheating, mostly through sharing answers to standardized tests. C&G is deeply entrenched in military culture, and my Air Force Academy squadron mates were as likely as any lowly 90-day wonder to pass around a pony for an annual instrument refresher or stan/eval written test. I can’t believe it’s any different at West Point. As with any other iron rule, “a cadet will not lie, cheat, steal, or tolerate those who do” has shades of meaning.

Twice in the past few days it’s hit me there’s more advertising on Facebook than ever before. I decided to quantify my observations. To do it, I categorized posts on my newsfeed: posts from friends, outright advertising (sponsored and Facebook-suggested posts), and referred posts from commercial entities I or my friends “like.” In a single sitting, I started counting at the first post and stopped at the seventy-fifth. Here’s what I got:

I can’t prove it, because I never counted before, but I could swear the level of advertising on Facebook has skyrocketed … just look at the first two categories: three “real” posts to twenty-seven ads (add to that forty-five additional posts from commercial entities I or my friends have “liked,” which though sometimes interesting are still a form of advertising). It’s an overwhelming deluge of advertising by anyone’s definition.

I posted my count to Facebook, where a friend gently chided me with this comment: “Well, for the money you’re paying, I find that outrageous.” Yeah, a lot of people feel that way … nothing is free, suck it up.

But see, Facebook isn’t free. We do pay. We pay the same way we pay for radio and network TV, by being an audience for commercial advertising (and, less visibly, by having our personal data and shopping preferences shared with corporations large and small).

I’m not alone in abandoning AM/FM radio and network TV for subscription streaming services, not just for the content they offer but to get away from the constant and ever-increasing barrage of ads. Apart from NPR and my nightly dose of Rachel Maddow, I listen to streaming radio and watch streaming TV. I willingly pay for subscriptions to Sirius/XM, Netflix, Amazon Prime, Hulu, and HBO Max … as do millions of other consumers. The market is there for a subscription model for social media, premium versions of Facebook and Twitter, without ads. I’d pay for that, and I bet many of you would as well.

Nothing is free? The original “social media” for me and many of my friends was the Hash List, the email list service for Hash House Harriers. Hash-L, as it’s called, is still going strong … free to use, free of advertising. As are many blogs, including this one. Wikipedia is free. Some news sites (aggregators, certain newspaper & cable news outlets, and the excellent Wonkette) remain free and unencumbered by ads. How do they do it?

Be happy they do, I guess!

While you’re here, enjoy this bit of ad-free content, adapted from the Shaft theme by yours truly:

Who’s the tubular dictator
That’s a sex machine to all the chicks? (Un!)
You’re damn right
Who’s the man that would poison his brother, man? (Un!)
Can ya dig it?
Who’s the cat that won’t help out when there’s starvation all about? (Un!)
Right on
You see this cat Un is a bad mother (shut your mouth!)
But I’m talkin’ about Un (then we can dig it)
He’s a complicated man but no one understands him but his tailor (Kim Jong Un)

Hey, you get what you pay for.

I dropped by the local library yesterday. They’re still into “deep cleaning”: wiping down interior surfaces, sanitizing returned books before putting them back on the shelves, hand sanitizer stations everywhere you look. Haven’t we known, for months now, that COVID-19 is transmitted by airborne droplets, not from germs on surfaces? Deep cleaning has become a thing in itself. Even when we know it’s for show, with no real effect on transmission, we keep on doing it, and probably will for some time to come.

Yesterday there was a flurry of op-eds like this one in The Atlantic, titled Are Outdoor Mask Mandates Still Necessary? We were thinking about that last week on our trip to the Grand Canyon and Sedona. We’re fully vaccinated, and while we agree it’s necessary to keep masking up before going into stores, restaurants, and other enclosed spaces (because we want others to feel safe around us … how do they know whether we’ve been vaccinated or not?) we didn’t think we needed to mask up outdoors. Walking around outside, there’s plenty of air, and we kept our distance from strangers. With few exceptions, they stayed out of ours.

I feel the same way about deep cleaning. I’ll happily squeeze sanitizing gel on my hands at shops and offices where they want me to do it, knowing it makes them feel safer, even though it’s mostly for show. It won’t be long now, I think, before deep cleaning and outdoor mask mandates fade away.

I’ll close this collection of random thoughts and observations with a remembrance of Daniel “Chappie” James, Tuskegee airman and the first Black man to attain four-star rank in the U.S. military. He earned his combat chops in Korea flying P-51s and F-80s, and later in Vietnam flying F-4s, where, as a member of the 8th Tactical Fighter Wing Wolfpack, he was deputy commander to another larger-than-life fighter pilot, Colonel Robin Olds. 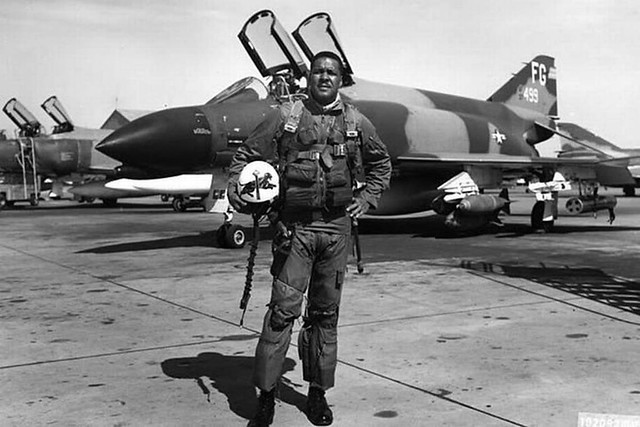 I was an Air Training Command instructor pilot from 1975 to 1978, during the time Chappie James, by then a four-star, ran North American Air Defense Command. Sometime in early ’78 I flew a T-37 cross-country from Vance AFB in Oklahoma to Tyndall AFB in the Florida panhandle, where Air Defense Command pilots trained in F-101B and F-106 interceptors. These were Chappie James’ airmen, who in those days flew in orange flight suits.

I dropped by the Tyndall Officers’ Club that night and was the only guy in a green bag in the stag bar. At some point I went looking for the head, which was down a twisting corridor behind the bar. As I made the first turn, two Black full-bird colonels in dress blues came walking briskly toward me, as if clearing the way for someone. When I turned the second corner, I was face-to-chest with Chappie James, who was wearing an orange bag. I had to tilt my head back to look at his face … and I was six-foot-four in those days. I knew instantly who he was and said “Good evening, sir!” “Good evening, captain,” he said, and that is how I once met a living legend. I doubt he remembered me, but I will never forget meeting him.

2 thoughts on “All Over the Place”