I have a friend who likes to offer contrarian takes on the news of the day. In one of her recent Facebook posts, she asserted that no one’s talking about the fact that it’s Black Americans who are committing all these attacks against Asian-Americans.

Well, maybe no one’s talking about it because it’s not a fact. Or is it? Sadly, it appears there’s at least some truth in my friend’s assertion. This is from a Voice of America article on anti-Asian hate crimes dated March 24, 2021:

“In New York City, where anti-Asian hate crime soared nearly nine-fold in 2020 over the year before, only two of the 20 people arrested last year in connection with these attacks were white, according to New York Police Department data analyzed by the Center for the Study of Hate and Extremism. Eleven were African Americans, six were white Hispanics and one was a Black Hispanic. … Most police departments do not publish this kind of data, but anecdotal evidence suggests the pattern seen in New York has emerged in other cities, as well.”

Which in no way lets white racists off the hook. They’re the ones who commit almost all race-motivated hate crimes in this country (and all the ones carried out with assault rifles). They’re the ones who voted for Donald Trump, who calls COVID-19 the “China Virus” and “Kung Flu,” which you can’t tell me isn’t a major factor in the wave of hate attacks on Asian-Americans, regardless of who the attackers are. But right-wing media will seize upon every instance of a person of color attacking another person of color, because it plays to a white racist audience always looking for ways to let themselves off the hook, and I’m afraid a lot of the contrarian “hot takes” my friend likes to revel in come straight from Fox News and Parler.

It’s hard not to think about race, even when you don’t want to. As much as I love the colorblind societies of the future depicted in science fiction, I wonder if the writers of those shows and books think they’re having any impact on racism in the here and now. I wonder the same about erasing race from the past, as in the musical Hamilton, where actors of color play historically white figures; as in the streaming TV series Bridgerton and The Irregulars, where characters of color (played by actors of color) play important but ahistorical roles in societies that never would have let them in the studio, let alone onto the set. Will any of this change racist hearts? Or is it just a way to make ourselves feel better about ignoring the racism that’s all around us, every minute of every day? 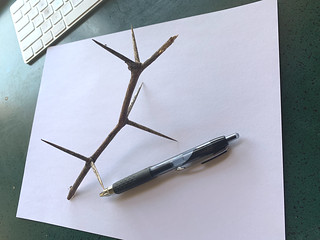 I’ve been picking these things out of the rocks in the back yard. They’re twigs from the dead mesquite trees we had removed last month. The tree crew cleared the back yard of limbs and branches that fell into it, but missed a lot of these twigs, which nestle in the rocks (and depending on the angle of the sun can be almost invisible). The spikes are arranged like those on jumping jacks and WWII tank traps … no matter how they tumble around on the ground, some of the spikes always point straight up, and brother, they’ll penetrate the toughest book sole. I learned my lesson about picking these up while wearing Crocs the first day!

I go after these deadly twigs with a bucket in one hand and a long grabber stick in the other, like a convicted drunk driver picking up trash alongside the road. When the bucket’s full, I dump it into our outdoor garbage bin. Usually, when I walk back over a section I’ve already picked clean, I find several I missed, so it’s going to take a while to get them all. After half a hour my right hand starts to cramp from squeezing the grabber stick’s lever and my back begins to ache from bending over, so I’m doing the job in short bursts with plenty of breaks between. I wouldn’t last long at Amazon.

Two nights ago Rachel Maddow asked about the nationwide workplace mask mandate President Biden directed OSHA to formulate by mid-March, but which so far is nowhere to be seen. I suspect the Biden administration is being timid, knowing any such mandate would run directly counter to the anti-mask policies of red state governors and conservatives in general, not wanting to pick a huge fight it may well lose in the courts (and probably in the media as well).

Rachel brought up workplace mask mandates on the same day I visited our butcher shop in Tucson, where none of the employees wore masks or observed any kind of distancing behind the counter. I was honestly shocked. You wouldn’t think there’s anything inherently right-wing about butcher shops, but this one obviously is, a little eddy of spite and denial in the sea of responsible establishments that make up Tucson’s business community.

Our governor lifted Arizona’s mask mandate, but the city of Tucson says not so fast. Tucson’s mask mandate certainly applies to the employees of that butcher shop, which just goes to show the city isn’t enforcing it. For what it’s worth, I’m happy to report the customers on the other side of the counter, yours truly included, were masked up.