“’Stocking up’ is what our robust Americans called it, laughing nervously, because profligate abundance automatically evokes its opposite, the unspoken specter of dearth.”
— Ruth Ozeki, My Year of Meats

My Year of Meats
by Ruth Ozeki

A friend read a book I recommended and in turn recommended this one to me. I was put off by the use of the word “intersections” in the blurb but after reading the first few paragraphs was intrigued enough to press on, and before I knew it the story swallowed me whole.

From the bridging selections from Sai Shonagon’s “The Pillow Book” (which I now have to read), to the stories of the women chosen to appear in My American Wife episodes, to the personal and intimate life stories of Jane Takagi-Little and Akiko Ueno, “My Year of Meats” is arguably a women’s book. But that’s like saying Upton Sinclair’s “The Jungle” is a butcher’s book. This is a human book, deeply so … as well as a modern-day update to Upton Sinclair’s expose of the meatpacking industry.

I feel educated. And I don’t resent it, so personal and moving is the story Ruth Ozeki tells in this novel. I became emotional in parts. I came to care … a lot … about her fictional characters. That’s some damn good story-telling.

Okay, so Ozeki wraps things up a bit too neatly at the end. That’s a ding, and other reviewers have commented on it. Hence 4.5 instead of 5 stars. If you look at the summary list of the 710 books I’ve reviewed on Goodreads, you’ll see I’ve given 5-star ratings to just 4 books. And damn few 4.5s. That should tell you how much I loved this book.

“Isserley always drove straight past a hitch-hiker when she first saw him, to give herself time to size him up. She was looking for big muscles: a hunk on legs. Puny, scrawny specimens were no use to her.”
— Michel Faber, Under the Skin 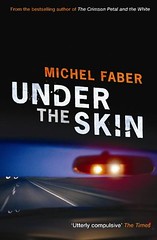 Under the Skin
by Michel Faber

“Under the Skin” was a lot of fun, not at all what I expected. It’s a literary but also somewhat old-fashioned science fiction story encompassing the psychology of personal growth with a matter-of-fact presentation of alien goings-on in the Scottish countryside. I think I read somewhere that Michel Faber is a master of the strange. The understated strange, is how I’d put it.

I lingered over incidences of Isserley’s determination to “unsee” the sentience of the creatures she harvests … us, if that’s not too much of a spoiler … despite living in man-made structures on a farm, driving man-made cars on her capture missions, watching vodsel television, stopping for gas and snacks at roadside shops, even conversing with the hitchhikers she picks up along the A9 (before she toggles the switch). Most telling is when the rich kid Amliss comes down to visit, sets a few of the vodsels free, and tries to justify his opposition to the harvesting to Isserley. He obviously suspects the structures on the farm were in fact once vodsel dwellings, and is on the cusp of grasping the enormity of what his race is doing to another sentient race. Isserley, without a second thought, dissuades him with bullshit. She knows, chooses not to know, but Amliss’ misgivings get under her skin anyway.

It’s a curious coincidence that I read “Under the Skin” immediately after reading Ruth Ozeki’s “My Year of Meats,” a novel with a strong and disturbing message about the harvesting and eating of meat. Isserley, who mostly subsists on vegetable-based processed food, at one point devours a bit of vodsel steak and is rhapsodic over it (this while knowing and yet not knowing what she’s eating was once a sentient being). I can relate, because despite the horrors of the meatpacking industry (and my Twitter friendship with the famous M_Crouton), I still crave a good steak myself.

Oh, I’ll just mention that a third of the way through “Under the Skin,” I typed “vodsel” into Google search, thinking it might actually be a Scottish slang term of some sort. I bet others have done the same.

I had not read Michel Faber before. I now have his latest novel queued up, “The Book of Strange New Things.” 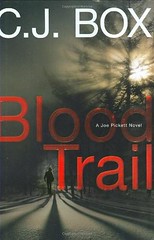 It’s a struggle to write meaningful reviews of individual novels in a series. Unless I have something urgent to say about individual Joe Pickett novels, I’ll repeat what I said about “Open Season,” the first novel in the series:

The continuity between individual novels of the Joe Pickett series binds them together in such a way that I can’t imagine choosing to read them out of order. In “Blood Trail,” C.J. Box reintroduces several characters from earlier novels, concluding a few character arcs in most satisfactory ways. Damn, these are fun stories, consistently good.

“This then will be the shape and the feel of the world: an abandoned shell, signs of old life, curious animals wandering in and out of ruins, the wilderness crowding in, overtaking all human structures and human things.”
— Ben H. Winters, Countdown City (The Last Policeman #2) 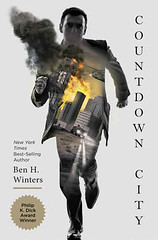 I’ve finished the second installment in Ben Winter’s Last Policeman series, “Countdown City.” Here’s some of what I said after reading the first novel, “The Last Policeman”:

The SF angle [of the Last Policeman novels] is that an asteroid is on a collision course with Earth and will impact in a few months, ending human life on the planet. Meanwhile, life goes on for the citizens of Concord, New Hampshire. Life goes on for Hank Palace, a newly-promoted detective sergeant, in particular. Along with a small subset of the population, he remains dedicated to his job, because what else is there? While others quit work to tick items off their bucket lists, go on benders for the duration, or merely kill themselves rather than face the apocalypse, he perseveres. […]

As a police procedural — Detective Palace slowly unravels a murder everyone else wants to brush off as just another “hanger,” or suicide — it […] meets muster. I thought some of the big revelations that come Detective Palace’s way were too easy, too contrived, and I got a bit impatient with Palace’s habit of mentally kicking himself for not seeing the big picture sooner, but those are minor niggles.

It’s getting closer to the end of the world, and what’s left of society and government is falling apart. Of course Hank Palace sees and tells us about a limited slice of the world, New England and only a bit of that, but we learn of “catastrophe immigrants” making their desperate way to American shores so we can assume things are much worse elsewhere. And they’re pretty damn bad where Palace is.

Palace here, in the second novel, is incredibly stubborn in sticking to his good guy guns, and I find him somewhat unlikable because of that. Pretty sure if he and I were locked in a cell together, I’d have to strangle him in his sleep. And once again, Palace’s logical leaps … here, they turn out to be wrong as often as they are right … sort of defy belief.

But if the world were really about to end and everyone knew exactly when, I think Winters has as good a guess as anyone how it’s likely to go.

At the end of “Countdown City,” Palace realizes his work is not yet done. He has one final quest before him, and I will absolutely read about it in “World of Trouble,” the final book of the trilogy.

“Who gets to be an American? What does an American look like?”
— Charles Yu, Interior Chinatown 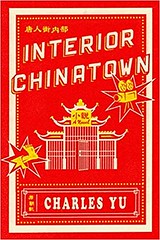 Interestingly done, written as a television screenplay. The beginning, with two or three lines of text on otherwise blank pages, had me thinking I’d mistakenly borrowed a book of poetry. But a more fleshed out story began a few pages in, indeed quite an interesting story, though the mostly blank pages kept popping up throughout, resulting in an uncommonly fast read.

I guess Wu’s story is about alienation with a bit of history thrown in, that history being one of prejudice and discrimination against “Chinamen” in the United States, a well-known black mark in our recent past, with social reverberations continuing today. Well-known to me, at any rate, but still interesting when told from the “Generic Asian Man” POV.

What I didn’t appreciate before reading “Interior Chinatown” is just how much our constant stereotyping of Asian minorities, and the behavioral expectations we bring to the table, affects how Asian-Americans behave and even perceive themselves.

Oh, and the “Black and White” TV show within the show? Can I help it if I mentally renamed it “The Rookie?” 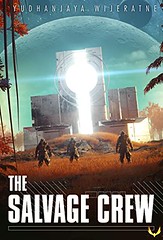 The Salvage Crew
by Yudhanjaya Wijeratne

There’s an obvious comparison here with Martha Well’s Murderbot: Amber Rose, once human, has been digitized and is now an AI. Instead of being implanted in a bot, she is a planetary lander, overseeing and assisting a human crew sent to salvage what can be recovered of a UN colony ship that crashed on an unexplored and distant planet.

As the planet reveals surprise after unpleasant surprise, the AI’s resources are stretched to the limit and beyond, as are those of the human salvage crew, and despite the AI’s innate sense of humor and penchant for poetry (a holdover of its once-human self), things get mighty grim for all involved.

So grim, in fact, that forcing myself to plow through chapter after chapter detailing the salvage mission’s gradual decline and loss of hope quickly became a struggle. I had to force myself to keep reading, knowing some sort of resolution would eventually come. Wijeratne’s story, had he written it with commercial success in mind, would have been tighter and much shorter (in fact it could be reduced to a novelette, like Wells’ first Murderbot stories, without losing any punch at all). But “The Salvage Crew” is serious SF, not written for commercial success, and in the end slogging through all that grimness pays off.

Never fear, I shall not spoil. The stage is set, at the end, for grand adventures ahead and a great follow-on novel. I for one shall keep an eye out for it.