“I was having an emotion, and I hate that.”
— Exit Strategy by Martha Wells 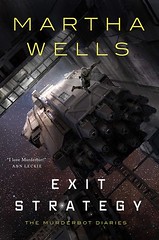 “Exit Strategy” picks up where the previous novella left off, and sees the Murderbot’s return to the humans who befriended and freed him from corporate servitude in the first novella. Which is by way of saying the fourth novella completes the story begun in the first novella, and may originally have been meant to be the end of the Murderbot Diaries (no fear, it isn’t).

“Exit Strategy” is as engaging and busy as the three previous installments, with plenty of action and suspense as the Murderbot evades detection and disassembly at the hands of GrayCris security, rescues his human friends from the same fate, and reaches a safe haven in orbit around their home planet … a place he doesn’t plan to stay long, a jumping off point for the next installment, the novel-length “Network Effect.” 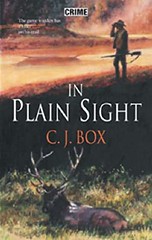 The timeline of the sixth novel, “In Plain Sight,” begins less than a year after Joe Pickett returns from detached duty near Yellowstone National Park, the story line of #5, “Out of Range.” Some marital tensions between Joe and Marybeth, introduced in the previous novel, continue to simmer, but this is a new story with a new cast of characters (pioneering residents in the Saddlestring community but new to us at any rate), plus a cold-blooded killer seeking revenge against Joe Pickett for his involvement in deaths that occurred in previous novels, so there’s plenty of continuity with the past in addition to a tense and violent new story leading to a major development in Pickett’s life, drawing the reader irresistibly to novel #7, “Free Fire.”

These are damn good books. 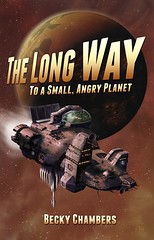 The Long Way to a Small, Angry Planet (Wayfarers #1)
by Becky Chambers

“The Long Way to a Small, Angry Planet” was my book club’s choice for September 2020. I ordered it from the library but there was a long waiting list and it wasn’t available until October. Not having read it in time, I skipped the group’s September discussion. Now that I have read it, I suspect the group regards me as an Artis Corbin, holing up with my algae pots while the rest of the crew gathers for a companionable dinner.

Chocolate and peanut butter, okay, I can get into that, but I’m not sure I like sugar with my science fiction. Okay, I stream the occasional episode of “The Orville,” the TV show I think comes closest to the settings, characters, and spirit of this novel, but I don’t make it a regular thing, and I’d certainly never discuss “The Orville” with friends or re-watch entire seasons again and again, as I do with “The Expanse.”

If I regard “The Long Way to a Small, Angry Planet” as young adult science fiction, I have few objections. It’s a nice story with nice characters, and enough tension (the wormhole tunneling trip to a never-before-visited and potentially hostile system near the galactic core) to keep one turning pages. It’s nice to think mankind might someday encounter alien civilizations, learn to live among them, and even form friendships and personal attachments.

But is it too nice for adult science fiction? That’s a personal thing; obviously there are no rules, so it can’t be said Becky Chambers has broken any. But I prefer my science fiction black … no cream, no sugar. “The Long Way to a Small, Angry Planet” is entirely too sweet for my taste. 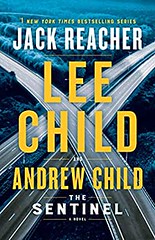 I’ve read every Jack Reacher novel (in order no less) along with Lee Child’s collected JR short stories. This novel is the first to have been co-written by Lee Child and his younger brother Andrew. I could tell the difference.

I read “The Sentinel” on the eve of the USA’s 2020 presidential election. The threat at the center of the novel, that the Russians are planning a massive electronic infiltration of American election systems, presaged by strategic ransomware attacks around the country, could have been taken from Rachel Maddow’s A block on October 29th.

I don’t know that Lee & Andrew are as successful in introducing tension as they are in giving Jack Reacher a timely conspiracy to fight. “The Sentinel” felt tired to me, flat and needlessly convoluted. I finished it because it was a Jack Reacher novel, not because I especially liked it. The elements of a Jack Reacher novel are all here, but they didn’t gel for me. And lordy, did Jack talk so much in the earlier novels? Did the bad guys always wait to hear him out before getting their asses kicked?

Maybe the formula is wearing out. Nevertheless, if Andrew Child takes over the family business and writes a 26th Jack Reacher novel, I’ll read it. If it’s as flat and formulaic at this one, I’ll quit then.

If you’re a diehard Jack Reacher fan, you’ve got to read “The Sentinel.” If you’re new to Reacher, do yourself a favor and grab one of the older novels first. 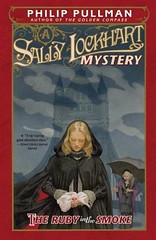 Excited about the new season of “His Dark Materials” coming to HBO, but having recently re-read the titular Pullman trilogy and the first two novels of “The Book of Dust,” I decided to try one of Pullman’s lesser-known (to me at least) young adult novels.

As YA … plucky girl heroine, evil villains, steadfast friends, lots of contrived and unlikely breaks … it’s adequate and deserves three stars. Young readers will like it.

The Pullman YA novels I love speak to adults as well as children. Judging by the first installment, the Sally Lockhart books speak mainly to children and teens. This adult reader will now be content to wait for the third novel of “The Book of Dust.” 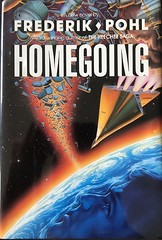 I wrote this before reading “Homegoing”:

Found this in the neighborhood mini-library; will return when done. I read Fredrick Pohl in the 50s and 60s and assumed this was an old one I’d forgotten. Apparently Pohl continued writing well into the 21st century, and this one was written in 1989. I had no idea. Looking forward to recapturing some of the fun I had reading SF as a teenager.

Now that I’ve read “Homegoing,” I can say it really was a return to the YA (though the term didn’t exist then) SF of my youth. And fun, other than the rushed, far-too-easy, happy-happy ending. It was definitely not written for adult SF readers, but I enjoyed it.

Now returning it to the neighborhood book drop; maybe it’ll cheer someone else up. 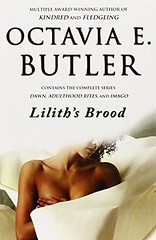 I read “Dawn,” the first of three novels that make up the bound trilogy titled “Lilith’s Brood,” but couldn’t summon the strength to slog through the next two, “Adulthood Rites” and “Imago.”

Worse, the first novel of the “Lilith’s Brood” trilogy, “Dawn,” is exhaustingly drawn out and repetitive. I didn’t need a hundred pages of reawakened humans refusing to believe they’re on a ship to get what Octavia Butler was driving at. Honestly there were times I thought the first novel would never end. When I started on the second and realized it was going to be as repetitive as the first, I decided to abandon the lot. If that makes me a bad SF fan, I plead guilty. “Lilith’s Brood” is just not my kind of SF.