Do the Mashed Potato with Me 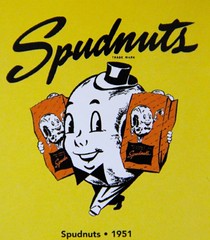 Fresh back from my annual wellness check; looks like I’ll stay this side of the grave a while longer. Actually, I’m healthier than I have any right to be, plus the doctor had the high-dose (i.e., old-folks) flu vaccine our local Walgreens is out of, so that’s taken care of as well.

I was good the whole month of August, avoiding anything sugary or obviously dripping with lard. That, naturally, resulted in cravings, which I indulged with a stop at Dunkin’ Donuts on the way home. Their iced latte’s pretty good, but lordy the donuts suck. Glad I got that out of my system.

Random memory: Spudnuts. There was a shop near our home in Laramie, Wyoming, in the late 1950s. In my memory, they were the best donuts on Earth. The magic ingredient … yes, truly … was mashed potatoes. The chain went out of business decades ago, but some independently-owned shops survive. Sadly there are none around here (the nearest locations are in Los Angeles and Farmington), so I can’t check to see if they’re as good as I remember.

When I walked Mister B earlier this morning there was a rattlesnake in the street in front of our house. We didn’t get close, but it didn’t look right … later, when we returned, I realized it was dead, run over by a neighbor. Not very sporting, that.

Speaking of neighbors, as president of the homeowners’ association, I get the occasional complaint. The latest was an anonymous one about a car on jacks in someone’s driveway, a street over from our own. I sent the offending party a friendly email; he responded and put the wheels back on the car. And that was that … until I walked the dog by his place a few days later and realized the house across the street looked even worse, as if the owners had moved away and left it abandoned. The garage door was open a few inches, weeds were growing in the gravel driveway, and there was a discarded metal shelving unit in the front yard, bent and twisted. It’s been more than a month now and nothing has changed. This time it’s me who’s complaining! I sent a note to the owners this morning: “____ & ____, are you guys home? Asking because I’ve been by and your house seems empty. Just checking in.” So now we wait. 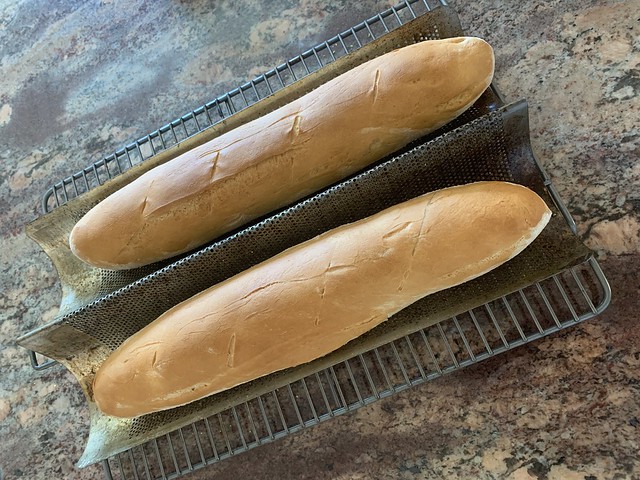 My last two bread machine loaves (regular white bread) didn’t rise properly. Yesterday I fired up the Zojirushi again, this time just on the dough setting, using the same flour and yeast as before. When the dough was done I finished shaping and baking two loaves of French bread by hand. I didn’t get the slashes on top right but the bread was great. Do I have a bread machine issue? Next time I’ll try the dough setting for white bread and finish it by hand to see if it turns out as well as the French bread. Maybe I should add mashed potatoes!

Trying hard not to pay attention to Biden/Trump media hype and horse-race hysteria. Nothing has changed from the previous election, or the one before that, or … well, going back forever. It used to be called selling newspapers; these days it’s called getting clicks, but in the end all they want is your dime, never mind what’s actually going on with voters. We’ll just have to see what happens.

Speaking of media hype and hysteria: 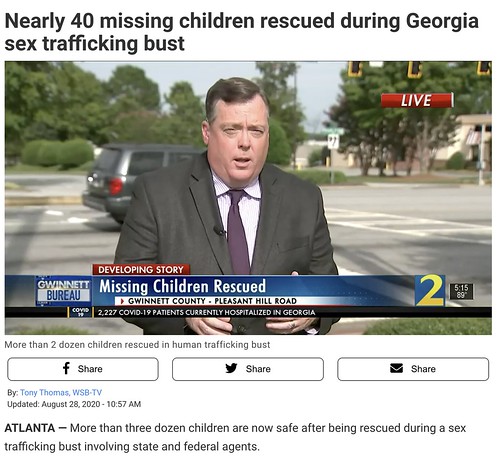 Yeah, actually, it was 78 missing children in an ongoing seven-state operation conducted over weeks. It wasn’t actually a sex trafficking bust. It wasn’t Pizzagate. Hillary Clinton and Tom Hanks weren’t involved. The Storm is not upon us.

More specifically: most of the kids weren’t “rescued”; they were merely “located.” The five or six “trafficked” children turned out to be teenagers who’d been kicked out of their homes for being gay or transgender (a sad and common story) and were trafficking themselves on the street to survive. The rest were teenagers who had run away from foster homes, plus a handful of younger children abducted by non-custodial biological parents. Many were not “missing” at all.

The reporting, by local and even major media outlets, was atrocious, with headlines like “39 Missing Children Located in Georgia Sex Trafficking Sting Operation,” and “Missing Children Rescued in Georgia Sex Trafficking Bust.” As an antidote, here’s a Huffington Post story with details on what really went down, which bears as much resemblance to the headlines as the truth does to a Trump tweet.

The “40 missing children” bullshit is from over a week ago. The media’s still at it, with more recent (like yesterday) scare headlines like “U.S. Marshals rescue 8 missing children in Indiana during ‘Operation Homecoming.'” Click the link and read the article. One of the first phrases you’ll see is “parental kidnapping.” Inbred yokel incest aside, it’s nearly always parental kidnapping.

These misleading headlines are as worrisome as video deepfakes. You click on a headline today and more than half the time the story you want to read’s hidden behind a paywall, or you get a screen telling you to turn your ad-blocking software program off in order to access the story, and most of us just give up at that point. Low-information types (Trump voters and other know-nothings) don’t even click in the first place. What survives in popular memory is the misleading headline.

The media isn’t going to change. Critical thinking skills are more important than ever. If your first thought is “good luck with that,” I’m with you, baby. We’re doomed. Got any donuts?