“As a heartless killing machine, I was a terrible failure.” 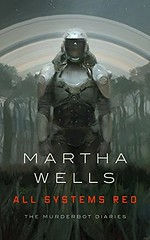 All Systems Red (The Murderbot Diaries #1)
by Martha Wells

I had just placed the novel-length Murderbot book, “Network Effect (The Murderbot Diaries #5)” on hold at the library and decided, since they had it and it was immediately available, to check out “All Systems Red,” the first novella in Martha Wells’ Murderbot series.

I was delighted with this introduction to the Murderbot. I don’t favor novellas, but this one is meaty and fulfilling. There’s a lot of gee-whiz science fiction here, set on an alien planet no less, along with interesting world-building about future human societies. True to the series title, “The Murderbot Diaries,” it’s told on a chatty, personal level by the partially human Murderbot itself, and though it would wince at my praise, Murderbot is a first-rate story-teller. Based on this first read, I expect the overall Murderbot series to be a great, fun read.

I finished “All Systems Red” a couple of hours ago. I’m still on the wait list for “Network Effect.” While I wait, I may as well put in a hold on the second Murderbot novella, “Artificial Condition.” 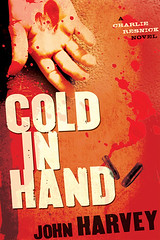 A friend met the author when she lived in England and recommended the series. The Goodreads reviews for Harvey’s first Charlie Resnick novel were mixed so I decided to read a later one. My local library had an e-copy of “Cold in Hand” available for immediate checkout so I downloaded it to my Kindle, not realizing it was the next-to-last Charlie Resnick novel. I probably should have waited for an earlier novel in the series to become available, because there’s an air of finality and closure with this one. In fact, I was surprised to learn there’s one more after this one.

The Charlie Resnick I met in this novel is in his 50s. He has his thirty in and, while his work as a detective inspector is still methodical and thorough, he comes across as a man going through the motions while deciding whether to retire or not. After losing Lynn, the lover he’s lived and worked with in at least one previous novel, likely several, he’s about as down as anyone can be. I liked Charlie and was depressed for him.

That aside, this is an exciting novel. Part police procedural, part inspired detective work based on experience and intuition, with what feels like a realistic depiction of life and crime in contemporary Britain. I enjoyed the action, loved the plotting, was easily able to keep the large cast of characters straight, and want to read more of the series.

It was a mistake on my part to start with the penultimate novel. It reads well as a stand-alone, but it’s going to hard to forget what I know of Charlie and Lynn’s future when I follow their earlier, younger adventures.

“As much as I enjoy reading Lee Childs’ Jack Reacher stories, Jack is a superhero, a figure of fantasy. When Jack Reacher gets even, people die … but not before a righteous ass-kicking. While C.J. Box brings on Reacheresque tension and villainy, when it comes to his human and relatable hero Joe Pickett, it’s more a matter of luck. Joe prevails, a believable form of getting even. But don’t worry. Asses do get kicked, in satisfying ways. I really like this Pickett guy. He makes mistakes, and plenty of them. He worries about money. He trusts people he shouldn’t. He’s a regular Joe. I really like the depictions of Wyoming, a state I lived in as a teenager and remember fondly. Joe, at least in this first novel, has an almost-too-perfect family, but there are tensions, and I sense troubled teenage years ahead for his daughter Sheridan. Granted that everything in this novel is fiction, it feels real and true.”

The fifth novel in the series, “Out of Range,” is a departure from the first four in that the action takes place in and around Jackson Hole, where Joe Pickett has been sent on temporary duty. Momentous events occur there; a mysterious suicide is exposed as a murder; bad men intent on raping the West get their comeuppance (or do they?), and Joe is sorely tempted to violate his marriage bed. Back home in Saddlestring, Marybeth and the girls’ lives are no less fraught, and Marybeth herself feels the urge to stray, which is instantly picked up on by the 13-year-old Sheridan. Meanwhile, a thorn in Joe Pickett’s side is plucked by a friend.

This one was a real potboiler, and I mean that in a good way. It is also, although it seems to be just as long as the others, an exceptionally fast read. I want more! 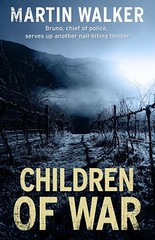 Children of War (Bruno, Chief of Police #7)
by Martin Walker

I picked this up at the neighborhood book drop, replacing it with my copy of Philip Roth’s “The Plot Against America” (still there two months on … I think my neighbors must all be MAGAts).

I enjoyed the characters, the setting, and especially the descriptions of country French meals and their preparation. I wish there was a place like St. Denis I could retire to. And of course that’s where fantasy enters the picture, stretched even further by the notion that a former special forces operative so valuable to the government of France would be allowed to live out his post-military life as police chief of a quiet rural town. Of course the town isnt quiet at all, nor is Bruno left alone. In this novel, he’s the central player in an operation to protect a high-value asset from assassination attempts and bust up an Islamic terrorist recruitment center in Toulouse, assisted by what appears to be France’s version of the British SAS and a female American James Bond, meanwhile unearthing his town’s forgotten history as a refuge for French Jewish children during the Nazi occupation, and nailing a rapist besides. Bruno is one busy small-town cop!

It’s all quite ridiculous, but also quite fun. And did I mention the cooking? I will be back for more Bruno, Chef de Police. 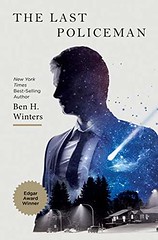 I follow a former CIA agent turned small-town cop on Twitter. His name is Patrick Skinner (@SkinnerPm). I first heard of him when the The New Yorker profiled him in 2018. Skinner posts almost daily about his life as a cop (now a newly-promoted detective). A few weeks ago he asked followers for book recommendations. One recommendation was for Ben Winters’ “The Last Policeman.” Skinner read and loved it. When a working cop endorses a cop book, that means something. I immediately bought a copy.

The science fiction angle is that an asteroid is on a collision course with Earth and will impact in a few months, ending human life on the planet. Meanwhile, life goes on for the citizens of Concord, New Hampshire, and for newly-promoted detective sergeant Hank Palace in particular. Along with a small subset of the population, Palace remains dedicated to his job, because what else is there? While others quit work to tick items off their bucket lists, go on end-times benders, or commit suicide rather than face the apocalypse, he perseveres. I like to think I’d do the same … Hank Palace is a very relatable character for me.

In this novel, Detective Palace slowly unravels a murder everyone else wants to brush off as just another “hanger,” or suicide. As a police procedural it seems realistic, and as I mentioned, if a real-life cop endorses your work, then maybe you got those parts of your story right. I thought some of the big revelations that come Detective Palace’s way are too easy and contrived, and I got a bit impatient with Palace’s habit of mentally kicking himself for not seeing the big picture sooner, but these are minor niggles. Minor, but enough to knock my rating down a notch from the four stars I initially wanted to give the book.

Still, I loved it. It’s atmospheric without the empty echo chamber feel of atmospheric books, if that makes sense. I believed the characters, I believed the story, I believed Ben Winters’ ideas about how ordinary people might react to impending extinction. Will I read the second two books of the trilogy? Yes, I will. 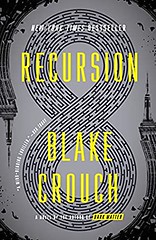 A science fiction novel featuring intentionally-created alternate timelines. “Recursion” pulled me in initially, but toward the end I found myself flipping through pages of internal dialog, looking for the next altered timeline and the characters’ reactions to it, one gloomy failed timeline after another, meanwhile trying to remember what the protagonists were trying to do when they went back to start each new timeline. I could have remembered if I tried; I guess what I’m saying is I quit caring. The second half of the story went on and on. Then it went on and on some more. Congratulations to Barry for finally cracking the code, ending the infinite repetition of failed timelines, and bringing the overlong story to an end.

My inner science fiction nerd wonders about all the inoperative/recorded-over timelines created by Slade, Helena, and later DARPA. The inhabitants of those timelines all continue to suffer endlessly, right? And why is it that the first time Helena went back to the day her parents turned her loose in the family pickup truck, she didn’t find herself in an unrecognizable world where someone from DARPA had gotten there half a century earlier and assassinated Hitler? 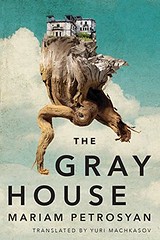 The Gray House
by Mariam Petrosyan

No rating: did not finish.

“The Gray House” was my book club’s fantasy selection for May 2020. Exhausted at the halfway point, I took a break, then never picked it up again. I’ll note that of the 14 members of my book club, only 2 managed to get all the way to the end. This is what I wrote a day after setting the novel aside:

There are definitely some fantastical things going on in the Gray House and with its child inmates, but it’s all rather vague and stays that way: hints and portents, nothing concrete.

It’s a rewarding read while at the same time a frustrating one. The translation feels brilliant; I believe English readers are getting what the Russian author intended, as well as her strong voice, but man do you have to concentrate, and even then things happen that seem like obstacles thrown in your path: kids’ names change, Siamese twins are suddenly in two different places, ghosts really aren’t ghosts at all. Perhaps it was a mistake to glance at the reviews before finishing, because from what others have said issues like these are never resolved.

And it’s hellishly long. I read every evening; sometimes for thirty minutes, sometimes for an hour. My Kindle is set to show percent read. Three nights ago I had reached the 45% mark. Tonight I’m at 48%.

Many reviewers compare “Gray House” to “Lord of the Flies.” Am I alone in wanting to compare it to “South Park”?