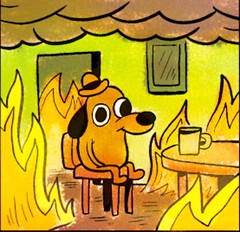 It’s National Pet Fire Safety Day, observed every July 15th since 2009. Did you know that? Now you do. Today’s also National Clean Beauty Day and if that’s not enough of an excuse to drink it’s National Give Something Away Day as well.

You have to get up early to beat the heat in southern Arizona, so when the dogs started stirring at 5:30 I said what the hell and got up with them. The pool sweep was jammed with twigs and mesquite beans from the weekend’s monsoon storm, so I fished it out and cleaned it. I’ve been wanting to clean the motorcycle battery terminals and leads, so I did that, then fired up the air compressor and filled the tires, a PITA of a job because you have to lay prone on the garage floor to get to the rear tire, and with my knees it’s hard to get up again. But I did, and it feels great to get stuff done. Now for some bloggage.

This may seem a trivial use of valuable Paul’s Thing space to you, but something’s been bothering me and it’s my blog, so there. Compare these two images: a Hulu menu screen for the British series Misfits, and a photo of the actual cast. 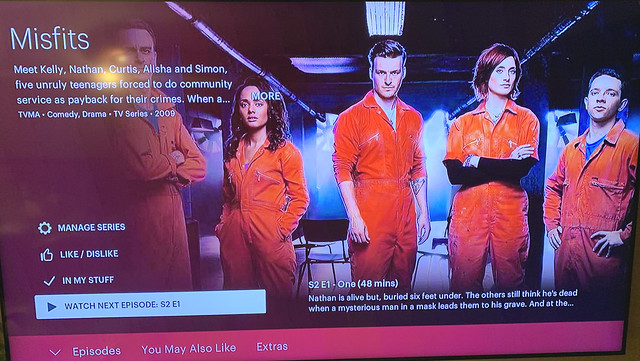 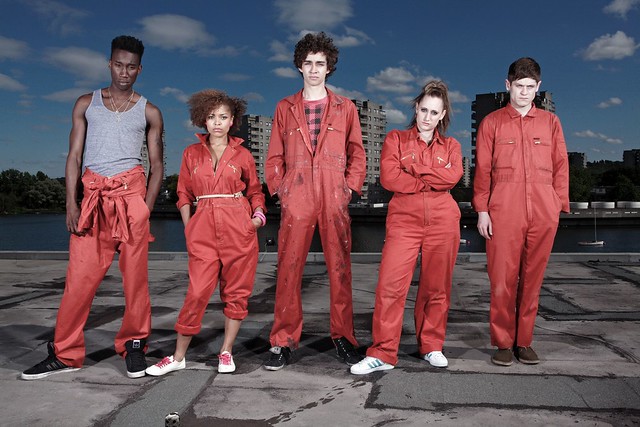 Not even remotely the same, am I right? I’m either witness to a tear in the matrix or they’re rebooting the series with an all-white cast of 30-somethings playing teenagers, which sadly seems the more realistic explanation.

Speaking of TV, like everyone else we’re streaming more. A lot more. As in paying for 1) Xfinity/Comcast cable TV, 2) Netflix, 3) Amazon Prime, 4) Hulu, and 5) Disney+. The Comcast subscription includes HBO & its streaming counterpart, HBO Max (same content as far as we can tell), as well as NBC’s streaming service Peacock. Donna pays extra for an Amazon add-on channel, PBS Living, which has the Julia Child archives. Friends tell us to subscribe to Britbox, Acorn, and Apple TV so as not to miss anything, but good lord the entertainment bill’s encroaching on car payment territory as it is.

Disney+ is our latest add. We signed up in order to watch Hamilton. I listened to the soundtrack on a car trip two years ago and have wanted to see the show ever since. We subscribed to Disney on a month-by-month basis, thinking we’d watch Hamilton and then unsubscribe, but we might stay for The Mandalorian, which isn’t half bad. The first two episodes shamelessly cash in on what made the first Star Wars movies such hits — weird-looking aliens in seedy cantinas, cute droids, baby Yoda, and of course the Jawas and their land crawler — but what’s wrong with that? It’s fun. I tried to get into Altered Carbon on Netflix, which similarly cashes in on Blade Runner, but in such a cheesy, un-fun, ripoff way I gave up on it. And truth, while Blade Runner may have been good dystopian sci fi, no one could call it fun.

Back to Hamilton, though, and our big confession: we got halfway through, took a pause-button intermission, and probably won’t return for the second 90 minutes. There, I said it. Yes, it’s an amazing production and the talent is overwhelming. But there’s a lot of historical whitewashing going on, and the civics lesson it delivers is grade-school stuff.

Went to the hardware store yesterday, then stopped at Safeway on the way home for a frappuccino from the Starbucks kiosk. Happy to say I didn’t see a single person not wearing a mask. The government may be in denial, but most people know what’s up and are acting responsibly. The real test will be next month, when school’s supposed to start.

Arizona “re-opened” in May and I started getting haircuts again. Now the virus is surging, far more so than in March and April when the governor took the lead and shut barbershops down, but this time around he seems to have given up. Wonder what changed? Anyway, I have an appointment in two weeks and was kind of hoping he’d issue another shutdown order, saving me the uncomfortable confrontation of canceling — my barber, you see, is a personal friend and motorcycle riding buddy — but it looks like I’m going to have to be the bad guy and make the call myself.

Not that anyone cares, but I have a suggested name for that football team that’s finally retiring its racist name: The Washington Footie McFootball Faces. Don’t say I never gave you anything, NFL. And hey, it’s not even noon and already I’ve protected our dogs from fire and cleaned my hands and face with a bar of Donna’s beauty soap, ticking off all three national July 15th observances.

Two novels I pre-ordered in 2019 popped up on the Kindle yesterday, David Mitchell’s Utopia Avenue and Mary Robinette Kowal’s The Relentless Moon, so I’m going to spend the afternoon reading. Please stay safe and wear your mask if you have to go out!