Mister B update: he’s not better. But there’s every reason to hope he will be. 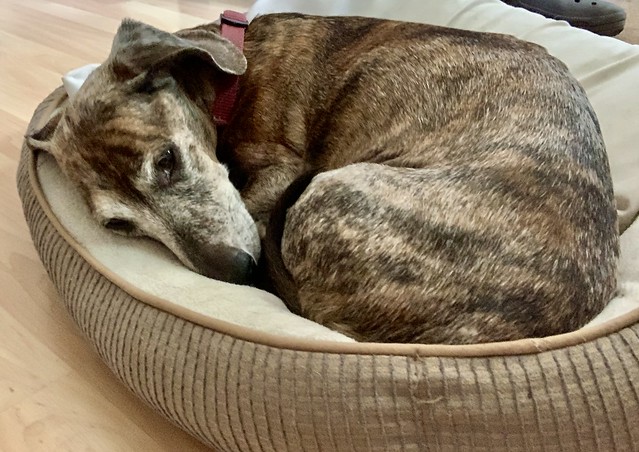 Even though an early valley fever test came back negative, we had him re-tested yesterday at the animal hospital. His symptoms — a dry cough, fever, loss of appetite, listlessness — all point to valley fever. Also pneumonia, which is what they’ve been treating him for, but without any positive result. At this point, though it sounds cruel, we hope it does turn out to be valley fever, because that’ll mean we’ve finally identified what’s wrong and can get him on the right meds.

If the second test comes back negative, the next step is to anesthetize him, do a tracheal wash to get samples from his airways, then test the samples to identify the fungus or bacteria that’s making him sick. That’s a fairly expensive procedure; if valley fever is identified first he won’t have to undergo it. We’re currently waiting on those test results; meanwhile he’s home, resting.

We really hope he’s just feeling shitty and not actually suffering. He definitely isn’t his old self. He follows me from room to room and stays close by my side. We both give him lots of love and encouragement, and he sleeps between us on the bed at night. All we can do now is hope we find out what’s wrong with him so he can get the right treatment.

That’s where we’re at with our man, Mister B. Thank you for keeping him in your thoughts.

Our daughter Polly’s apartment fell through. She had a mid-August move-in date; suddenly she doesn’t. She’s not being forthcoming on what happened. We’re back to square one on getting her (and her two effing cats) out from under our roof. I used to marvel at the number of old coots I worked with at the VA hospital who supported adult children and even grandchildren on their retirement and disability checks. Minus the disability check, I have to face the fact I’m one of them, and have been for the past three years (and other long stretches before that).

I saw a nice photo of Joe & Jill Biden with Major, their German Shepard, and thought how nice it was to see he’s a dog lover. I posted the photo on Facebook. saying “Can’t put my finger on it, but something about this photo suggests the guy’s worth voting for.” Within minutes, my post started drawing comments like these: “He’s braindead and a communist?”; “Vote for somebody that wants working people to pay for non working people … I don’t think so!”

This election’s going to be every bit as toxic as the last one, but I have to hope people of good will don’t get discouraged by the flood of fearmongering and gaslighting coming our way, because really, negativity is all the Republicans have. That’s their whole shot, like always. Just remember which of the two candidates likes dogs, and that’ll guide you through the storm-tossed seas to safe harbor.

One thought on “Friday Updates”