I did a selfish thing Monday and went for a solo ride on back roads to Sonoita, Patagonia, and Nogales, returning home via freeway. Chock to chock, 175 miles, a distance any self-respecting motorcyclist would consider short, but oh how good it felt to get out of the house. And those back roads? I had them all to myself!

I haven’t been riding, worried that if I take the motorcycle out something will happen and force me to seek help from others, risking exposure to the virus. This close to home, though, I can call Donna to come get me if the bike breaks down, then drive back later with the truck and trailer to pick it up. Not that the Goldwing’s ever let me down, or is likely to (I hastily add, superstitiously averse to hurting its feelings).

As you can see, I over-optimistically wore my summer vented jacket, forgetting that the little towns I was headed for are a couple of thousand feet higher … and 10- to 15-degrees cooler … than Tucson. The windscreen did its job, though, and I was comfortable.

Patagonia is a lovely little town. In spite of its artist colony pretensions, one immediately senses the locals are Trumpers; moreover, I have no idea how the place has managed to survive … the mines, and the railroad which served them, closed down in the early 1960s, and fewer than 1,000 people live there today.

Rather than trace my way back on the same roads I took down, I opted for the straight route home via interstate highways. I had a thermos of iced tea in the saddlebag and stopped at the rest area north of Nogales to drink some. This lovely cactus was in bloom there. Spring is always a treat in southern Arizona.

Just adding this next one in case any readers didn’t know that US Interstate 19, which in its present form extends only 101 kilometers from the US/Mexico border town of Nogales to Tucson, has metric markings. Of course the authorities knew better than to put up 120 kph speed limit signs … those all say 75 mph. 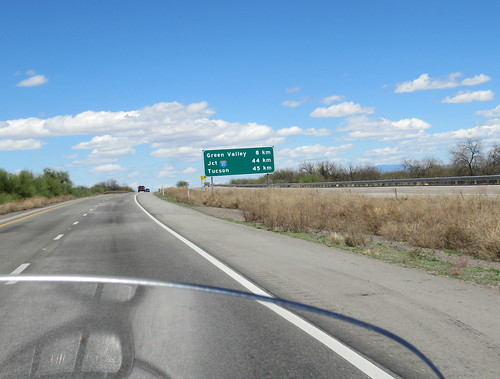 Metric signage on I-19

Well, that was great fun, and I’ll probably be doing more of it. I’d like to get a little closer to the metropolitan area 120 miles to the north to see if the smog has cleared up, as it has over other major cities during these stay-at-home plague times. Which means riding north through Oracle to Globe and on to Apache Junction, from where one can look down into the concrete bowl that is Phoenix.

For now, though, I’m content to stay home, making bread and walking Mister B. Who hates being photographed, as you can see by the stinkeye he’s giving me here. He didn’t much like being on our old bench, for that matter.

We noticed this cactus on our morning constitutional, busy growing new shoots (is that the right word for cactus babies?). It reminded me of the electron microscope coronavirus photos we’ve all been seeing. I don’t know what Mister B thought of it, but he did know better than to pee on it!