It was on or about Saint Patrick’s Day 2007 I gave up alcohol. Is 13 years an unlucky anniversary (as in, is it time for a relapse)? Doesn’t feel like it. I used to kid about buying a bottle of scotch for my 80th birthday (still several years away, thank the gods and Saint Patrick) but every year that seems less likely … I think it’s safe to say I’m in it for the long haul. Assuming, of course, there’s still a haul ahead, and that it’ll be a long one.

Waking up clear-headed and fresh is what I love most about sobriety. Coming to after the night before, gummy-eyed and slow-thinking on a pillow damp with sweat, feeling like I hadn’t slept more than a couple of hours? What’s to miss about that?

I started watching the current season of Better Call Saul on AMC, but the barrage of advertising … commercial breaks coming as often as every five minutes toward the end of each episode, eight or nine or even ten ads per break … was so appalling, so offensive, that I decided to wait a year and catch up when it’s available ad-free on Netflix (where the first four seasons are streaming). I mean why not? Sure, it’s a great show, but what’s the urgency?

But, you say, someone on Twitter or Facebook might (gasp) spoil the new season for me! Bring it, I say. We didn’t get around to watching The Sopranos until a few years ago. Like everyone in the Western world, we already knew how it ended. Who could avoid hearing Sopranos spoilers? It didn’t affect our enjoyment of the show. We would have watched the last episode of Game of Thrones even if you told us Jon Snow would run a shiv through Daenerys Targaryen’s heart, scrooched just as far forward on our seats as if you hadn’t. Seriously, I feel sorry for spoiler whingers. They must never read a book or watch a movie, because someone always blabs. What empty lives they must live.

Donna isn’t into Better Call Saul. She didn’t get into Breaking Bad, so no wonder. We each have our own thing when it comes to streaming TV. She’s into warm family dramas like Heartland and Virgin River. She absolutely loves In Plain Sight, but after season #5 Amazon started charging for new episodes, and she refuses to break down and pay for shows on a service for which we already pay a hefty annual membership fee … and I’m with her on that. What the fuck, Amazon?

Anyway, on a typical night we’ll watch one or two shows we both like (Stumptown, The Rookie, Angel, Scandinavian mysteries with subtitles), then I’ll put on one of hers and read for a while. It works out. I have my own warm family drama, and that’s enough for me.

Broke my stay-indoors-and-out-of-the-sun quarantine yesterday with a motorcycle ride up Mount Lemmon and back. It felt good! 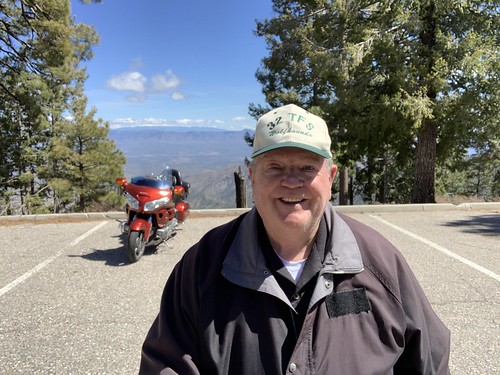 One thought on “Éirinn go Coraintín”