Any Lap in a Storm 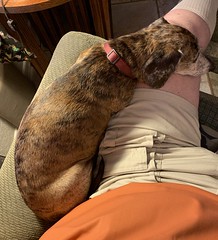 Southern Arizona has a monsoon season. It runs from mid-June to the end of September. This is when the 100-year rains come. We lived in Phoenix during the summer and fall of 1978 and had two of them back to back. Since we’ve been in Tucson, though, 21-plus years now, we’ve had just one or two. For some reason our eastside location doesn’t get as much rain as other parts of the valley, and I remember only a few monsoons that were worth writing home about.

Last week, after Donna flew to California to be with her Uncle George during his last days, we had the first good rain of the 2019 monsoon. It poured, with lightning and thunder all around, so much so that I actually ran back to the home office and unplugged the computers.

Mister B, as you can see, is not a fan of lightning and thunder. He and I hunkered down with a good book. When the worst of it had passed, our swimming pool was full to the brim (how nice not to run up the water bill keeping it full, at least for a while). Of course, it was still coming down at that point. By standing in the rain myself I was able to coax Mister B out from under the patio roof to do his business, but Maxie wasn’t having any of it. Later, when it stopped raining, she went out through the doggie door, pooped on the patio bricks not a foot from the house, then darted back in … I guess she thought it was going to start pouring again any second, and didn’t want to be caught under the open sky when it did.

Donna comes home tomorrow. She left on the 6th, and even though she’ll have been gone for less than two weeks, it already feels like three and she’s not even home yet. But Polly and I are doing well and the house is as tidy as when Donna left.

Donna’s flight gets in at 4:30 PM. As per established Woodford tradition, the dogs and I will get to the airport a few minutes early so we can visit the little park by the cell phone waiting area while Donna deplanes and gets her checked baggage. We’ll meet her curbside when she’s ready and stop on the way home for takeout.

During Donna’s absence I’ve been watching some streaming TV series she doesn’t like. I watch them when she’s here, too, but only after she goes to bed (and by then I’m generally tired myself, so I don’t watch nearly as many of my shows as I do when she’s away). Your mileage may vary, but I started rewatching season one of The Man in the High Castle on Amazon, and it’s really rewarding. I’m seeing so much more the second time around, and making all kinds of connections. I’m a little bewildered by the science-fiction series Another Life on Netflix, which is all over the place and seems to be a mix of every space opera ever filmed, but I have to say that apart from the very silly episode #5, it’s holding my interest. One that totally surprised me is Amazon’s The Boys. It’s purportedly about superheros, a subject that normally repels me, but it’s really about corporate power and corruption, and the more I get into it the more enthusiastic I become. This is some heavy shit, with lots of surprises to keep you on the edge of your seat.

Once Donna’s home I hope we can get our kitchen remodeling project moving. Life’s going to be miserable here while it’s going on, but the sooner we can get started the better. I’m hoping the new kitchen will be in and operational by Thanksgiving. What’s being done? Well, per Donna’s plan, raising the drop ceiling a foot or so, new cabinets and countertops, a new island with a built-in range top, and altering the wall between the kitchen and living room to make it a waist-high partition. I don’t have the clearest picture of Donna’s kitchen vision, but I trust she does and that it’ll be just what this old house needs.

Then, if there’s any money left in the bank, I want to buy a motorcycle lift table, similar to the one in my friend Ed’s garage. 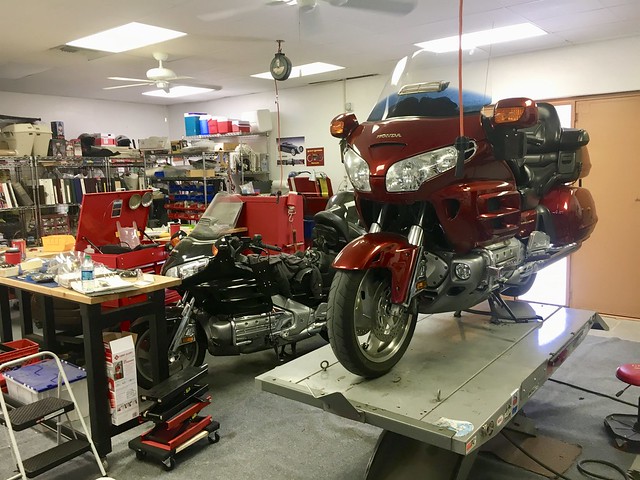 The lift table (this is the one I have in mind) runs a little over 1,200 bucks, and I’ll probably have to buy a stronger air compressor to power it, but tell you what, being able to bring the bike up to where I can work on it without having to lay down on the garage floor will be worth every penny. With my knees, getting down on the floor and back up again is a major accomplishment, and the reason I don’t kneel in solidarity with victims of racism and police brutality during the playing of the national anthem … I’d never be able to get back up again.

I want to mention something new I spotted in the restoration area at Pima Air and Space Museum this Monday. 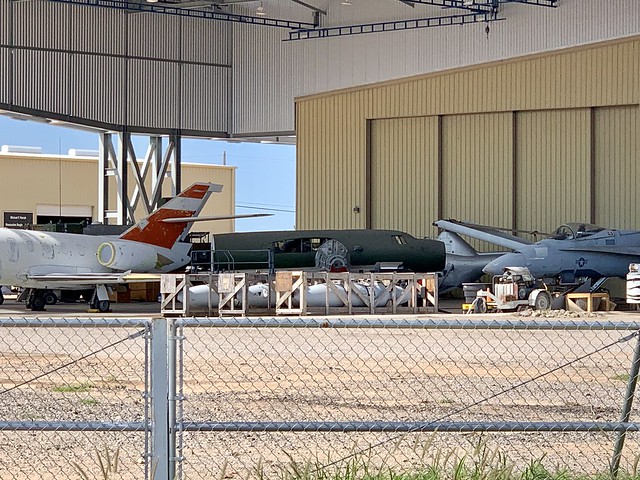 The photo shows a few restoration projects under the sun shade in front of the main restoration hangar. Three have been there for a few weeks now: a Coast Guard Dassault Guardian, an old Sikorsky Dragonfly helicopter, and a Marine Corps or Navy F/A-18 Hornet. What’s new is the olive drab fuselage in the middle. It’s an Army Air Force Martin B-26 Marauder, a medium bomber from WWII.

In all my life I’ve seen only one other Marauder, the one at the USAF Museum at Wright-Patterson Field in Dayton, Ohio. Nearly all were scrapped at the end of the war and today just three are on display: one in France and two in the USA. Wikipedia says there’s a single flying example at Fantasy of Flight in Polk City, Florida, and three more currently being restored at US museums (including my museum’s example). Seven remain of the 5,288 built.

So I guess what I’m saying is this is one warbird you don’t see every day. Now that I’ve looked into it, I believe PASM has had this B-26 for some years, sitting in a storage building in the back lot. There’s a photo of the same fuselage section on PASM’s website (you have to scroll down past a couple of other Martin aircraft to see it). It doesn’t look like work has actually started on the Marauder, but the mere fact that the fuselage is now parked in front of the main resto hangar indicates it’ll start soon. I, for one, can’t wait to see it finally on display.