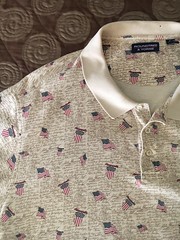 My 20-year-old flag shirt is starting to disintegrate and I haven’t been able to find a replacement. Oh, there are lots of flag shirts out there, but they’re of the garish in-your-face, USA-love-it-or-leave-it, these-colors-don’t-run variety, the kind NRA gun-humpers wear to Walmart, all flag and barely any shirt. I want something subtle. Something like … or exactly like … my beloved old shirt.

You don’t need to hector me about the Flag Code. I know the flag should never be worn as clothing. I learned that way back in Cub Scouts. There’s a line you shouldn’t cross, but I don’t believe this shirt, with its small flag motif, crosses it.

As a patriotic American, living and working in America, speaking American English, a voting citizen who drives around in a big American pickup truck with Arizona plates, I never felt the need to remind my countrymen I’m one of them. I don’t put flag decals on my cars, and the only time I fly the flag from the front porch is on Flag Day and the 4th of July.

Speaking of the 4th, this is the shirt I’ve been wearing to our neighborhood parade and potluck brunch for two decades. I’d like to replace it before this year’s parade, less than a month away. I’ve tried Amazon. I ran a search for “patriotic men’s shirts” on Google. So far I haven’t been able to find anything that doesn’t cross my Flag Code red line. Can anyone steer me to a source? The comments section is open!

Our cool spring lasted longer than normal, but it’s gone now and the brutal southern Arizona summer has begun. Over the past few months I’d gotten into the morning routine of enjoying a cup of coffee while checking email and looking in on Facebook and Twitter, not walking Mister B until eight or eight-thirty. That schedule is no longer operative: the pavement’s too hot by then. Coffee and connectivity will have to wait. This morning Mister B and I were out the door by seven. He isn’t sure he likes the change. Neither am I, but we’ll adjust. We’d better, because that’s how it’s going to be from now to October. 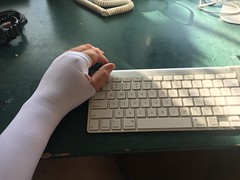 Since 1997, a succession of dermatologists have cut at least 20 basal-cell and squamous-cell skin cancers off my face, head, and neck (I stopped keeping track when fresh scars began to cover old ones and I could no longer accurately count them). The damage was probably done in my ignorant youth, and new skin cancers will appear no matter what I do now, but even so I take preventive steps. I put strong sunblock on my face on days I work and play outdoors. I wear sun-blocking hats, and a full-face helmet with a UV-blocking visor when I ride the motorcycle. At least on the motorcycle, I always cover my arms, no matter how hot it gets.

My air museum uniform shirts have short sleeves, though, and when I’m there every Monday, driving visitors around in an open-sided tram, my arms take a beating. Knock on wood, I’ve never had a melanoma, but something tells me my arms are prime territory for one.

Last week I ordered a pair of handsome SPF 50 slip-on sleeves. They came a couple of days ago, and I wore them to the museum yesterday. As you can see in the photo, they have thumbholes so you can roll them down over the backs of your hands. That detail makes them look like something you’d see in a hospital ward, or one of those old science fiction movies about invisible men. I felt foolish wearing them but if anyone noticed they didn’t say anything or stare, so I guess this is my new outdoor look.

Donna and I enjoyed the first four seasons on “Luther,” which we streamed on Amazon. The fifth season just started, but it can only be watched on the cable network BBC America, which, to my horror, has ads! We weren’t even five minutes into the first episode when up popped a long commercial break, crammed with ad after ad, and I realized I’ve grown so used to streaming shows on Amazon, Netflix, and Hulu that I’ve become totally spoiled, spoiled to the extent that commercial breaks can ruin even a good show like “Luther.”

Part of my problem is a snobbish notion that anything associated with the BBC (or PBS) should be commercial-free. If “Luther” aired on NBC or any of the big American networks, the ads wouldn’t have surprised me and I might have been able to overlook them. I didn’t know it before but do now: BBC America ain’t the BBC. It’s just a crappy American cable network airing BBC content … with ads. Well, fuck that. I’ll wait a year or two until season #5 makes it to Amazon, and watch it then.

Speaking of snobbish notions, I’m reading Neal Stephenson’s new novel “Fall, or Dodge in Hell.” I’ve gotten to a section where he describes an America that has self-segregated along educated versus uneducated lines. Four college students on a cross-country drive have entered a heartland backwater they call “Ameristan,” where people base their beliefs on (and get all their news from) social media hate memes (educated Americans, having realized the harm social media had unleashed on society, turned their backs on it years ago, but the rubes and deplorables continued to cling to what they know). I’m not doing it justice, but if you’ve ever tried to reason with a chemtrailian, anti-vaxxer, or QAnon believer, you know the split not only exists, but is hardening day by day.

Ameristan, where you’re not a patriot unless you’re constantly trying to one-up all the other patriots. Where the only good shirt is a flag shirt.

One thought on “Here Comes the Sun”