So yesterday, Donald Trump finally gave us a glimpse of the paint schemes he’s considering for new Air Force One aircraft. 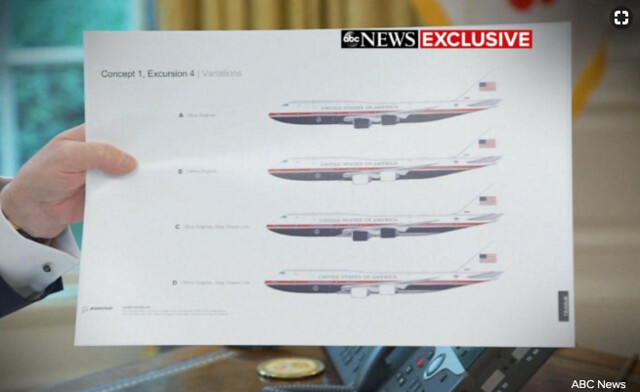 I was prepared to hate anything he came up with, but I have to say these designs aren’t bad. I mean, given Trump’s garish notions of what constitutes good taste, he might have decided to follow a previous president’s lead: 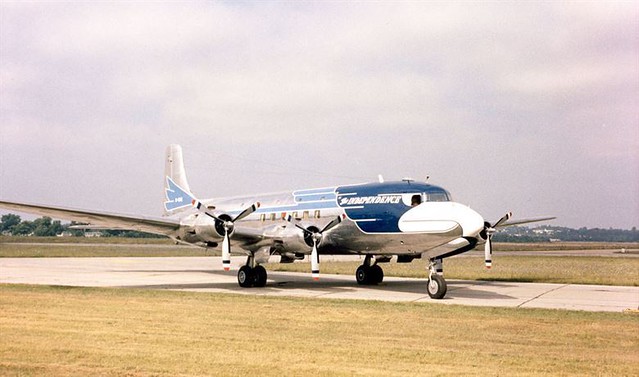 Yes, that’s Harry Truman’s old ride, The Independence. Admit it, you wouldn’t have put it past Trump to come up with something like that, now, would you? I know a lot of us feared he was up to something even worse: 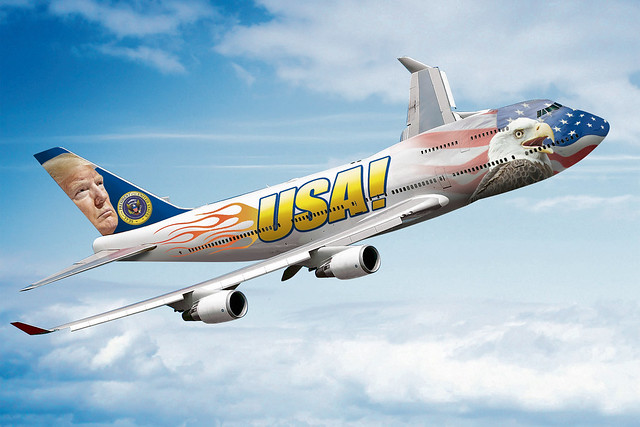 Actually, I’m sorry I posted that image. Don’t want to give him any ideas.

Every Monday at Pima Air and Space Museum, I stop my tram in front of an airplane formerly used by two presidents and their families, the Kennedys and the Johnsons, and explain how we got to the Air Force One livery we all know today.

Here’s the short version of the story: prior to the Kennedys there was no standard paint scheme for presidential aircraft. Roosevelt’s Sacred Cow was polished aluminum, as were Eisenhower’s Columbines. Truman’s Independence was a one-off. The first jets added to the presidential fleet in 1959 were white with red noses and tails. The VC-118 in the left photo, above, was silver and white when Kennedy took office and began using it as an Air Force One. The one thing early presidential aircraft had in common was prominent “U.S. Air Force” lettering above the cabin windows.

The Kennedys moved into the White House in January 1961. The first designated Air Force One jet (SAM 26000, the famous plane we all think of as the “Kennedy Jet”) was going to be delivered in October 1962. That gave JFK and Jackie almost two years to plan what it was going to look like. They hired a French-American industrial designer, Raymond Loewy, to help them with the design. Loewy was primarily responsible for the famous two-tone blue and white paint scheme, but JFK and Jackie worked with him every step of the way, and the current livery (seen in the photos above) still bears their touches: the gold stripe down the side was Jackie’s (as was the interior design of the Kennedy Jet); the switch from “U.S. Air Force” to “United States of America” was JFK’s (he even picked the typeface, similar to that used on the Declaration of Independence).

The Kennedy Jet was delivered on schedule in October 1962. The old silver & white VC-118 currently on display at my museum was repainted with the new design, and every Air Force One aircraft since has worn it. If you want to read a more detailed version of this story, click here.

I know I’m supposed to oppose Trump’s redesign, and until I saw the sketches he unveiled yesterday I did. Partly out of fear he’d insist on something tasteless, partly out of general opposition to everything Trump does and is likely to do, partly because Trump has repeatedly described the blue of the current Air Force One livery as a “Jackie Kennedy color” … and, indeed, partly out of my personal respect for the legacy left us by our one true royal family, the Kennedys.

Trump’s motives may be entirely partisan, but nothing stays the same, and it isn’t written down anywhere that Air Force One can’t have a new look. Each of the four new designs he showed yesterday is conservative, understated, and dignified … the exact virtues of the Kennedy design I talk up to museum visitors. Like the Kennedy design, these new designs include the presidential seal, “United States of America” lettering, and the American flag on the tail. It’s hard to tell from a fuzzy television screen grab, but there might even be a gold stripe between the blue belly and the red running down the middle.

And honestly, who can argue with red, white, and blue?

Update (6/20/19): Today Voice of America White House Bureau Chief Steve Herman was able to take a photo of a model in the Oval Office and post it to Twitter. The model has a gold stripe between the blue belly and the red stripe running down the fuselage. I thought I’d seen it in the earlier, fuzzier image shown on TV, and now I see it’s definitely there. Maybe a part of Jackie’s Air Force One legacy will live on after all. 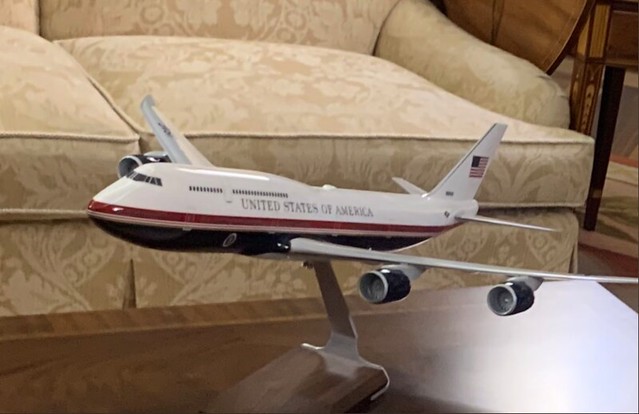