Everyone has to start somewhere. Do you remember your first airplane ride?

Travel by air, at least in the USA, is now so common that as of 2015, 81% of Americans have flown, with Europeans close behind (worldwide, though, the numbers are far smaller: Boeing’s CEO claims fewer than 20% of the world’s population has ever been on an airplane).

I don’t know the numbers (or if they even exist), but I’m willing to bet that in the mid-1950s, fewer than 10% of Americans or Europeans had ever flown. That’s when I had my first airplane ride. It was a big deal, a true rite of passage, an experience I remember vividly more than 60 years on.

My father was a sailor in WWII. I was born in 1946, when he was out and going to college on the GI Bill. Dad put on a uniform again in 1951 or ’52, this time as an Air Force officer. I don’t know for sure (and he’s no longer around to ask), but I think he’d flown on military aircraft during and after the war. In 1955, when I was nine, Dad was transferred from Scott Air Force Base in Illinois to Ramstein Air Base in Germany. The flight over may have been old hat to him, but it would be a first for my mother, myself, and my three younger sisters.

Boys of my generation* were raised on stories of aviation heroes like Chuck Yeager, Jimmy Doolittle, and Charles Lindbergh (our parents knew about Lindbergh’s embrace of Nazism leading up to the war, but they didn’t talk about it and it certainly wasn’t taught in school). No exception, I was beside myself with excitement and anticipation over our upcoming flight. I thought the day, like Christmas, would never come. Come it did, though (I remember Dad telling me we arrived in Germany right after the American occupation ended, which was in May of 1955, so our flight was probably a month or so later).

We traveled by train from Saint Louis to New York City. After spending the night in a hotel with other military families on overseas orders, we took a taxi to Idlewild Airport, where we boarded a Seaboard & Western Super Constellation for the flight to Rhein-Main Air Base in Frankfurt, Germany.

Boarding, I was hit with the smell of the Connie’s cabin. Unlike the cars, trains, and buses I’d ridden in, the Connie smelled clean, with a slight chemical overlay, probably from the fabric on the seats (to this day the smell of the cabin is the first thing I notice on boarding an airliner). Being the oldest child, and the only son to boot, I naturally got a window seat. What a thrill it was when those engines started … you could feel them turning over, one by one, and the rumble bleeding into the cabin was sensory magic. And takeoff? I couldn’t believe how loud those four engines were at full throttle. I stayed glued to the window from liftoff to cruising altitude, and pretty much for the rest of the flight. Halfway over, stewardesses rounded up all the kids and took us up to the cockpit, where I thought I’d died and woken up in heaven.

Our flight took off in daylight but we quickly flew into darkness, and I was fascinated by the blue flames coming from the engines’ exhaust. After the Connie’s cockpit, those flames were the coolest thing I’d ever seen, and I doubt I slept a wink.

The piston-engined airliners of the era didn’t have the range to fly nonstop between the East Coast and England or Europe and had to make refueling stops along the way. Our flight landed and refueled at Gander, Newfoundland, then at Shannon, Ireland. Intermediate stops included, the flight lasted nearly 18 hours. I can’t find a map of the old air route between NYC and Rhein-Main, but this Air France map from 1947 comes pretty close, and shows the transatlantic stops at Gander and Shannon: 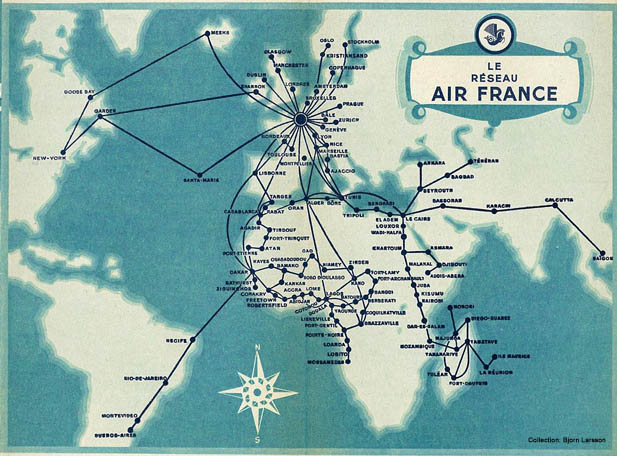 An 18-hour flight with intermediate refueling stops would be considered a grueling ordeal today.** To the nine-year-old me, it was a magic carpet ride. Did I know I was flying in the Golden Age of air travel? Of course not. Even the cramped seats of today would have seemed huge to me then, and the dinner and breakfast those glamorous stewardesses served were the best meals I’d ever eaten. Not to get all Titanic on you, I felt like the king of the world.

Without much effort, I can recall the constant roar and vibration of those engines and their big three-bladed props. I thought it was cool then. It would drive me crazy now. We didn’t fly that high, either. Today, jetliners cruise above all but the tallest anvil heads, up in the 30,000- to 40,000-foot range, but the piston-engined airliners of the 1950s rarely flew above 20,000 feet, where there’s still plenty of weather and turbulence. I didn’t get airsick but my sisters did, along with many of our fellow passengers. Barf bags may stay hidden in seat-back pockets for months or even years today. Not back then!

Full disclosure: when we flew home three years later, I puked continuously across six time zones (it was the only time I’ve ever been airsick, and as with the first flight another unforgettable, though ghastly, experience). That flight, too, was on a Super Connie, and followed the same route in reverse. I don’t remember the airline, but it, like Seaboard & Western, was probably one of the lesser-known carriers chartered by the government to transport military personnel and their families to and from overseas assignments.

Military families like ours, traveling on government orders, must have made up a significant portion of the flying public in the 1950s. Seaboard & Western flew a lot of us in those days, but how many people remember S&W today? The company started in 1946, carrying cargo with former military C-54s. By the time of our 1955 flight to Germany, it was operating a fleet of passenger- and freight-configured Super Connies. From 1961 to 1980 it operated as Seaboard World, continuing to conduct charter freight and passenger flights for the government. In 1980 it merged with Flying Tiger Line, another international carrier doing a lot of government charter work, and lost its corporate identity. Flying Tiger itself was swallowed by Federal Express in 1988. Follow this link if you’d like to read more about Seaboard & Western’s history.

*I mentioned boys of my generation and our fascination with flight. This morning I asked my wife, a first-year Baby Boomer like me, if she remembered the first time she flew. “Not really,” she said. I’d chalk this up to cultural gender differences, but not all boys were raised with their heads in the sky either, and flying (as hard as it is for me to imagine) may not be the most important thing in their lives. Still, I bet a lot of us, of both sexes and of all ages, remember our first flights. I hope you’ll share your own stories in the comments.

**I have to mention a more recent 18-hour plus flight with intermediate stops, because a few still operate in this day and age. In 1989, then an Air Force officer myself, I was posted to Kadena Air Base in Okinawa, Japan. I flew from San Francisco to Honolulu on a Northwest Orient DC-10, then from Honolulu to Guam on a Continental DC-10. After a short layover in Guam I boarded what must have been the oldest surviving Boeing 727 for the Continental Air Micronesia flight to Naha Airport on Okinawa, with an intermediate refueling stop at a small island near Truk Lagoon. We boarded the 727 via the aft air stair and sat in the back of the cabin, which held a few rows of seats. The forward part of the cabin was configured for freight and separated from the seating area with wire mesh. The cargo up front, which we could see, smell, and hear, included crates of live pigs and chickens (that was cool with me, though, because I had my daughter’s parrot Skipper in a small cat carrier under my seat). Flying was old hat to me by then, but that flight … especially the last two legs with the islanders’ livestock … is another cherished memory, and my only regret is that I wasn’t able to share it with my wife and children, who came over two months later on a Flying Tiger 747 via a more direct route.