Erin Go Get a Job 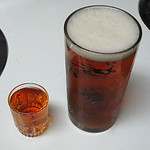 I quit drinking 12 years ago this month. I wasn’t sure how long I’d stay on the wagon, so I didn’t mark the calendar. Anyway, whatever the exact date, I’m at or near the 12-year mark. An even dozen. Half a score plus two. If sobriety is a child, mine is finishing 6th grade. If sobriety’s a marriage, mine is giving its spouse silk & linen.

I don’t miss drinking, not even a little. I love waking up clear-headed and feeling good. The three best things I’ve done for my physical and mental well-being have been, in order, marrying Donna (53 years ago), quitting smoking (40 years ago), and quitting drinking (12 years ago.) Did I mention I’ve been sober for 12 years?

Tobacco’s an actual physical addiction, and quitting smoking remains the hardest single thing I’ve ever done. Christ, I still miss it. When I quit drinking, I feared that too would be hard. To my surprise, it wasn’t. I didn’t experience withdrawal, and by the third month the temptation to drink was gone. I spent a good part of my life partying and drinking with fighter pilots and even harder-drinking Hash House Harriers. Chronic, lifetime alcoholics? I know hundreds of them. Every one of them has tried to quit, and most of them have failed. I know I was and am one of them, and can’t explain why it was so easy for me. Somehow I dodged the alcohol addiction bullet. Lucky me.

The more I see and hear of Congresswoman Alexandria Ocasio-Cortez, the more I like her. She’s a breath of fresh air. I was really struck by a tweet she posted last week: 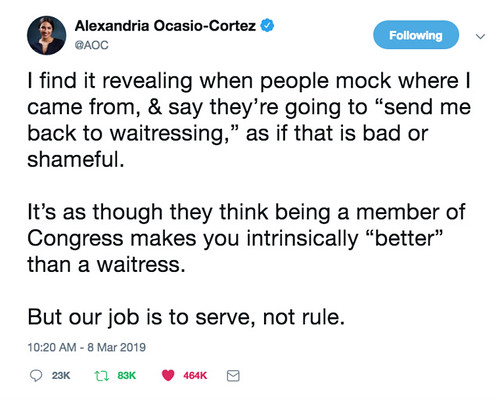 She’s right. Most of us understand that the representatives and senators we elect work for us, and not the other way around, but our understanding is academic and when it comes down to it we bow and scrape as if they are our betters. We need people like AOC to remind us they’re not, and that they’re there to serve us. Of course in real life most of them serve other masters, the ones that line their pockets … I hope AOC and the other new faces on Capitol Hill can resist the lobbyists and keep their independence.

Her point about the dignity of work resonates with me as well. I was a commissioned officer in the US Air Force and flew jet trainers and fighters. I had a second career as a defense contractor, training USAF fighter pilots. I’m not puffing myself up when I say the work was glamorous and rewarding. Later, though, I did work most people would consider menial, several steps down from what I’d done before. Driving school buses. Delivering RVs to wealthy customers. Transporting disabled patients for the VA. And I was okay with that.

Because it was honest work, just as important as what I did before. I tried to take as much pride in those jobs as I did in flying fast movers and training pilots. The experience taught me to never look down on people who work in the service industry. If you’re doing something people need, it’s not menial or beneath you. Don’t disparage honest work.

I’m going to go right on disparaging elected officials who’ve forgotten who they work for, though.

A couple of days ago Trump was in Alabama, signing bibles. That struck a lot of observers as sacrilegious, and probably it was, but not to the evangelicals who lined up to get his autograph, some of whom say he’s been sent by god to make America white again or whatever. But anyway, some of the bibles he squiggled on were military challenge editions. That’s a new thing to many people, at least from what I see on social media. Here’s an example from Facebook: 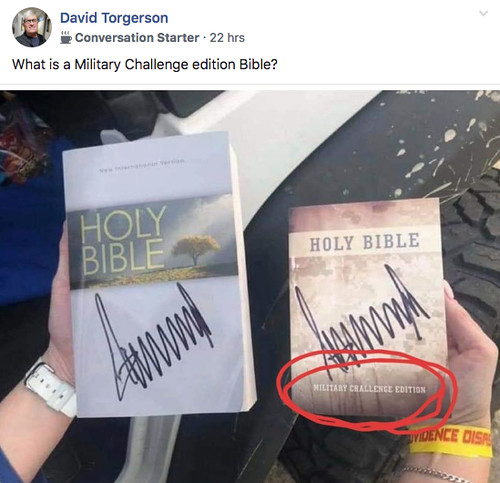 One commenter suggested the bible on the right is “a special edition with supplemental material relating passages to military service.” Another observed that it’s sized “to fit in the pockets of military uniforms.” Another described it as a “free (propaganda filled) version you can get if you are in the military.” Here’s one I liked: “At various points it challenges you to live up to the military actions of Biblical characters. Like King David going out and collecting 200 foreskins in the book of Solomon.” My absolute favorite, though, was this: “Trump’s words are printed in red.”

But here’s the deal. In the military, challenge coins and emblems are objects given to members of certain units, often elite ones. If you’re given one, you’re expected to carry it on your person for the remainder of your military career and be able to produce it when challenged by a former or current member. Someone walks up to you and whips one out, you’re supposed to whip yours out in return. If you lost it or left it at home on the dresser, you buy the bar. That’s the challenge.

I carried several unit coins and emblems over the course of my career. I know exactly where my US Special Operations Command coin is, in case some snake-eater drops by the house: it’s in the drawer with the cufflinks and tie tacks.

In real life few of us continued to carry challenge coins once we left the units that gave them out, but we were proud to have them. I never heard anyone complain they felt pressured to carry one. A bible, though? You know damn well there’s pressure involved, particularly with the inroads evangelicals have made in today’s military. In my day no one gave a shit I was an atheist. No one ever so much as hinted that church attendance might advance my career (well, maybe a little toward the end, but I never took it seriously). But today? I don’t know.

All I can is I hope Mickey Weinstein and the Military Religious Freedom Foundation are on the case.