Our auxiliary dachshund, Maxie, was attacked by a bird of prey! And she has the scars to prove it!

Two nights ago, as Maxie settled in to her spot on the dog couch, Donna noticed fur sticking up on her rump. Looking closer, we saw missing hair, crusted blood, and wounds on the skin underneath, some fairly deep. We cleaned her up as best we could, and Donna took Maxie to see our friend Mary Anne, who used to work for a vet. They shaved around her wounds and Mary Anne said it looked like a hawk or an owl had tried to fly off with her. In the morning, with better light, we could clearly see the mark of a big talon on her butt. Here she is the night of the attack, and again the next morning.

It’s a good thing Maxie’s overweight. She probably owes her life to that. She seems to be healing up well, and carries on as if nothing had happened. I’m happy to say she still goes outside to pee and poop … we were dreading having to train her to use a litter box indoors.

On to less-stressful doggo news: a couple of weeks ago I posted a photo of Mister B to Instagram. We were out on a walk, and he was on his leash. 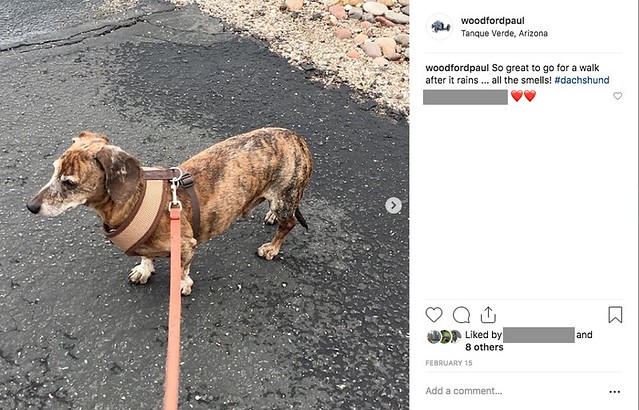 Later that day I had a new follower, a guy from Norway who posts photos of his dachshund, Reinert.

First thing I noticed was the leash. Looking at the Norwegian’s account I saw Reinert was on a leash in every photo. So I looked back at my Instagram photos of Mister B. Yes, he’s always on a leash as well. Since we have that in common, I followed the guy from Norway back.

He must spend every waking moment walking with Reinert, because he posts three to four photos of him daily. I can’t hope to keep up with that, but carrying my iPhone and taking photos of Mister B is now part of our daily walk ritual.

By the way, notice the Norwegian’s hashtags? I guess, as my comment spammers keep telling me, I have a lot to learn about search engine optimization. I usually just settle for #dachshund, but I’m starting to use another one as well: #Mister_B. Youthful fans of Anthony Broughton are going to be so confused!

Social media, forsooth. Tell you what, I’m getting far more out of Instagram and Twitter these days than Facebook, which … with the exception of a few friends who still take the time to write actual newsy posts … features little more than lowest common denominator copy & paste crap.

My barber was watching Michael Cohen’s testimony to the House Oversight Committee this morning, so there was no way I could miss it. The part I saw was dominated by Republican congressmen grandstanding on Cohen’s past crimes and general sleaziness, painting him as a liar and non-credible witness. Cohen calmly responded to each of these attacks, pointing out that he’s already confessed to those crimes and is in fact going to prison for them, and is telling the truth now out of remorse.

My barber and I agreed: you’re not going to find any witnesses from Trump’s inner (or even outer) circle who aren’t sleazebags, who weren’t part of one coverup or another, who aren’t themselves guilty of crimes. I don’t know about the remorse part (revenge seems far more likely), but I believe Cohen’s telling the truth now. What he’s saying certainly fits with everything else we’ve learned about Trump and the people around him.

The 30 minutes of testimony I watched at the barbershop is enough for me, and I don’t plan to watch any more of it. In fact I think I’ll skip Rachel Maddow and the other MSNBC pundits tonight, because they’re just going to rehash what Cohen’s saying this morning.

No matter how damning Cohen’s testimony, it isn’t going to result in Trump’s impeachment and ouster. That just isn’t going to happen. When Trump said he could shoot a man on 5th Avenue and get away with it he wasn’t kidding. And I gave up on Robert Mueller a long time ago … he isn’t going to uncover anything much worse than Mr. Cohen has already revealed. I’ve been saying since November 2017 I don’t expect Mueller to indict Trump, based on the fact that Mueller comes from the same FBI leadership cabal as the two-faced James Comey who, never mind anything he’s said or testified to since, deliberately torpedoed Hillary Clinton just a few days before the election.

Not everyone will get the title of this post. It’s from a childhood memory of Blackhawk comics, a series about an elite unit of fighter pilots doing battle with evil around the world. Hawk-a-a-a! was their battle cry.