The Thing About the Thing

I rode to Willcox, Arizona and back on Sunday with my friend and motorcycle maintenance guru Ed. I ask you, how could I resist stopping for a quick photo op at the namesake of my own blog? It appears the infamous old roadside attraction has been improved by the addition of fireworks, dinosaurs, and space aliens! Some day when I’m out riding on my own, I’ll have to go inside, pay the price of admission, and see the revamped display. 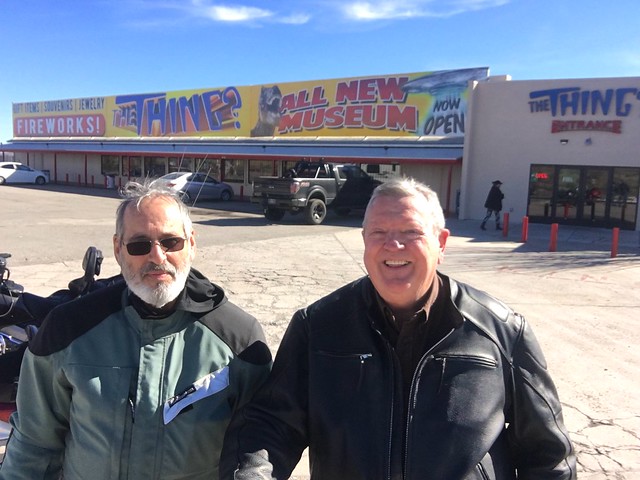 I posted this photo on Instagram, where a representative of The Thing? commented, saying he hoped we had a good time there. I answered, saying we did indeed. No reason to tell him we only stayed a minute, just long enough to take a selfie in the parking lot.

Out of pride, I almost told him The Thing? inspired the name and design of my blog, but then thought better of it. Why invite a cease & desist letter?

In 2004, when I decided to name my new blog “Paul’s Thing,” I Googled it and discovered two previously-existing sites with the same name. Both were personal blogs, and both were inactive: one was just a blank page with Paul’s Thing at the top; the other had a single post dated sometime in 1999. Neither had a copyright notice, so I took the name (after all, I did think of it by myself, before I knew about the older blogs). I Googled it again this morning: the old blogs are gone and this is now the only Paul’s Thing on the internet. Here, you can see for yourself.

I’m still waiting for the more famous Paul Woodford, a British motorsports promoter and YouTube personality, to come after me for my Twitter handle, which is @paulwoodford. I joined Twitter a year before he did, so the handle’s mine by seniority—he had to settle for @paulwoodford84. Even though, as a courtesy to him, I later changed my display name from “Paul Woodford” to “Rogue Lead,” the other Paul Woodford’s fans tweet me all the time, thinking I’m him. I used to forward their tweets to him, but it got to be too much and I eventually quit. I assume he knows who I am; I certainly know who he is!

Just for grins, here’s my very first Paul’s Thing post, from January 23, 2004. It’s about motorcycling (what a surprise), and refers to a South Dakota politician (now dead) who killed a motorcyclist, a pretty famous case in motorcycling circles at the time:

… seems about right to me.

Riders on the motorcycling e-mail lists I monitor are seething with indignation over Mr. Janklow and what they perceive as a slap-on-the-hand sentence for second-degree manslaughter. But the sentence seems about right to me—after all, he wasn’t convicted of murder, nor did he commit murder. If I thought he’d received special treatment from the judge I’d feel differently—but I think Mr. Janklow got the same sentence you or I would have received in similar circumstances.

The AMA (American Motorcyclist Association) is lobbying states for mandatory minimum sentencing in cases where motorists are convicted of killing motorcyclists. I’m opposed to mandatory sentencing guidelines in general—I think the “three-strike” laws were a terrible mistake, and this would be a mistake as well.

But it’s certainly true that far too many motorists receive little or no punishment for injuring and killing bikers. There’s no doubt in my half-a-mind this can be chalked up to anti-biker prejudices held by cops, prosecuting attorneys, and judges. And I don’t know what can be done to reverse those prejudices.

The AMA is taking, perhaps, the only viable approach—remove prejudice from the equation with mandatory sentencing rules. Sort of the same approach the military took toward race relations—you may not be able to change hearts and minds, but by imposing strict rules and harsh penalties, you can sure as hell change behavior.

Which is to say that while I don’t support the AMA’s “kill a biker, go to jail” campaign, I’m not opposing it either.

What I wish is that we had a doctrine of professionalism. We—Americans, our law enforcement officials, our judges—don’t take driving seriously. You can get away with “Oops, I didn’t see him.” If we took driving seriously this would never fly—what the hell are you doing operating a vehicle if you aren’t looking out for other drivers and obstacles? And so it would be, were I king of the world. 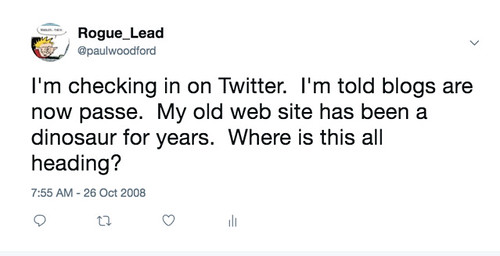 4 thoughts on “The Thing About the Thing”