It really shouldn’t be news that Harley-Davidson is moving some motorcycle production to its overseas facilities in Australia, Brazil, Thailand, and India. The company has manufactured parts and bikes in those countries for years, and it announced plans to increase production in Thailand months ago. Now, though, Harley’s going to move even more production overseas. Why? Trump’s trade war, which is looking more and more like a war on American jobs.

I’m not a huge fan of MSNBC’s Lawrence O’Donnell, but last night he offered an excellent explanation of what’s going on with Harley-Davidson and Trump, expressed in terms any American can understand. MSNBC won’t let me embed the segment, so here’s the link (you can also click on the image below). I promise you it’ll be seven minutes well spent. 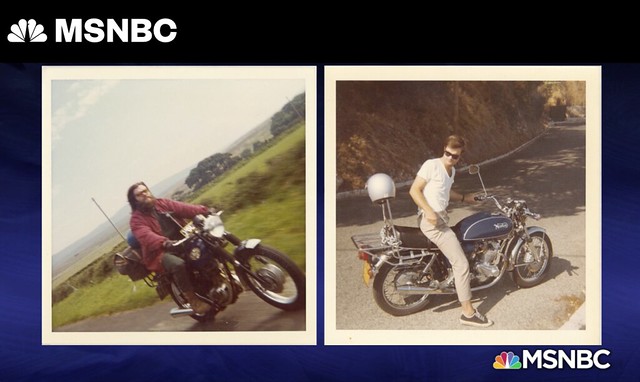 Watching O’Donnell last night, I learned he’s a biker too (that’s him in his glory days). My respect for the man went up a few notches. It turns out both of us started riding in the 60s and 70s, a motorcycling era when even British bikes were better than Harleys. We were both around for the Japanese invasion, with their eerily-perfect machines. O’Donnell makes the point that competition from those brilliant Japanese motorcycles was the reason Harley-Davidson wrested control of the company back from AMF in 1981 and made a big investment in improving the quality of its products. O’Donnell rode British bikes back in the day, but in the 1980s, when Harleys got better, he came home. As did I. As did a lot of us. 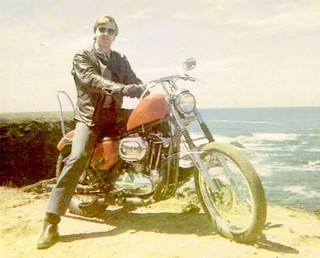 O’Donnell didn’t say so, but I’ll bet he grew up wanting a Harley. Who didn’t, back in the 1950s? My father taught me to ride on one when I was 14 or 15, but later, as a young married man, there was no way I could afford one of my own.

I remember riding a friend’s chopped Sportster (the orange beauty in the photo) during a 1971 trip up California’s north coast. At the time I owned a Honda 350, one of those sewing machine-like Japanese motorcycles. Getting on my friend’s Harley and chugging out onto the twisty Pacific Coast Highway was like stepping out of a Toyota Corona and up into the cab of a Peterbilt … a thoroughly intimidating experience.

My friend had built, by hand, a far better machine than the stock 1960s Sportster it had once been, but even so it was still a Harley of its day, leaks and all, and he worked on it constantly. Riding it was downright frightening: it was a scary, primitive throwback … yet none of that lessened my desire to own one some day.

That day came in 1986, when I bought a brand new FXR Super Glide. It was night & day better than the Harleys that came before, almost (but not quite) Japanese. I loved it, rode the hell out of it, and sold it only reluctantly when the Air Force sent us to Japan. A few years passed, during which I rode a 1988 Honda Goldwing (like the earlier Hondas, virtually perfect), and then in 1999 I bought my second Harley, a new FLT Electra Glide. Like the ’86, it too was excellent but not perfect, and today I’m back on Japanese iron, a 2001 Goldwing (though one made in the USA, back when Honda built them at its plant in Marysville, Ohio). Would I buy another Harley some day? I’ve long wanted one of Harley’s police models, with the taller suspended saddle, and if one ever comes my way at a price I can afford, absolutely!

On his show, O’Donnell showed a photo of him on his first Harley. Like me, he bought it in the 1980s when the quality of their bikes had improved … which it would not have but for competition from the Japanese. He went on to say he’d switched from German to American cars a decade ago. As with motorcycles, international competition from Germany and Japan drove American automakers to improve the quality of their products, and American cars can now hold their own on the world stage. It was the same with Donna and me: we drove VWs, Toyotas, and Datsuns right up to the 1990s when we switched to Fords and Chevys. We’ve never looked back, nor have we had any reason to.

Trump’s view on trade and competition is as primitive (and scary) as the Harley chopper my friend let me ride in 1971. His trade war isn’t going to benefit anyone, least of all American workers … workers like the men and women who built my Japanese motorcycle in Ohio back in 2001, the ones who build Mercedes-Benzes and Toyotas in the US today, and now, the workers who build American motorcycles in Wisconsin.

One thought on “Trade War on Two Wheels”