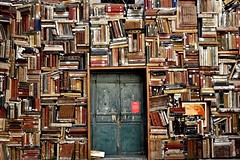 Did you watch the HBO adaptation of Ray Bradbury’s “Fahrenheit 451”? I thought it was strident and dreadful.

“Gateway Pundit, a popular, controversial site on the right that posts breaking news, says Facebook has been flagging its articles and referring people to alternative sources like the Associated Press.” Well, yeah — because Gateway Pundit’s shit is propaganda, not news. For an intelligent look at how Facebook and Twitter are addressing the problem of political advertising posing as news, click here.

Guess I’ll have to check out Feral House, since they say many of their titles are banned.

I can’t quite figure out what Ross Douthat is getting at in his op-ed “Free Speech Will Not Save Us,” but I think he wants readers to side with those poor beleaguered National Football League team owners whose only wish is for uppity black players to stop kneeling.

“Part of the skepticism toward traditional majors reflects a correct feeling that at some schools, some fields of study and course offerings are preserved largely because the faculty have a selfish investment in the status quo.” NYT op-ed about majoring in the liberal arts — most likely written by an English major.

Parents often challenge books their children are assigned or encouraged to read at school, and YCRT! frequently links to stories about such challenges. But here’s a new (and worrisome) thing: local law enforcement agencies stepping into the debate with censorship demands. Wando High School in South Carolina gave students a choice of four books on a summer reading list. Two of those books, “All American Boys” by Jason Reynolds and “The Hate You Give” by Angie Thomas (reviewed in a recent YCRT!), address police brutality. Surprise — the po-po don’t like it.

A Wisconsin high school told its valedictorian to remove references to discrimination and school shootings from her commencement address, “out of fear that they would provoke disagreement and judgment, and that others might feel attacked.” The student refused to speak, and a local newspaper later published her address in full. You know what? The kids really are all right.

Did you know Dr. Frederic Werthram, 1950s anti-comic book crusader and author of the infamous “The Seduction of the Innocent,” warned that Batman was homosexual and children who read Batman comics were more likely to “become gay”? Well, he did, and Batman’s suspected homosexuality so harmed the brand that DC Comics was forced to introduce a new character: Batwoman, to give Batman a heterosexual romantic interest (in an interesting twist, today’s Batwoman character is generally perceived to be lesbian).

The American Library Association has renamed the Laura Ingalls Wilder Medal. It is now the Children’s Literature Legacy Award. And the deplorables are up in arms.

Project Blitz: the latest attempt by religious extremists to use the coercive powers of government to secure a privileged position in society for their version of Christianity.