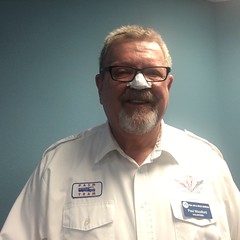 Still covering my nose with pads and tape every morning, and no clear end in sight. The dermatologist now says the skin graft is taking, but all I see, when I expose it to change the dressing, is an unsightly mess. The tape, once an annoyance, is now a blessing, because I couldn’t go out in public without it. Guys my age, seeing my taped-over schnozz, have started coming up to me at the air museum to show me their skin cancer scars. One of them said when they put a skin graft on his nose, he had to keep it covered for three months. Added to this, leg stretching exercises and mental preparation for knee replacement surgery nine days from now.

All of which is distracting. I can’t get through serious movies or dramas on streaming TV. Instead I’m watching Frasier and Veronica Mars reruns. Books? Airport thrillers and mysteries. Way too much Twitter. After the knee surgery I’ll have a project and timetable to focus on — physical therapy, at-home exercises, walking and bicycling — all with the goal of being back to normal by October, when we plan to drive cross-country for a family reunion.

Though we may fly instead. Now that I’m losing weight, perhaps flying coach won’t be such torture. We’ll see.

Mr. B had a fright this morning. We were out for our daily walk, and as we turned up the street next to ours his head snapped up and he stopped, intently staring down the road. I looked for coyotes in the brush and cactus between the houses but didn’t see any, so tried to keep walking. Mr. B. dug in, refusing to budge. As soon as I gave his leash some slack he turned around and started pulling me back the way we’d come. Okay, I said, you’re the boss. He kept turning his head to stare back down the street as we retraced our steps.

As we turned into our cul-de-sac, I took one last glance down Danger Road and suddenly realized what Mr. B had seen: our neighborhood Griswold, who lives three houses down that street, had put up an inflatable Uncle Sam for the 4th of July. I’m so used to this guy’s garish holiday yard displays I no longer notice them, but it’s all new to Mr. B, and seriously, who wouldn’t be brought up short at the sight of a hideously grinning 12-foot-tall red, white, and blue scarecrow that hadn’t been there yesterday?

I do love that dog. But you probably knew that.

One thought on “Sunday Funday”