You Can’t Read That! Banned Book Review: A Bad Boy Can Be Good for a Girl

The ALA video, above, highlights student activism in the face of censorship and book-banning attempts. Here’s one activist student’s story, and it’s an inspiring one.

Long as I’m throwing lists at you, here are the top 40 censored movies.

Decades of scientific research about LGBT people, much of which did not exist in other than paper document form, was destroyed in the Nazi book burnings of the 1930s. Here’s a sad but illuminating Twitter thread about it.

“One day, I saw a tract that had been donated by a special interest group. In my ignorance, I said, ‘Throw that away.’” This librarian’s op-ed argues for libraries to present all points of view on current and historical issues. Wait a minute. Wouldn’t “all points of view” include Jack Chick tracts, pamphlets promoting white supremacy, and other forms of propaganda?

Something to put on your watch list: the HBO premiere of “Fahrenheit 451,” set to air on May 19. Trailer here.

What is free speech, anyway? “Days later, when a professor tweeted that the late Barbara Bush was a ‘racist,’ the university’s tone was different: the faculty member would be investigated for her remarks, which, a campus president said, went “beyond free speech.”

Safe Libraries says its mission is to promote “public awareness of crime, sexual harassment in libraries, and inappropriate books and web sites in schools due to American Library Association policy.” This Safe Libraries blog post, though, is an attack on former U.S. Deputy Attorney General and Acting Attorney General Sally Yates, an attack offering only the flimsiest connection with libraries and the ALA. Maybe now, in addition to going around the country with its scary slide show, designed to stir parents up about the dangers of books and libraries, Safe Libraries can join Ted Nugent in calling for Democrats to be shot on sight.

What comes after Howard Zinn and “A People’s History of the United States?” “By the People,” by historian James W. Fraser, soon to be banned at a high school near you!

Here’s a follow-up to an earlier YCRT! item on the banning of “A Bad Boy Can Be Good for a Girl” at Cody High School in Wyoming, where “… the public library is stocking up, townspeople are buying copies for themselves and others, and Tanya Lee Stone’s Facebook friends are ordering in droves.”

I guess it’s only appropriate, then, that this YCRT! banned book review address the book in question: 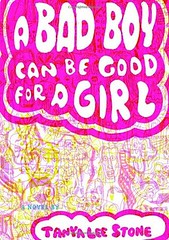 As a reader with an interest in banned books (and a writer of a periodic column on same), I read Tanya Lee Stone’s young adult book “A Bad Boy Can Be Good for a Girl” after learning it had been pulled from a high school library in Cody, Wyoming.

In November 2017, after one parent complained the book was trashy and inappropriate for high school students, a school trustee unilaterally removed it from the Cody High School library, warning there’d be “more to come.” True to his word, the trustee has since pulled two more books, David Levithan’s “Two Boys Kissing” and Herbie Brennan’s “The Wizard’s Apprentice.”

After learning what the trustee had done, Cody High School conducted a formal review and recommended keeping “A Bad Boy Can Be Good for a Girl” in the library, but the school board went along with the trustee and the book has been permanently removed (no word yet on the fate of the other two titles).

Here’s part of what the original complainant said about the book and about Cody High School’s library in general:

Parent Amanda Minor said her child nearly checked the book out, at which point she looked into what it was about. “People are unaware of what is in library,” she said. “People should know what is available. The high school library is worse than the public library.”

From the same source (see link above), here is what the trustee had to say about the book:

Briefly summarized, it’s three first-person stories told by different high school girls: a freshman named Josie, a junior named Nicolette, and a sophomore named Aviva. At different times in the same school year, all three are attracted to a handsome senior on the football team, the bad boy of the title, whose thing is to “nail” girls and brag about his conquests to his buddies. The girls deal in different ways with their own teenage hormones and the pressure the bad boy puts on them. Josie, though sorely tempted, resists and later tries to warn other girls at her school. Nicolette, sexually experienced but still naive, jumps into his arms and only learns she’s made a reputation-destroying mistake afterward. Aviva thinks he shares her level of commitment and succumbs, but the minute she says “I love you,” he loses all interest.

The book is a paean to Judy Blume’s great YA novel “Forever,” also about a high school-aged girl’s first sexual encounter. “Forever” is in fact part of the plot in “A Bad Boy Can Be Good for a Girl.” After resisting going all the way and enduring the football player’s scorn, Josie finds the school library’s copy of Judy Blume’s book and writes a warning about the guy on the blank end pages. She then tells every girl she knows to check the last pages of the book in the school library. Eventually Nicolette and Aviva read the pages as well.

Judy Blume’s “Forever” has been and continues to be banned in school districts around the country, but young women treasure it and pass copies around, and that apparently is what’s happening in Cody, Wyoming with “A Bad Boy Can Be Good for a Girl.” Parents and school trustees can ban it from the school library, but they can’t stop girls from buying and sharing copies.

Is the book junk? Is it pornographic? If you’re one of those parents who cannot deal with the thought of your daughter growing up and having sex, a parent who won’t allow a daughter to get the HPV shot that will help prevent cervical cancer and a horrible death some day, you will by shocked by “A Bad Boy Can Be Good for a Girl.” Why? Because in it 14- to 16-year old girls think about, come close to having, and actually do have, sexual intercourse. There are no pornographic descriptions of the sexual act, but there is some heavy petting, and of course there’s no getting away from the fact that the book is about girls and sex and the dangers thereof.

If you’re another kind of parent, this is exactly the sort of thing you’d want your 14-year-old daughter to read, because it might help her make better choices when those bad boys start coming around.

Whichever kind of parent you are, you should know better than to try to ban books. The anti-sex faction in Cody, Wyoming, virtually guaranteed that every teenaged girl in town will now read “A Bad Boy Can Be Good for a Girl.”