“One thing was certain: Rose had been wrong about the world becoming small again. Or at least it would not be the same small world it had been. Too much had changed. And amid those shifts and realignments, Anna had slipped through a crack and escaped.”
— Jennifer Egan, Manhattan Beach 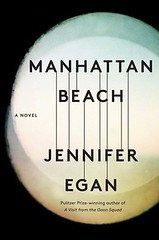 Yes, I’m still reading the Jack Reacher novels in order. “61 Hours” stands out for three reasons, one or all of which may be considered spoilers by some. You may consider that a warning.

The second is Jack’s celibacy. In each of the previous 13 novels, Jack has sex with one or another of the attractive, intelligent women characters he encounters. In this one, he doesn’t. There’s a bit of flirting over the telephone, strongly hinting at future consummation, but that’s it.

The third is the ending, where Lee Child leaves Reacher’s fate up in the air. But hey, we’re all grownups here: there are at least a dozen Jack Reacher novels after this one, so give me a break … of COURSE he survives.

The countdown clock left me cold. Lee Child’s intent is to keep the suspense high as zero hour approaches, but by the time we’re halfway there we pretty much know what’s going to go down, and it becomes superfluous. The lack of sex was a novelty, and I was happy to see a break in the formula. The ending bothered me not a bit.

In “Worth Dying For,” the 15th in the series, we find Jack Reacher being dropped off at small-town crossroads in Nebraska, just a few days after surviving the underground bunker explosion that ended the 14th novel, “61 hours.” He’s stiff and sore but mending fast, as evidenced four pages in by the beating he administers to a man he suspects of battering a helpless wife.

I would have to re-read a couple of the earlier novels to make sure, but “Worth Dying For” is definitely one of the best Reacher novels. The villains, four men named Duncan, are particularly vile, the townspeople thoroughly beaten down and in thrall to them. It’s a situation Reacher can’t ignore, particularly when he hears about a murder the Duncans are believed to have committed 25 years ago. This cannot stand. And it doesn’t.

As always, Reacher is way ahead of the reader when it comes to figuring out what the bad guys are really up to; I couldn’t even guess what they were smuggling into the USA from Canada until Reacher shared his ideas with the band of downtrodden townspeople he’d befriended.

But back to the beatings. Reacher administers a record number of them, each new beating more gratifying than the last. I didn’t realize I was so vengeful and bloodthirsty … until, that is, Jack Reacher brought it out.

Damn, this was an engrossing and fun read. It would make a hell of a movie. 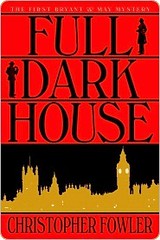 Full Dark House (Bryant and May #1)
by Christopher Fowler

A friend recommended Christopher Fowler’s Bryant & May mysteries. Now, friends recommend books all the time, but this friend went one step further: she “gifted” the first two novels in the series to me through Amazon, which in turn made them materialize on my Kindle. How could I ignore a recommendation like that?

I’ve just finished the first one, “Full Dark House,” a great introduction to Bryant & May, set partly in present-day London at the end of their long career together, and partly (actually mostly) in the London of the Blitz, when they worked their first case, a series of murders at the Palace Theater.

My friend loves these books for their descriptions of London, a city she knows well. I mostly know London through fiction. Christoper Fowler, knows its every hidden part and revels in describing its nooks, crannies, circuses, tube stations, and grand old structures, of which the Palace Theater is one, a fabulous setting for a murder mystery.

Fowler is known for his black humor. I enjoyed his matter-of-fact references to the criminality that descended upon London during the Blitz, his showing up of Londoners as something less than the doughty home front warriors the government of the day wished Britons and the world to see. Why would I think rape and looting funny? Because all the other mystery novels set in WWII London work so hard not to mention the reality of human behavior, I guess. Thank you, Mr. Fowler!

Bryant and May are a great pair, as opposite as can be, perfectly suited for the Peculiar Crimes Unit, which may well have been created to capitalize on their talents.

I admit having to adjust to the Britishness of this mystery novel, and was about forty pages in before I started to really enjoy reading it; past that point I couldn’t put it down. Great fun, memorable characters, the requisite amount of suspense, the aforementioned intimate feel for the great city of London and its recent history.

Thanks, dear friend, for your generous gift (I hope you loved the Paolo Bacigalupi novel I gifted you in return). Now on-on to number two in the Bryant & May series, “The Water Room.” 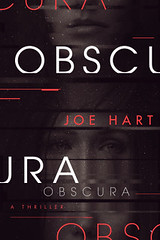 Disclosure: I was offered a pre-publication copy of “Obscura” in exchange for a review.

I read this one quickly. It’s a whodunit with a science fiction backdrop featuring space travel and teleportation. The protagonist, Gillian Ryan, is a medical researcher looking for a way to stop a mind-wasting disease that has already claimed her husband and is now beginning to affect her daughter. On the promise that NASA will fund her research if she spends six months in orbit helping solve a similar problem affecting astronauts on a space station, she agrees to go.

What’s happening up in space is sinister indeed, but most readers, as I did, will figure out what’s going on long before Gillian does. Still, the climactic scenes, where everything comes to a head, are worth the wait.

I didn’t like Gillian much. She spends most of her time feeding an addiction to opioids and crying over her dead husband and suffering daughter. I mean, yeah, the situation she finds herself in sucks, but enough with the pill-popping and crying already. I like my female protagonists to show a little pluck, although I will admit that later in the novel, she comes through when the going gets tough.

The plot moves along and keeps you turning pages, but apart from Gillian, there isn’t a lot of character development, and I had questions about the science behind teleportation … but I knew from the beginning Hart’s novel would be more of a mystery thriller than a serious attempt at speculative fiction, and was willing to overlook my objections.

The pre-publication Kindle copy I read carried a notice that it is an “uncorrected proof,” but I found no errors, typos, or formatting problems with the book. If it’s marketed to the mystery/thriller audience, I don’t doubt it’ll do well. 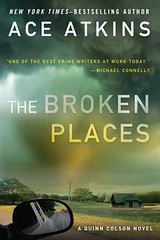 I enjoyed the first two Quinn Colson novels. Quinn, fresh out of the Army, is starting a new life as sheriff of his Mississippi home town, and evolving into something more than he was before. Sadly, evolution takes a break in this, the third novel: Quinn is more or less static, as are his relationships with key recurring characters like his deputy Lille, his sister Caddy, and corrupt county kingpin Johnny Stagg.

There are fresh villains in this one, a pair of shitkickers on the run from prison. They’re colorful in a lowlife way and eventually Quinn deals with them, but for most of the book they run riot while Quinn dithers about this and that, and in the end the real villain, Johnny Stagg, stays in power and nothing is really resolved. Which is fine in that it sets the stage for future installments, I guess, but it was a somewhat unsatisfactory read.

I didn’t click through all the pages of reviews on Goodreads but did read the ones on the first page, and can’t believe I’m the only one asking how can it be that bad guy Esau, bleeding to death from a high-powered rifle shot at the end of one chapter, is up and at ’em in the next chapter, the bullet never again mentioned? Could it be Ace Atkins mislaid his plot notes and simply forgot he’d shot one of his characters in the back?

I’m pretty meh on this one. But I’ve been reading the Jack Reacher novels in order at the same time, and a couple of the early ones were duds too, so I’ll give Quinn Colson another chance by reading installment #4. 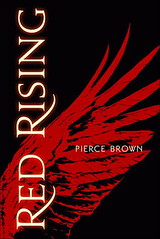 Did not finish, no rating.

I was short-tempered with my wife the other night. She called me on it and I couldn’t explain what had set me off. Later I realized it was frustration with this crudely-plotted emotionless and flat screenplay of a book.

Sitting next to me on the coffee table was the third volume of Philip Pullman’s “His Dark Materials” trilogy, the very sort of young adult science fiction adventure I had hoped “Red Rising” would turn out to be. I put the one down, picked up the other, and found my lost equanimity. Life is too short to read bad YA.