Air-Minded: A Visit to the Museum

A few years back a friend told a friend of hers to hook up with me on Facebook. She thought we’d hit it off, since Kevin had been an F-15 maintainer at Kadena Air Base, stationed there at the same time I was. I didn’t know him then, but was happy to add him as a friend, especially since in his post-USAF life he’s a musician, entertainer, and producer, and I always read his posts about concerts and other Tucson events with interest (he’s currently president & CEO of to the Southwest Soul Circuit).

Last week he asked about visiting Pima Air & Space Museum and I encouraged him to come on my next volunteer day, which was yesterday. He took my tram tour and explored a couple of the display hangars, and wrote a great post about his day on Facebook. 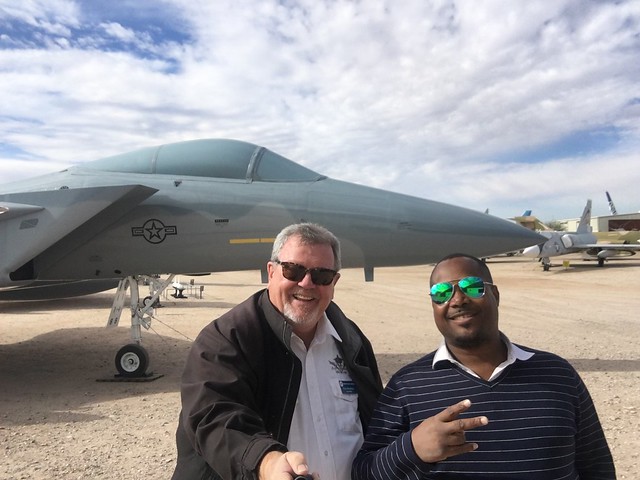 Part of it’s about me, and it’s head-swelling stuff, but that’s not why I’m sharing it here. It just felt good to help a fellow vet and Kadena Eagle mate reconnect with a past we share, and to finally make a personal connection with someone I knew only on social media.

A few people who likewise knew me only through my blog posts here and on Daily Kos have looked me up at the museum, and it’s always exciting when they do. Kevin’s visit was especially fun, since we had the tram almost to ourselves and were able to have a dialog, instead of me sticking to the script and doing all the talking.

Here’s Kevin’s writeup of his visit to the air museum:

WOW…. yesterday I had a WOW moment, a moment in which words escaped me because of the gravity of the moment.

A little over four years ago, I became Facebook friends with Paul Woodford at the suggestion of our mutual friend Martha Retallick. Paul and I quickly realized that we just so happen to have been stationed at Kadena Air Base in Okinawa, Japan at the exact same time in the early ‘90s. He was an F-15 fighter pilot with the 44th Tactical Fighter Squadron, I was an F-15 avionics technician with the 12th Aircraft Maintenance Unit.

Paul had invited me to the Pima Air & Space Museum to see some cool stuff and to take a tram tour. I immediately jumped on that opportunity and met Paul face to face for the first time. I had always had a healthy respect for those who possess the mental, physical and emotional ability to be a fighter pilot, and Paul didn’t disappoint. I just so happen to be on the tram tour that Paul conducted. I was particularly impressed with his knowledge of aerospace history, his knowledge of aircraft capabilities, his mental prowess and skills as an orator. It reiterated to me that he had always been a man with “The Right Stuff.”

I can’t express to you all how good I felt seeing my favorite airplanes at the museum. It’s been since the mid 90s that I’ve been exposed to the aviation world. My Air Force days were a big part of my maturation from a kid to a man. I will always cherish my time in the military.

The most impactful moment of the day for me was when I had the chance to walk out to, and look around, an F-15C. At that moment, I came to the realization that my current work ethic, attention to detail, sense of pride in my work and the integrity I needed for others to trust my work was formed mostly from my time maintaining the flight controls and various other F-15 systems which were monitored by it’s various cockpit indicators. You can imagine how I must have been “getting into my feelings” at the museum yesterday.

I also took a moment to visit Hanger 3. My most notable moment there was learning about the B-24. I found new respect for those brave souls who fought and died in combat while flying any of those earlier aircraft.

I had a cathartic experience at the Pima Air & Space Museum and I think that you all should visit this jewel of a place whether you live in Tucson or visit.