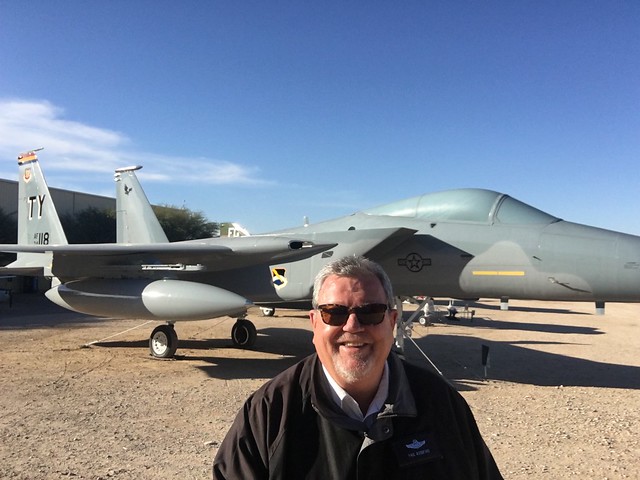 This photoblog is primarily about the newly restored F-15A at Pima Air & Space Museum. I wrote about this Eagle in September 2011, when it was moved from the back acreage of the museum to the head of fighter row. What piqued my original interest was its tail number, 74-0118, because I flew 1974 Eagles at Elmendorf AFB, Alaska, in the mid-1980s.

[Some of you may be tempted to call me out on the existence of 1974 Eagles, seeing as how the first F-15s weren’t delivered to the USAF until 1976, but the year in the tail number indicates the fiscal year the Air Force paid for it, not necessarily (in fact hardly ever) the year it was built or delivered.]

The hope that I might have flown this particular jet evaporated after I looked through photos of my days in Alaska and realized our jets had earlier tail numbers than this one. Later, though, a reader who’d been a maintainer at Langley AFB, Virginia, wrote to say he thought 74-0118 had once been assigned to the 27th Tactical Fighter Squadron there. I did NATO top-off training at Langley in the fall and winter of 1978, en route to my first operational F-15 assignment at Soesterberg AB in the Netherlands. We newbies flew some of our NATO training missions in the brand-new 1977 jets we’d later fly at Soesterberg, but we also flew missions in older jets assigned to the 27th TFS. So I may have flown this particular jet after all, a happy thought.

I don’t know which bases 74-0118 was assigned to after it left Langley, but its last assignment, as indicated by the TY code on its tail, was Tyndall AFB, Florida, where from 1983 to 2010 the USAF trained new F-15 pilots (in my day it was Luke AFB in Phoenix, Arizona). Here are two older photos of PASM’s Eagle, the second showing the sorry state it had fallen into prior to restoration: 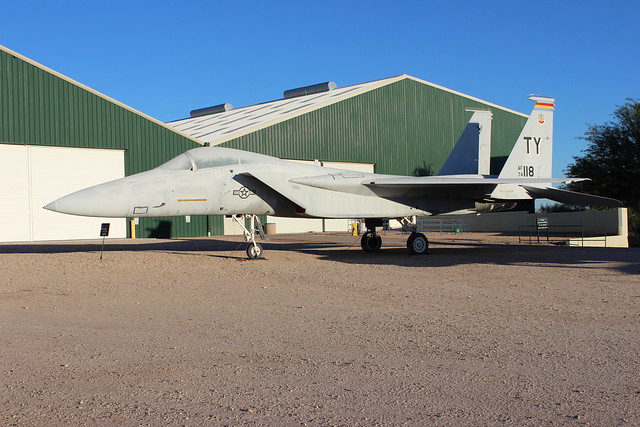 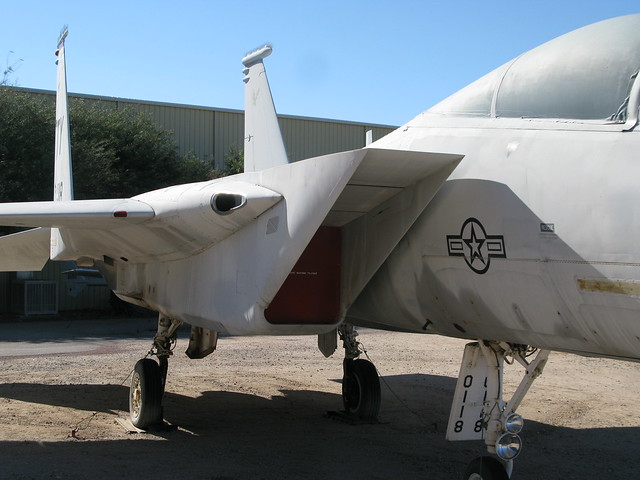 And here it is fresh out of the hanger with new paint and markings, plus wing pylons, AIM-9 Sidewinder launch rails, and external 600-gallon fuel tanks, looking now like it means business: 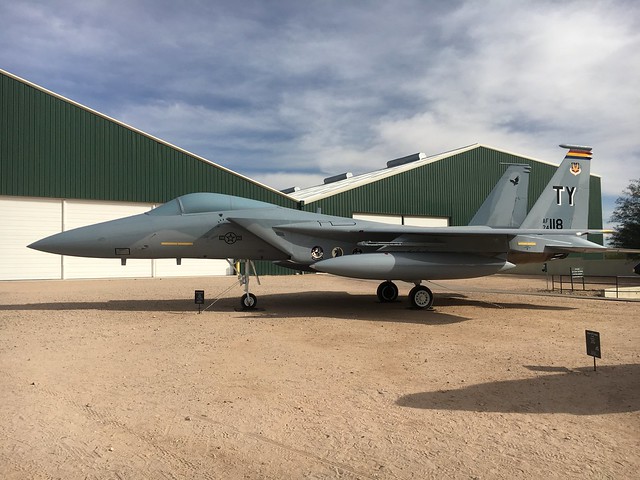 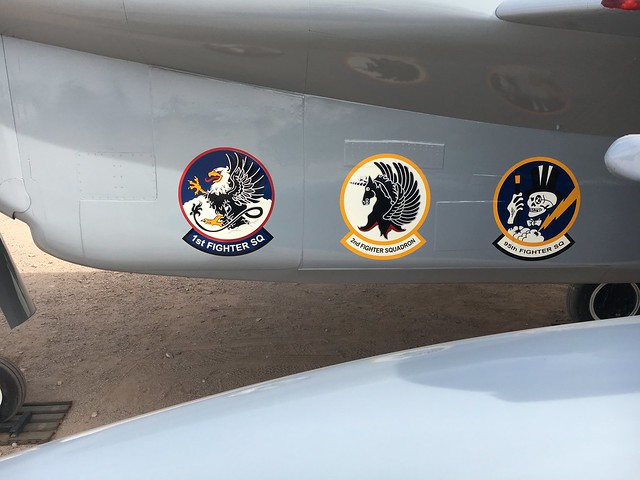 The decals in the second photo are for the 1st, 2nd, and 95th Fighter Squadrons, all of which flew F-15s under Tyndall’s 325th Fighter Wing. I used to think the 95th had one of the coolest patches in the Air Force. I still do. Even though the pilots who wore them used to be coneheads.

[From the 1950s to the late 1980s, the 95th was an interceptor squadron, flying F-94s, F-86Ds, F-102s, and F-106s for Air Defense Command: fighter pilots flying for Tactical Air Command called ADC interceptor pilots coneheads. The 95th later flew Eagles, and today flies F-22 Raptors, and no one has called its pilots coneheads in a long time.]

Sticklers may quibble about the glossy paint on PASM’s F-15, and I agree: it’s not accurate. Camouflage paint on operational military aircraft has a matte finish. You don’t want sunlight glinting off your shiny airplane and giving some MiG pilot an early tally ho. But several of the newer restorations at the museum have a clear coat on top of the camouflage paint, giving them a glossy appearance they never had in real life. It’s for a good cause: the clearcoat holds up better under the brutal Arizona sun, and this way the museum doesn’t have to repaint aircraft nearly as often. I can live with that.

Walking through the main hanger I noticed they’ve mounted a big-ass Browning machine gun on our OH-58D Kiowa Warrior (technically, an M2HB .50 caliber machine gun). This mean little helo used to have LAU-68 rocket launchers loaded with 2.75-inch Hydra rockets on each side (there’s still one on the right side). 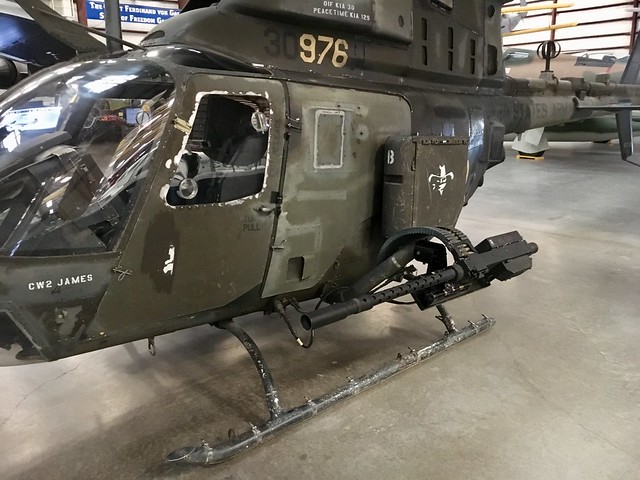 As I took that photo, a fellow volunteer docent asked me about the difference between machine guns, cannons, and mini-guns, all of which arm various combat aircraft. I didn’t answer, and I wish I could say it was because I was shocked at his ignorance, but I was as much in the dark as he was. Aren’t they all guns anyway?

I looked it up and here’s my simple-minded explanation (gun nuts are welcome to rip me a new one in the comment section): yes, they’re all guns, just as all ships are boats. The size of the projectile is what differentiates the two. In general use that means a .50 caliber round is fired from a rifle or machine gun, not a cannon. When the round is in the 20mm or larger range, it’s fired from a cannon. I used to stumble mentally when describing the “Gatling-gun style cannons” in the F-15 and the A-10 to museum visitors, because how could they be both guns and cannons? I stumble no more: the term is accurate after all. The original Gatling gun was a rotary-barrel machine gun, like the ones mounted on our museum attack helicopters, firing smaller projectiles. The Gatling guns mounted in modern fighter aircraft are cannons, firing 20mm and even 30mm rounds. Both fire at high rates of speed.

The last photo shows the tail of the museum’s F-105D Thunderchief. I was curious about the RE tail code so I looked it up. Turns out it was the tail code of a squadron I used to fly with, the 44th Fighter Squadron at Kadena AB, Japan. When I flew for the 44th at Kadena, it was under the 18th Fighter Wing, and our tail code was (and is) ZZ. In the Vietnam war, though, the 44th, which then flew the Thud, was part of the 355th Tactical Fighter Wing at Takhli Royal Thai Air Force Base. So in addition to the F-15A which I probably flew at Langley AFB in 1978, the museum has an F-105 that used to fly for a squadron I flew with in the late 1980s and early 1990s. 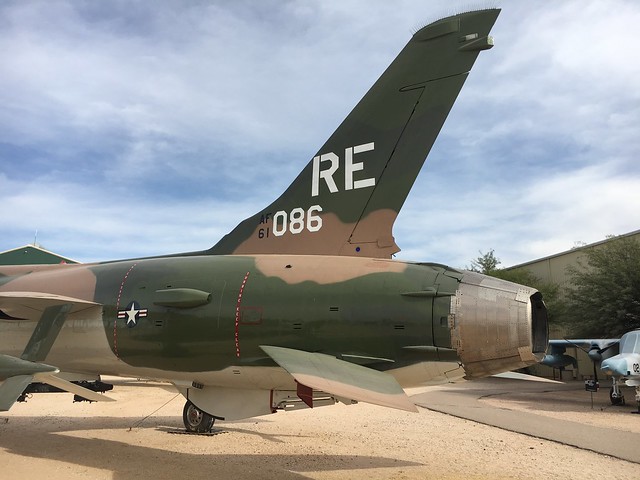 I’d be hard pressed to say exactly what that makes me so happy, but it does. Now if I can just talk the museum into painting my name on the side of that Eagle!