What a prude I’ve become, at least when it comes to pushing the rules on Facebook. A friend signed me up for a “Golden Days of Illustration” group. Nice at first with lovely color plates and vintage ads but pretty soon infiltrated by bare-breasted mermaids and fairies, then 1950s-era men’s magazine pinups. Underground comix sex panels won’t be long now. I kept thinking of Dan Ackroyd’s SNL character, the lounge lizard with the thing for nudes in classic paintings (“Tit-ian, heh heh heh”). While I was bailing out of that group, I likewise left the one Hash House Harrier group I still belonged to after a middle-aged hasher with the sensibilities of a 14-year-old posted a photo of a man’s wrinkled scrotum with the caption That’s Nuts.

Enough of that shit. I know where to find it if I want it; I don’t want it on Facebook.

Now that I’ve established my curmudgeon credentials, now about something positive? My son and I agreed on an itinerary for a motorcycle ride in May: Las Vegas to Carson City on day one; ride around Lake Tahoe and down Highway 395 to Lone Pine on day two; back to Vegas through Death Valley on day three. Greg’ll still have a day left with his rental bike, so on day four we’ll putt around Valley of Fire or maybe Mount Charleston. I just booked motel rooms in Carson City and Lone Pine.

Donna says she may come along and stay at our son’s house while we ride. If she does we’ll bring the doggies and trailer my motorcycle; if she decides not to come I’ll ride to and from Vegas, adding two days of saddle time to the trip.

Speaking of the doggies, they pine no more. While Donna was away Maxie didn’t want to sleep in the bed with me, so it was just Shatzi. Plenty of room. Now Donna’s back, we’re sharing our bed with two dogs. We keep talking about sizing up from a queen to a king. It’s time we do it.

Donna found a pair of socks for me in California. I damaged some veins in my right calf pulling Gs in my fighter days and now have to wear compression socks. The ones Donna brought home are just about right, and even better, not medical-looking. They sell them on Amazon and I just ordered two more pairs, along with two pairs of Duluth underpants.

About that: I am such a sucker. I hate the goober-accented slow-talking voice on those Duluth underpants ads and said so on Twitter. Duluth tweeted back, saying they were sorry I didn’t like their ads. Then I felt bad and wrote back to say it was just the ads I didn’t like and for all I knew their underpants were great. So I ordered some to find out. But hey, what’s the deal advertising underpants that don’t stink? Do people wear the same pair of skivvies more than once between washings? Jesus. If that’s Duluth’s demographic, maybe I’ll hate the product too, not just the ads.

I was on bicycles twice last weekend: Saturday with two Trail Trash friends and Sunday with the Hash House Harriers. The hash ride was so long and hot I got fatigued and almost went down. Didn’t quite go over the handlebar (thought for sure I was going to), but skinned my right knee on the back of the front tire and broke off the handlebar cell phone mount when I ran into it with my stomach. Surprised there’s not a bruise. Here I am at the hash ride beer check. 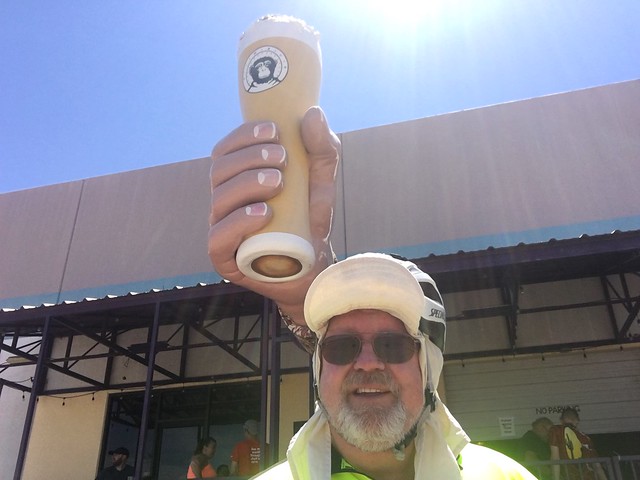 The next bike hash is on the 21st of May and I’m the hare. It won’t be as long as the killer hash last Sunday, that I can promise! This Saturday, Donna and I will ride with our Trail Trash friends again.