Donna’s been visiting family in California since the 12th. She returns on the 25th, next Tuesday. I’m over the hump now. Today, Friday, is the last long day with nothing on my schedule. Saturday morning I’m going for a short bicycle ride with friends; Sunday a longer ride with local Hash House Harriers; Monday of course is my day at the air museum.

You might think I’m getting short-changed in the vacation department, but I was with Donna on the last California family trip, and anyway I don’t want to fly unless I have to. We’re planning a car trip to California in 2018, this time to see friends as opposed to family. And my son and I have a motorcycle trip next month.

I’ve been occupying my evenings with “Buffy the Vampire Slayer” and am more infatuated with it than ever. Still, with four seasons to go, I can see how Buffy might become too much of a good thing. “Better Call Saul” is getting near my limit … perhaps if there were fewer commercial breaks it would feel more tightly plotted. Hey, though, another season of “Fargo” kicked off this week, and so far I’m all in. Unaccountably, an entire season of “Hap and Leonard” slipped by without me being aware of it. It must be on a channel I never watch otherwise, because I didn’t see a single ad for it. Oh, well, it’ll be on Netflix some day and I’ll catch up.

A friend asked me if it was legitimate for an A-10 pilot to call herself a fighter pilot, the “A” in A-10 standing for attack and all. Interesting question, not least because of that “herself.” There’s only one woman she could be referring to: retired USAF Colonel Martha McSally, now Congresswoman McSally, representing Arizona’s Second District in Washington DC. Martha did indeed fly A-10s, and was, I think, the first USAF woman to log combat time when she deployed to Saudi Arabia during Desert Storm. I know Martha a little bit and like her, but didn’t vote for her … she’s well over on the right, particularly on immigration and reproductive issues. I think my friend, the one who asked about fighter pilots, feels the same way.

But yeah, what’s a fighter pilot? The dictionary says a fighter is “a fast airplane that has weapons for destroying enemy aircraft.” The F-15 and F-22, dedicated to the air-to-air mission, are good examples. Dictionaries don’t have much to say about attack aircraft, but in the military everyone agrees they are fighter-type planes designed to deliver air-to-ground weapons, provide close air support, and provide cover during combat rescue missions. The A-10 is such an aircraft. Then there’s an entire class of multi-role fighters that fly both air-to-air and air-to-ground: the USAF’s F-16 and F-35, the Navy’s F/A-18.

In USAF pilot training, all students complete a primary phase in a two-place turboprop. At that point they’re selected for one of three advanced training tracks: fighter/bomber, airlift/tanker, or helicopter. Students selected for the fighter/bomber track, the top performers in the primary phase, will go on to fly the A-10, F-15 Eagle, F-15E Strike Eagle, F-16, F-22, F-35, B-1, B-2, or B-52. Subtract the B-designated planes, which are large strategic bombers, and what’s left are the fighters. It doesn’t matter whether they’re air-to-ground, air-to-air, or both … they’re all fighters, and the men and women who fly them are fighter pilots.

Getting back to Congresswoman McSally, she is absolutely a fighter pilot, a trained steely-eyed killer entitled to all privileges, immunities, and rights pertaining thereto. Would it kill her to be less of a damn Republican? 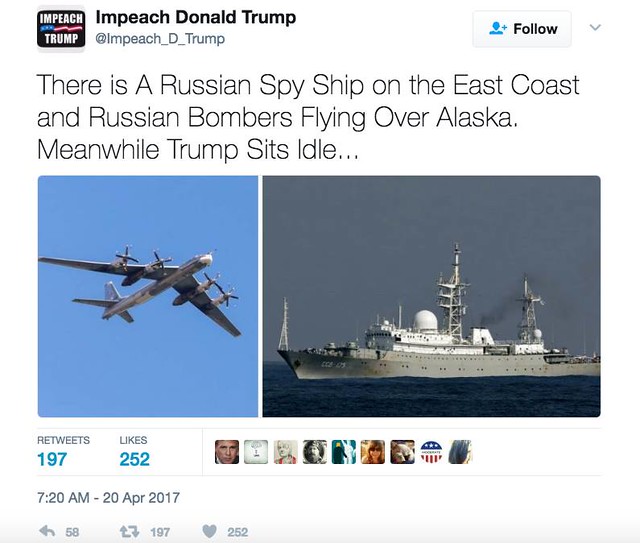 Oh c’mon, the Russians have been routing flights near American airspace and parking surveillance ships off our coasts since at least the Eisenhower administration. It’s a weekly, even daily occurrence. The USAF intercepts and escorts the airplanes (I did my share of it when I flew F-15s); the Navy and Coast Guard shadow the ships. We do the same thing to them. It’s ops normal, no big deal. When it comes to Trump, there’s plenty of real things to worry about.

And then there’s this: 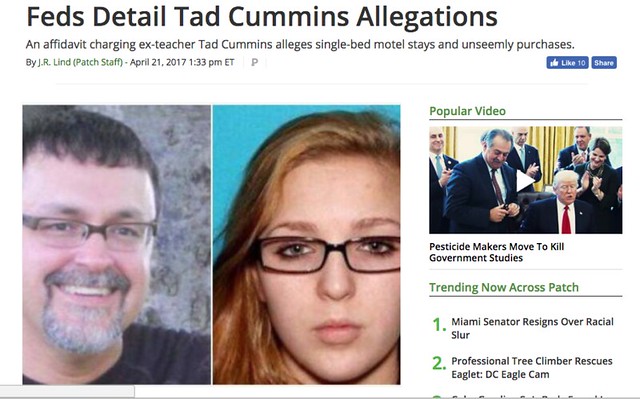 Whoa, single-bed motel stays and unseemly purchases? Why, whatever do you suppose those two were up to? Enquiring minds want to know!

That poor girl, her face plastered everywhere. She did a dumb-ass thing, running off with that loser, but was it dumb enough to justify ruining her life? What are her options now? A new identity? Facial surgery? That stuff doesn’t come cheap!

Do I need to remind you the pussy-grabber in chief has been accused of forcibly raping a girl who was even younger?

God, I need something to cleanse my palate. More Buffy, less news!