Thoughts on the past two day’s events, not terribly organized but somewhat connected:

If you’re going to remember anything Donald Trump ever said, remember what he said during the GOP debate on March 3, 2016:

He hit my hands. Nobody has ever hit my hands. I’ve never heard of this one. Look at those hands, are they small hands? And he referred to my hands if they’re small something else must be small. I guarantee you there’s no problem. I guarantee it.

Everything Trump brags about … the size of his fortune, his IQ, the ratings for The Apprentice, his electoral vote margin, his golf game, the number of pussies he’s grabbed … comes down to penis-measuring. Except he’ll never show his, any more than he’ll ever release his tax returns.

Speaking of measuring things, these side-by-side photos make me wonder: just how stolen was this election? 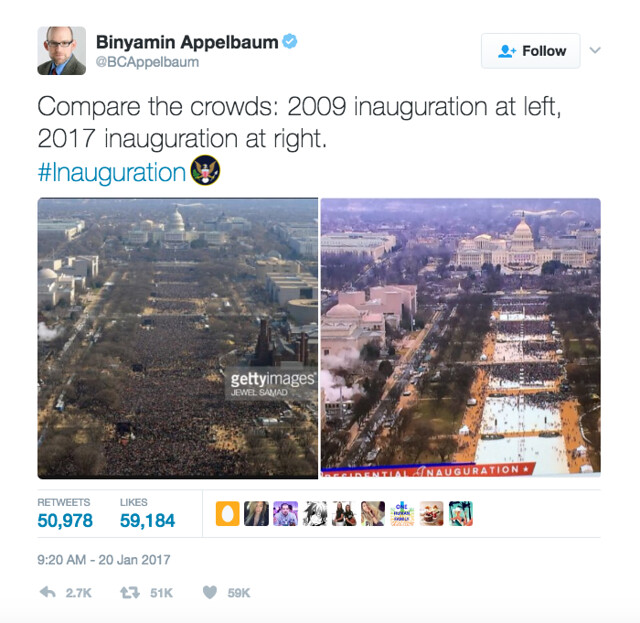 I was saddened to hear NPR “report the controversy” this morning over Trump’s inauguration crowd claims, by which I mean they replayed Trump’s penis crowd size lies with no commentary. Where most media outlets say right up front that both Trump and his press secretary are not telling the truth, NPR did not (at least that I heard, and I listened hard during the entire segment).

Of course NPR is well aware of the Trump administration’s plan to cut National Endowment for the Arts funding, and maybe that explains its timidity. 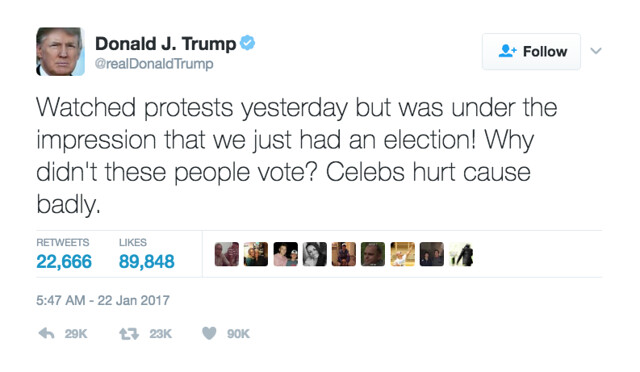 Um … who says they didn’t vote? I know a lot of women and men who participated in the Women’s March, not only in Washington DC but all around the country (including friends right here in Tucson, Arizona), and they all voted. I’m willing to bet the great majority of yesterday’s protestors did, and were among the three million who gave the popular vote victory to Hillary Clinton.

Maybe Trump’s talking about the thousands and thousands of women who marched overseas. In which case I agree … shame on them for not voting! Wait, what? 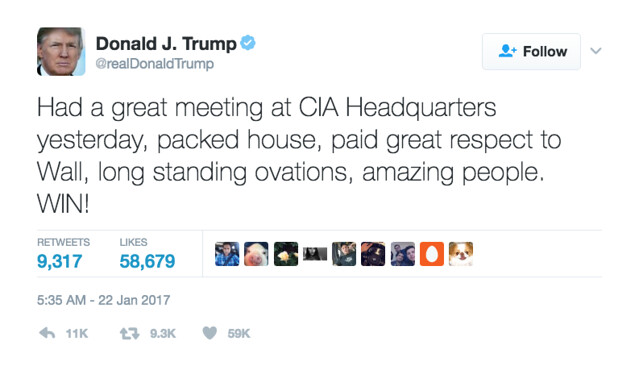 Many are saying (I know, I know) the people leading those standing ovations at the CIA were members of Trump’s entourage, that he brought his own cheering section with him. So far the media hasn’t taken this up, reporting instead that junior CIA staffers clapped and cheered while senior leadership stood stoically by.

I’m inclined toward the “many are saying” side. Why?

Let’s see how he gets on for on for a few months. The guy has only been in the job for a day or two. He got in so he’ll have to do the job. To my mind, all this protesting is a waste of time and effort and won’t change the fact he’s now the guy in charge.

I disagree. Trump’s an illegitimate president, rightly the focus of what I hope will be sustained and vigorous protest. Yesterday’s Women’s March really gives me hope we’ll not only make it through the next four years, but turn things around again.