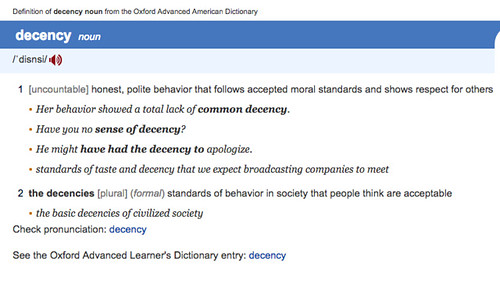 This week, a blogger named Ken Robert wrote about Mr. Trump and those who share his values:

My disdain for Donald Trump has little to do with Republican vs Democrat. It has much more to do with what I was taught growing up about being a decent human being.

Much of that was taught to me by my father, a man who wasn’t perfect but always tried his best to be decent toward and honest with everyone he met. Trump is just about everything I was taught not to be, and it’s become almost all but impossible to hold onto whatever respect I once held for people I know who support him.

… bullies, liars, blowhards, braggarts, and cheats. To me, championing a man who displays those behaviors on an almost daily basis demonstrates a fundamental flaw of character.

I said something similar last December after an acquaintance, a former military officer, posted this to Facebook: 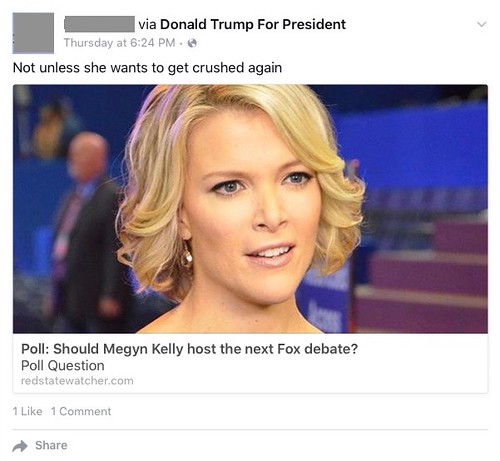 This was right after the first GOP presidential candidate debate, when moderator Megyn Kelly brought up Trump’s long record of denigrating women and asked him why women voters should trust him now. After the debate Trump attacked Kelly on Twitter, then asked Roger Ailes of Fox News to punish her. Ailes did his friend’s bidding, sending Kelly on an unscheduled 11-day “vacation.”

I was dismayed but not a bit surprised by Trump’s nasty and underhanded attack on Kelly. It was totally Trump. What shocked me, though, was that a military officer, a fellow fighter pilot and a man I had until that moment respected, would celebrate Trump’s lack of character.

This is from my own blog post, written a day or two later:

What Megyn Kelly had the balls to do fits my definition of “professional journalism,” and we need more of it. Trump’s underhanded, no-balls response to Kelly basically proved her point.

There has to be something drastically wrong, intellectually and morally, with anyone who could think Trump won a victory in that first debate or that he “crushed” anyone. Whatever that wrong thing is, it’s beyond my understanding. Are right-wingers really so far gone and lacking in American ideals that they think bullying and cowardice is something to celebrate?

What I do understand is that anyone who would post stuff like this has upside-down values and is unfit to sit at the table with decent people. Woe be it unto us if we stay home on election day and let this rabble take over.

Like Ken Robert, I can’t respect anyone who supports Trump. I couldn’t have made a blanket statement like that about Goldwater, Nixon, Bush, McCain, or Romney supporters. In Trump and his supporters I see not merely a lack of decency but its Bizarro World opposite … racism, lies, cheating, two-timing, back-stabbing, cowardice, bullying, broken promises, aggrieved self-pity … greed and personal aggrandizement the only “positives” on display.

Let’s say 40% of those who will actually vote are for Trump. Half of those … Hillary’s “basket of deplorables” … not only share but celebrate Trump’s racism and upside-down “values.” The other half will tell you they’re not like that. They’re decent people, they’ll say, supporting Trump only because they think defeating Hillary Clinton is more important.

You know what, other half of Trump supporters? I don’t know about that. Is decency something you can selectively or temporarily put aside? Can you embrace a racist without getting racist stink on you? Can you celebrate a cowardly bully without being judged one yourself?

Conservatives constantly throw Robert Byrd, the senator and former Ku Klux Klansman, at progressives, claiming his membership in the Democratic Party proves Democrats are the real racists. They never mention the fact that Byrd repudiated the Klan in the early 1950s and as a senator supported the Civil Rights Act, the Voting Rights Act, and many other advances to civil rights and liberties.