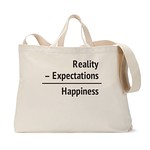 I expected last night’s debate between Hillary Clinton and Donald Trump would make me squirm, and boy did it. I worried Trump would bluster and talk over Clinton with little or no effort on the part of Lester Holt to restrain him, and that’s what happened. But after the first few instances of Trump’s bullying his lack of preparation became clear, and as the debate went on more and more of what he said was nonsensical. And defensive? Good lord. Hillary, with plenty of help from Donald, made him look the fool … not that that will change many votes.

Honestly, if the next two debates are going to be like last night’s, I can live without. Maybe there won’t be any more debates … some of Trump’s allies are already suggesting he bail, and it won’t surprise me if he does.

If anyone deserved to moderate a Trump-Clinton debate, it would have been Megyn Kelly. That was never going to happen, but Hillary made sure Megyn was there in spirit when she brought up Donald’s history of saying horrible things about women, specifically mentioning the Hispanic Miss Universe winner Trump later called “Miss Piggy” and “Miss Housekeeping.” I can picture Megyn grinning from ear to ear over that. This morning, by the way, Trump is attacking Miss Universe all over again … he just can’t help himself. As for Trump’s debate-night sniffles, which some are saying is evidence he did a line or two beforehand, Megyn’s revenge must be even sweeter: the man literally had snot coming out of his whatever.

I purposely skipped my Anytime Fitness workout this morning because I knew the wall monitors would be tuned to Fox News, and I couldn’t endure watching them try to twist what was plain for everyone to see into a Trump win.

Still, will Trump’s fans care? Here’s a disturbing take I saw this morning on Twitter: 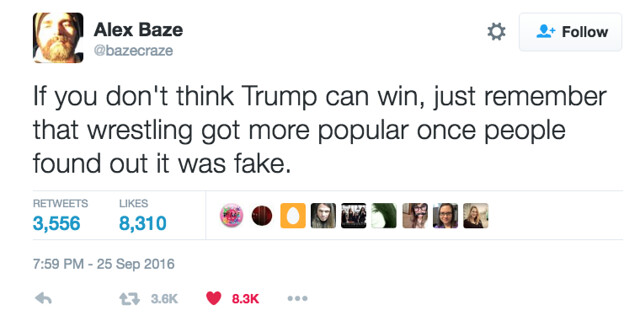 Monday morning I listened to an NPR interview with a Lawrenceville, Georgia man who plans to vote for Trump. The NPR correspondent credulously passed on the man’s story about a burka-clad Muslim woman, a total stranger, emerging from the woods next to his house, ripping down his American flag, then attacking his wife and daughter with it. The hell? Red flags were popping up all over the place, but the correspondent reported the attack as fact, saying the story had made the local news. So I turned to Google to look into those news stories.

Strangely, it appears a woman was arrested, but when you look for details all the stories merely say she was accused of attacking the wife and daughter, and the only witnesses were the family members making the accusation. The story is hearsay, and the sites carrying it are, to be polite, partisan ones: Fox News, World Net Daily, Jihad Watch, The Smoking Gun, sites that often indulge in anti-Muslim hysteria.

The reveal, to me, is the family’s insistence on saying the woman was wearing a full burka:

“A lady walked out of our woods in a full Burka, full attire, stares at us for a minute, then grabs my American flag off of my mailbox and charges towards us with it, just swinging it with all her might,“ the wife and mother said.

What is it with that word, full? You see it over and over in false anti-Muslim stories: the bit about “full attire.” It’s a signature, like alt-right types adding “hook-nosed” to “Jew.” I’m shocked NPR would report bullshit like this without fact-checking it. Took me five minutes, tops, so what the hell is NPR’s excuse for not doing due diligence?

Man, they’re out of the closet these days, the racists. Some combination of AM talk radio, Fox News, sensationalist media coverage of anything to do with race, and GOP candidates like Trump has led them to think of themselves as normal Americans, just ones with slightly different views, views they shouldn’t be ashamed to talk about in public.

I don’t know. Is racism a view? Or is it something worse? I defer to victims of racism, who’ll tell you it’s definitely something worse. I’m with this graffiti artist in Portland, Oregon: 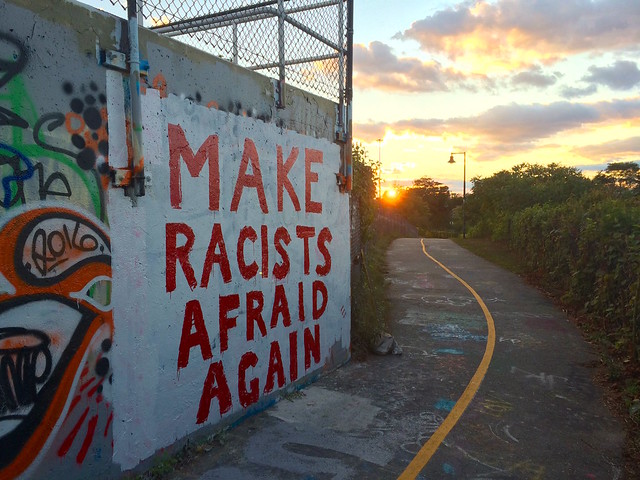 And now all the way back to Friday, when I first heard of Omarosa Manigault. The TV news show Frontline interviewed some people close to Trump who said he decided to run for president the night Obama roasted him at the 2011 White House Correspondents Dinner (the same night Obama oversaw the operation to kill bin Laden). One of those people was Omarosa Manigault, who said:

It just kept going and going and he just kept hammering him, and I thought, Ohhhh, Barack Obama is starting something that I don’t know if he’ll be able to finish.

And then she said:

Every critic, every detractor, will have to bow down to President Trump. It’s everyone who’s ever doubted Donald, who ever disagreed, who ever challenged him. It is the ultimate revenge to become the most powerful man in the universe.

Well, I thought, that sounds like Trump, all right. Thanks, lady, for giving us additional insight into the third-grade mentality of someone who dreams of getting even. And then I started seeing Tweets ridiculing Omarosa. As I said, I didn’t know anything about her, and to me it seemed her words were a warning. Apparently not. She’s a Trump sycophant, his former sidekick on The Apprentice, and she was bragging!

Funny thing is, if I wanted to scare people about Trump, I wouldn’t have said it any differently than Omarosa Manigault did.

We finally heard from our daughter Polly, but she didn’t tell us much. All we know for sure is that she’s living with her boyfriend. That and she isn’t working, contrary to what she said before. She also said she’d be by this morning to pick up more of her stuff, but it’s noon now and no Polly. Ace Hardware, where she worked before she moved out three weeks ago, has been calling: they have her final paycheck and they’d like their work shirts back.

You never stop worrying about your children, even when they’re all grown up.

Meanwhile, down at the air museum solar covers are going up in the visitor parking lot. I know I mentioned this before, but now the work is almost done and here’s a photo from yesterday: 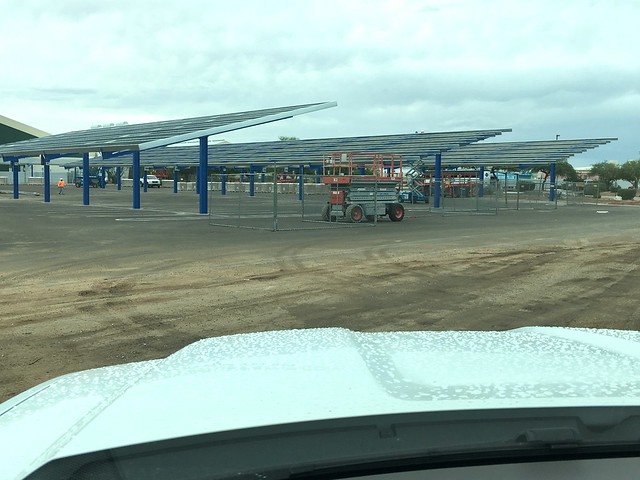 I bet they’re going to tell us volunteers not to come in early and take the covered parking spaces. Heh. Good luck with that!