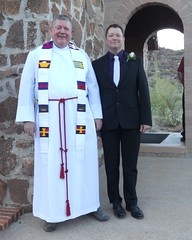 Aye, I do some ministerin’. I signed up for a mail-order Universal Life Church ordination about 15 years ago in order perform weddings for Hash House Harrier friends. Word spread, and before I knew it I was also marrying non-hashing friends and relatives, then random couples (no disrespect intended, if any of them are reading this) off the street.

Last year I was asked, for the first time, to officiate at a memorial service. At the time I thought well, that circle’s now complete. I knew the young lady who died, and maybe that made writing and performing her memorial service harder. I don’t know. Maybe it’s always hard.

A few days ago our friend Ann asked me to officiate at a memorial for her father, who died last week. I didn’t hesitate. I can’t say I knew Ann’s dad, but we had met and he’d made an impression on me. Ann already had some readings in mind, and the two of us worked together on the ceremony.

Donna and I met everyone in the library of the historic Arizona Inn yesterday morning: Ann and her husband Ross, her sister Susan from Montana, the deceased’s spouse Kenneth, and Robin, an old friend of Ann’s dad. I managed to get through the ceremony and the readings without tripping over too many words. The seven of us had a long lunch at the Inn afterward, and if things work out Ann and Ross might drop by this weekend, maybe even visit the air museum on Labor Day to ride on one of my tram tours.

Ann and Ross live far away, in Melbourne, Australia. They came to Tucson every year to visit Ann’s dad, and we’d catch up with them. I don’t expect they’ll be back after this. A trip to Australia’s not in the cards for us. This’ll probably be our last time together. We’ll remain friends, of course, staying in touch by mail and Facebook and all that, but still. It’s a sad time for many reasons.

I mentioned working at the air museum Monday. I forgot Labor Day is also a volunteer day, and was making plans to do some smoking and grilling before the light clicked. Maybe I’ll pick up some ribs later today and fire up the Fortress of Smoke™ Sunday instead.

Construction on the air museum’s new exhibit hangar is finally complete. The “soft opening” is Tuesday, the day after Labor Day. There’ll be an official public opening early in 2017, after a few newly-acquired WWII aircraft have arrived and been put on display. But there’s some cool stuff in there now, including two aircraft I haven’t gotten a close look at yet, a PBY Catalina and a Privateer, and today they’re opening up the new hangar just for us, the volunteers. I’ll be there later this morning, armed with DSLR camera and tripod, and you can expect a new Air-Minded photoblog soon.

Our daughter Polly’s moving out of the guest bedroom and into her new boyfriend’s place. She hasn’t slept here for a couple of weeks; in fact we’ve barely seen her at all. Sometime while we were away yesterday she must have come back to fetch her cats and some of her clothing. I don’t know what’s next for her, but since you’ve shared some of our experiences with her over the past 14 months, I’ll continue to keep you posted.

Have camera, will travel. Back soon.