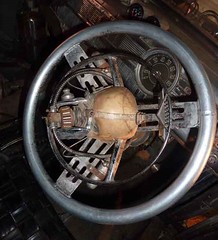 Remember the steering wheels Immortan Joe hands out to his War Boys just before they take off after Imperator Furiosa’s War Rig in Mad Max: Fury Road? Well, you can bet the very best wheel was reserved for Immortan Joe himself.

I wasn’t thinking about steering wheels when Donna said we could go looking for a new truck. Farthest thing from my mind. We have a big road trip coming up later this summer, and we wanted something comfortable to make the trip in. We loved making road trips in our old Ford pickup truck, so rather than a new car, we had another pickup truck in mind. Steering wheel, schmeering wheel, right?

Long story short, we set out to see if we’d both like the new aluminium-bodied Ford truck. A friend told us we really should look at Chevy trucks too, so we visited both the Ford and Chevy dealerships. After sitting in and test driving both trucks, we decided we liked the Chevy better.

On the way home we visited a local car broker who specializes in one- and two-year-old cars and trucks. We bought our last car there, an almost-new Chevy Trailblazer, a car we’ve been very happy with. It just happened he had a 2014 GMC truck on the lot, the equivalent of the new Chevy truck we’d just driven. The top two photos are of the 2015 Chevy; the bottom two are of the 2014 GMC:

The used GMC had every option we wanted and some more we couldn’t have afforded in a new truck. But what really impressed us was that it had a steering wheel that not only tilted but telescoped. Donna drives with the seat all the way forward, and her arms felt right with the steering wheel pushed in toward the dashboard. I drive with the seat all the way back, so I wanted the wheel pulled back toward me. In the new Chevy, which didn’t have a telescoping wheel, Donna was comfy in the driver’s seat but I had to stretch both arms straight out to reach the wheel.

Donna really preferred a new truck, so I went back to the Chevy dealership the next day to see if I could find the right truck with the telescoping steering wheel option, one like the used GMC we’d driven. Before I went back I got on the Chevrolet website to explore the different option packages, and saw that it was possible to order the Chevy model we wanted with a telescoping wheel. When I went back to the dealer, the first thing I told the salesman was that I wanted the telescoping steering wheel option. He found almost the exact truck we wanted, but it didn’t have that option. I told him I didn’t mind ordering one with the option and waiting a few weeks for delivery. He nodded and grinned, but after two hours of negotiation it became clear he just wanted to sell me the truck that was on the lot, not the one I wanted. When I pressed him on the steering wheel, he claimed it wasn’t an option.

Of course I knew better. It is an option, and I was almost tempted to drive him over to the car broker’s lot to look at the 2014 GMC and prove it. He ran off for the obligatory consultation with the sales manager, and came back with a new story: the only way to get the telescoping wheel was to order a more expensive model of the Chevy, running the price up another $5,000. I knew they were blowing smoke and that this was the next phase of the negotiations, but by then I’d soured on the new car dealership experience. Fuck ’em. I know where there’s a one-year-old truck, good as new, that has exactly what we want at a much lower price.

So that’s what we’re doing. Sure, we may have to replace the tires sooner rather than later, but otherwise it’s pristine, and we’ll be comfortable in it. Who knew a detail like that would be so important?