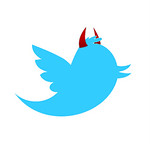 I’m souring on Twitter. It’s still of use as a check on breaking news, but god, so many assholes piling on other assholes. It’s not just #gamergate: the other day I read a long series of tweets that seemed to be accusing actor Rainn Wilson of being a rapist. That was news to me, so I Googled it: apparently Wilson is a rapist, if by “rapist” you mean he once tweeted a date rape joke that fell flat, and is making some videos with a man who was once accused of rape by an ex-girlfriend (I’m not going to link to any of this he said/she said stuff).

In Orwell’s 1984, the Two-Minutes Hate was a daily event. On Twitter it’s constant, its targets shifting from minute to minute. What the hell is with all this self-righteousness? Haven’t we all done things we wouldn’t want dredged up and hurled at us on social media?

I wonder how many more of these “recent converts to Islam” are going to go on the attack in Western cities? It occurred to me, watching the news from Ottawa last night, that young white men with Muslim-looking beards can from now on expect to be profiled and treated as potential terrorists. And dark-skinned men with Muslim beards? Katie bar the door!

Well, enough of that. Our daughter Polly dropped by this morning to pick up her bicycle and take it back to Ajo with her. I gave her a bicycle tire pump and a motorcycle nose wheel stand she can use when she changes the oil in her Ducati. Not to worry, she still has tons of things in our garage. As every parent of adult children knows, they’re not really gone until their stuff is gone too!

When Polly got here, before we knew she was here, the dogs saw her through the window and ran back to the office to let us know it was Polly! Polly! Schatzi normally barks, and so does Maxie, but this time Maxie was so excited she whined. It’s the first time we’ve heard her do that. I don’t know why that seems important enough to mention, but it does.

Speaking of kids, we’ll spend Thanksgiving with our son, daughter in law, and grandson in Las Vegas. I’m not sure if our granddaughter Taylor will be there too … I hope so … and according to Polly this morning, she’ll be there too, with her boyfriend David. 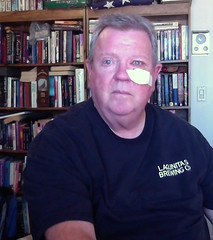 My swollen black eye is slowly getting back to normal. The cut under the bandage is vicious-looking, T-shaped, an inch-and-a-half across, and deep. I could post a photo of it, but I don’t want to turn the blog into a charnel house. When the stitches come out Monday I’ll have a nasty mark on my cheek, like those German university students of old with their fencing scars.

The first two days I couldn’t read. The swelling left a narrow slit to peer through and my left eye could only look straight ahead. When I put on bifocals to read the left eye saw through the top while the right saw through the bottom. This made for an unpleasant double vision so I watched TV instead since I could do that without the glasses. Now the swelling is down some, I can probably start reading through my glasses again. As for working on my blog, the monitor, like the TV, is far enough away that I don’t need glasses to see it.

Donna’s scar is pretty impressive too, but should heal without leaving a mark. She’s convinced her nose is crooked now, but I don’t see it. I think she’ll be fine. Man, the things they didn’t tell us about getting old!

The dogs have have smothered us in affection since we came home with our faces cut to pieces. I’m going to reward them with a car trip to Eegee’s for a sandwich and some fries. Yes, they get to share a little bit of my lunch, and I’m honestly not sure which part they like better, going in the car or helping me finish off the fries.

Back now. The answer appears to be c) both of the above. In heaven, doggies ride in cars and eat whenever they want, and damn I hope that turns out to be true.