Tuesday Bag o’ Woe Is Us

Two weeks ago my dermatologist decided he didn’t like the look of a spot on my cheek. He snipped off a sample and sent it to the lab. It turned out to be a basal cell skin cancer, so he scheduled me for an outpatient procedure yesterday.

When I told Donna I had to go in on Monday, she said, “Me too.” Donna sees a different dermatologist—hers too had found a basal cell growth and had asked her to come in on Monday to have it cut out. Donna’s appointment was in the morning; mine was in the afternoon. Here’s what we looked like afterward: 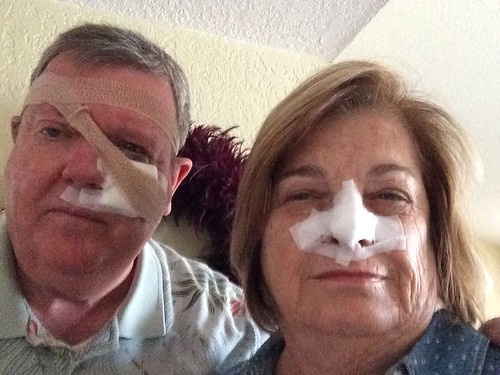 Donna has a one-inch vertical cut on the tip of her nose and I have a horizontal cut below my left eye. Stitches galore for each of us; those will come out sometime next week.

It’s odd we’d go through the same experience at the same time, but there it is. We’ve both been told to take it easy for a few days, to avoid bending over at the waist lest it put strain on our cuts, to sleep with our heads elevated. So we’re taking care of each other, and the dogs are pitching in too. They took one look at us and knew we needed love and affection. As we all know there is no more supportive friend than a dog, so it’s a good thing there’s one for each of us.

Donna’s had suspicious moles removed before, but I think this is the first time she’s had something cut out from underneath her skin. I’ve had five or six subcutaneous basal cell cancers removed, so this was old hat to me. The procedure itself is pain-free (if you don’t count the injection of the anesthetic), but the aftermath is unpleasant. My left eye is black and so swollen I can barely see out of it. Curiously it’s worse with my glasses on, but I’m sure once the swelling goes down it’ll be better. Donna’s not having any trouble with her nose, or at least none she’ll admit to.

I probably should say “Kids, use your sunblock and always wear a hat,” but I’m not certain I believe that’ll keep you from getting skin cancer if you’re prone to it in the first place. Oh, sure, it has to help—I’m religious about wearing hats outdoors, and I try to use sunblock when I go hiking, bicycling, or motorcycle riding—but I know I’m going to keep getting these things anyway. All my sisters are getting them too.

I see my dermatologist three times a year. He always finds several keratoses and freezes them; about once every two years he’ll find a basal cell growth and cut it out. Donna’s way behind me on that score, and I hope she never catches up.

Anyway, we’re fine. The big wrappings are off now. By Halloween we should be back to normal, or what passes for such, and when the neighborhood kids come to the door we won’t be nearly as scary looking as we were yesterday.

Question of the day: what do people who don’t have medical insurance do?