I haven’t opened Windows since I got my iMac … no, seriously, I meant to write about actual windows, the kind you open to air out the house when the weather is nice. After months of running it full time, day and night, it’s a treat to turn off the air conditioning. We can feel the house breathe. Long may it last, but already we’re pulling the covers up to our chins at night and pretty soon we’ll have to start shutting up the house before we go to bed. But let’s not think about lighting the furnace until we have to, shall we?

We took full advantage of the good weather this weekend, spending most of Sunday outdoors at Tucson’s Udall Park, once the site of a geomagnetic laboratory operated by the US Geological Survey. I set a trail for members of my hiking and running group, starting and ending near the old magnetic lab and this enigmatic survey marker:

There’s plenty of information about the old magnetic lab on line, but I can’t find anything on the triangular marker. Google, normally so useful, turns up nothing. I guess the marker will join the Railroad Children’s Cemetery on my list of unsolved Tucson mysteries. 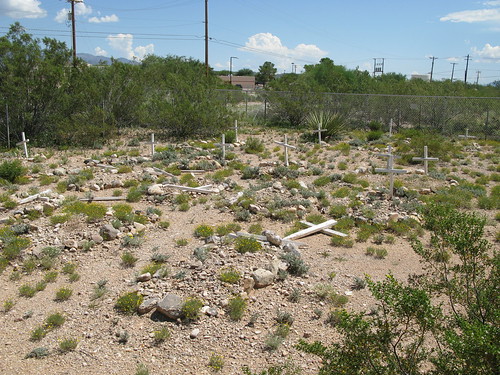 The cemetery is in Vail alongside the east/west railroad tracks running from El Paso to Tucson. I don’t think many people know it’s there. Even if they do it’s hard to find, just a 40′ X 40′ plot hidden in desert scrub. I first saw it on one of our running trails. A small wooden sign on the fence said “Railroad Children,” and that was all the information there was. My guess, looking at the condition of the wooden sign and wooden crosses, is that it dates from the early 1900s, possibly the late 1800s. I contacted an Arizona graveyards historian but never heard back. To this day I don’t know why those children died or what connection they had with the railroad. I suspect it might have had something to do with the influenza epidemic in 1918. Which reminds me, it’s time to get a flu shot. No, I’m not going to speculate on Ebola. Plenty of other people, most of them uninformed, are.

Toward the end of my September motorcycle trip, I downloaded and installed Apple’s new operating system (iOS 8.0) on my iPhone and iPad. The iPhone, a new 5S model I’d bought just months before, swallowed it whole, but the three-year-old iPad 2 gagged. A day later I heard Apple was rushing to get a fix out. Sure enough, later that same day iOS 8.0.2 came out and I installed it, hoping it would fix my iPad.

It didn’t. When I try to open the Facebook or Twitter applications on the iPad, they either don’t open for three or four minutes, or they don’t open at all and dump me back to the home screen. Half the time I can’t even open Safari, Apple’s web browser. Okay, pretty much anything that requires a Wi-Fi connection, including the Gmail app. I thought the problem might be related to the iCloud driver that comes with the new iOS, so I turned that part of it off in settings, but that hasn’t fixed a thing. Online apps like Facebook, Twitter, Safari, and Tumblr are 90% of what I use my iPad for. It’s like Apple disabled the Wi-Fi connection and replaced it with a dialup modem from 1993.

Last night I went on some Apple & Mac forums to see if other iPad 2 users have found ways to work with the new iOS. Chillingly, the factory forums are populated with hardcore Apple defenders who brook no dissent, no waving of dirty laundry. I did glean, reading between the lines, that another iOS iteration is in the works, so I’ll be patient.

You know, I’ve been an Apple enthusiast ever since I replaced my old Dell PC desktop with an iMac, following that purchase up with the iPad and most recently an iPhone. This is the first negative experience I’ve had with any Apple product, and I hope they fix it soon. I have to say, though, the cult-like vibes emanating from the Apple forums are more worrisome than a botched iOS upgrade, and make me wonder what I’ve gotten myself into.

Speaking of cult-like vibes, check out this guy. I can be an asshole like anyone else, selfish and self-centered. There are times when I think of my faults and marvel that I have any friends at all, let alone a loving wife and children. And then I read about someone who is truly awful, a monster of Jim Jones proportions, and feel better about myself. So if you need a self-esteem boost, read about the Reverend Ernest Angley, leader of a devoted congregation who let him get away with the most despicable behavior … and this is just one thing among many: forcing vasectomies and abortions on the men and women in his church lest they keep some of the money they’d normally put in the collection tray to raise children instead, oh, and being a pedophile who preys on the boys in his congregation good lord what the fuck is wrong with people and why hasn’t anyone hastened this man’s long-overdue rendezvous with Jesus in heaven?

I’ve said it before and I’ll say it again: God save me from all these good Christians!