Donna and I wake up around six. Our bed is situated so that the first thing we see is the sun coming up through the sliding glass patio door in our bedroom wall. 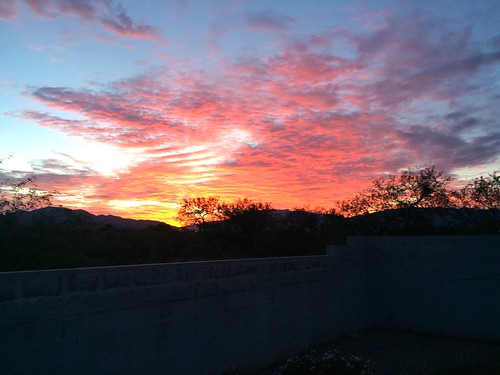 I jumped out of bed a few mornings ago, put on a bathrobe, and went out through the patio door to take photos. One of the dogs, meanwhile, went out through the doggie door at the other end of the house and was startled to find a man in her back yard. She started barking, which set off the other dog, who came out to join her. Even after they figured out it was me, they kept barking to make sure I knew I was somewhere I didn’t belong.

I’ve been out taking photos nearly every morning since, and the dogs have become used to seeing me on their turf. Sometimes I wake up and grab the iPhone, sometimes the small point & shoot digital camera, sometimes the big DSLR we treated ourselves to last Christmas. The top photo is from earlier this week, and was taken with the tiny iPhone camera. The next one is from this morning, showing the sun reflecting off the tops of the mountains to our north, taken with the big camera. 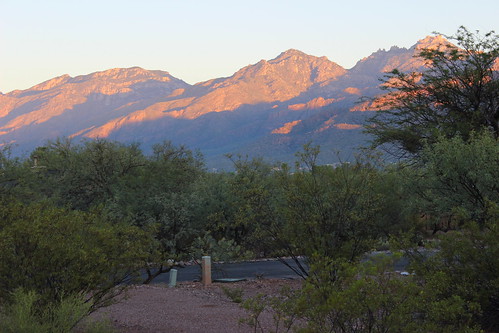 The iPhone has an HDR (high dynamic range) mode, and I believe I had it selected when I took the first photo. The Canon Rebel doesn’t have an HDR mode, but you can take HDR photos with it … I just haven’t learned how to do it yet, so the second photo is more true to life.

I love these beautiful sunrises. Sunsets are even prettier. I’ve been taking photos at the other end of the day as well. Here’s an iPhone sunset: 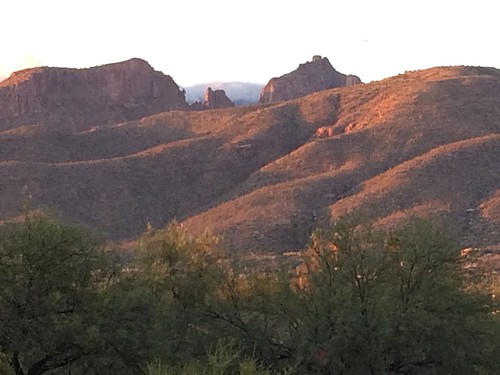 As I was writing, not ten minutes ago, the neighborhood bobcat walked past the window. It’s a big one, about the size of a German Shepherd, and looks healthy (we haven’t seen it often enough to determine its sex). I’m sorry I didn’t manage to get a photo, but it was staring at me through the office window and I was afraid reaching for the camera would spook it. Maybe next time.

Yesterday I took the dachshunds to the feed store, their favorite destination. This time of year there’s a galvanized livestock trough full of baby chicks in the middle of the store. The dogs aren’t tall enough to see in, of course, but they can hear and smell the chicks, and how they wish I’d buy them one, oh pretty please! I would if I thought the chick would survive their natural curiosity. No, no I wouldn’t, not really. Anyway, in addition to picking up a bag of dog food, I got them both new collars, big thick butch numbers. They were beside themselves to have me put them on, and after I did they pranced around the house all afternoon. Here they are with their colorful new outfits:

I hear that the anchor spot on one of the major Sunday morning TV political talk shows, Meet the Press, was offered to comedian Jon Stewart. He rebuffed the offer, and I’m glad he did. I don’t know what actual impact Stewart has as host of The Daily Show, but he’s good at expressing our frustration with the idiots who run the country and the world … at least when he’s sitting alone at his desk, facing a friendly studio audience and an unhostile camera. I’ve noticed, and I’m sure you have too, that when he’s face to face with a powerful guest in the interview segment, he pussies out. He doesn’t ask the hard questions. He goes into “both sides do it” mode, just like any political pundit. I’ve seen him back down over and over again, and I’ve concluded that at heart he’s just another villager, anxious to preserve his position of privilege and access to power. Well, I’d probably be the same way if the money was good enough.

That’s not much of a rant, but it’s all I’ve got today. Yes, everything is still horrible: this stupid directionless war, the fear-mongering and lies fed to us as news, the stupidity, the racism, the religious intolerance, the whatever. But ranting about it won’t make a bit of difference or have the slightest impact. All I can do is try to live up to Kurt Vonnegut’s exhortation from God Bless You, Mr. Rosewater: “There’s only one rule that I know of, babies—God damn it, you’ve got to be kind.” Would that we all could live up to that.