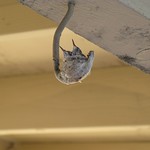 Both hummingbird chicks have flown away. The bicycle hook nest is empty. A friend told me new chicks sometimes come back to the nest at first. We observed that with one of the chicks from an earlier hummingbird nest in June. I remember thinking, “Surely that bird should have learned to fly by now,” and then right before my eyes it did fly. According to my friend, it probably had been flying for a while.

With that in mind I announced I’d wait a week before knocking the nest down, just in case the chicks still think of it as home. Donna said I should leave it alone. One, she likes seeing the nest, even if it’s empty. Two, Mother Nature knows best and if I intervene it’ll change the equation in unknown ways. She’s right, of course. The old nest stays, and next year’s mamas can deal with the cleanup. I’ll content myself with hosing the dried hummingbird shit off the patio floor.

We’re in the heart of southern Arizona’s monsoon season, but most of the rain has fallen in other neighborhoods. We get lightning, thunder, and the occasional spatter, and I guess that’ll have to do. Would that we could turn our sprinklers off and not have to add water to the pool every few days.

Some day the southern Arizona water table will be exhausted and the entire region will have to be evacuated. We’ll be refugees. I wonder if people up north and back east will set up immigration checkpoints and try to keep us out. No, not really. I don’t wonder at all. I know they will. People suck. 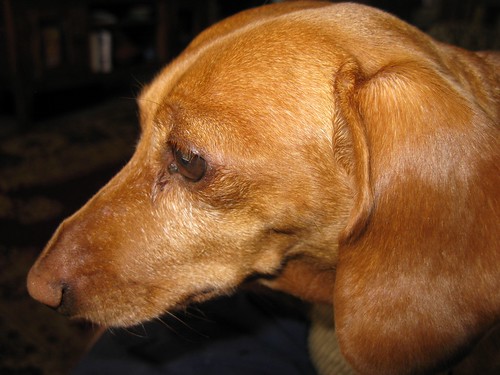 Dogs don’t suck, thank goodness. That’s Schatzi, who is nine years old this month. In dog years she’s catching up with us. I hope her knees don’t bother her! Chewie the cat was born in August too, we think, which makes her nineteen, an elderly cat. She howls a lot and spends most of her days curled up in Donna’s bathroom sink. Doesn’t seem to have any problem leaping up onto the bathroom counter, though, and she always puts in an appearance at mealtime.

Parts and pieces for my next motorcycle maintenance session are arriving daily. Just waiting for the new tires, which’ll probably come today. Have I mentioned how much I love online shopping? I get motorcycle parts from a Honda dealership in Ohio … good prices, fast and free shipping … and have been a loyal customer since 2001. For everything else, though, I use Amazon. You can accuse me of drinking Jeff Bezos’ Kool-aid, and that’s fine. Beats the hell out of schlepping all over town. Seriously, I wonder if the growth of on-line shopping is making a dent in overall fuel consumption and emissions. It certainly saves this one shopper a bundle of gas money.

I’ve put in over 1,000 hours of volunteer time at the Pima Air & Space Museum, graduating from a laminated card stock name tag to a spiffy metal badge. They even spelled my name right! 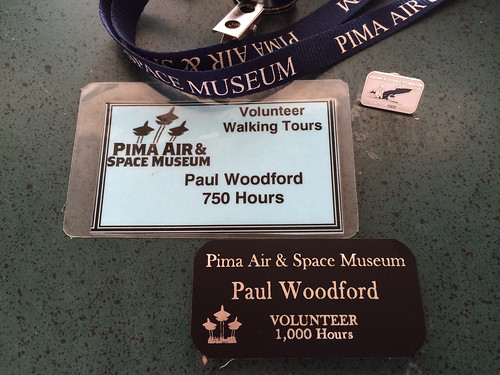 Mainly, though, I’m just happy I no longer have to wear that damn lanyard around my neck. I must have been choked as a child … I hate having anything around my neck. Thank goodness they don’t want us to wear neckties!

During my first year at the museum, I worked one day a week, five hours at a time. That added up to 260 hours a year. I’ve been there three years; at that rate I’d still be well short of a thousand hours. For the past two years, though, I’ve also been team leader for the walking tour docents, and the extra work that goes with that … scheduling, resolving conflicts, evaluating new members and giving annual recertifications to team members … is what hurried me along to metal badge land. I’m planning to turn team leader duties over to another member this October and go back to working one day a week. I still love the work, still love talking about airplanes and occasionally writing about them.

Actually, I’m fishing around for an airplane or aviation-related topic to write about. Any suggestions?

A while back, I posed this question to my friends on Facebook: Since “it’s” is a contraction of “it is,” why don’t we say “it’s what it’s” instead of “it is what it is”? No one had a good answer. Certainly I’ve never seen or heard anyone use “it’s” that way. I did see this interesting iteration of “they’re” on Twitter, though, used in the same way: 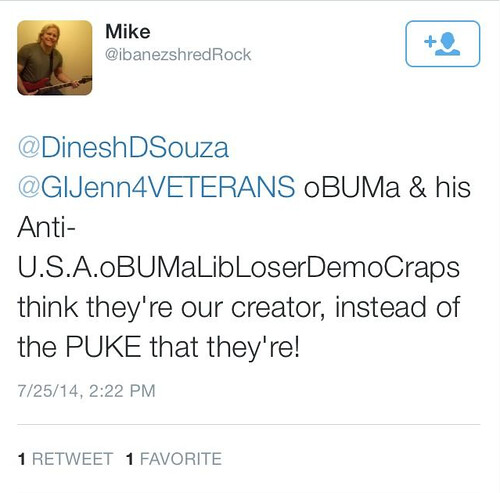 Too bad the fellow’s political views are so retarded. Otherwise we might have been linguistic soul mates!